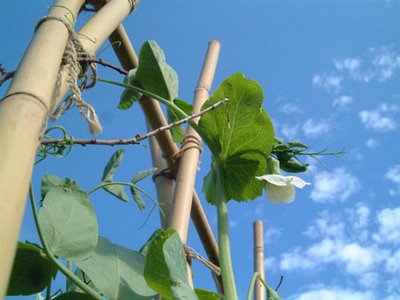 In the last few days the weather has been much warmer and sunnier than it was through most of August, which is good news for the tomatoes (warmth is one of the things that triggers ripening) but has resulted in a significant increase of powdery mildew in my pea crops. To be honest, mildew is pretty inevitable if you grow peas late in the season in England, because it thrives on warm dry days and cool nights (especially if there's dew overnight) which is exactly what you get in an English September. I tried planting my late pea crop with a wider spacing than usual to improve ventilation around the plants, but they have still ended up coated with white powdery yukkiness. Alderman, a goddess among peas in every other respect, is particularly susceptible.

There are two basic types of mildew: powdery and downy. How can you tell the difference? Powdery mildew affects both sides of the leaf whereas downy mildew usually appears just on the undersides. Downy mildew is spread by sploshing water, whereas powdery mildew is airborne.

The one attacking my peas is the powdery type. And it's also having a go at my butternut squash.

Powdery mildew is a parasitic fungus (how charming) which spreads on wind-borne spores. The spores insert tubes into the leaf tissues and leach out nutrients. It can spread itself right through a crop in less than a week and causes a reduction in yields, and in extreme cases will kill the plants.

Normally my approach to mild outbreaks of things like this is to ignore them. In a balanced organic garden a lot of common minor diseases take care of themselves. In this instance though, I think the mildew is sufficiently bad that I have to treat it. A few weeks ago I had a very helpful tip in a comment from Bill and Libby, which I'm reproducing here:

"Looked up the specifics for milk- water treatment for powdery mildew: 1/4 c. milk plus 3/4 cup water, spray once a week. Once treatment is under way, a weaker solution will suffice. (When exposed to sunlight, a protein in milk produces oxygen radicals, which act as a natural fungicide.) Seems simple, anyhow.... from Herb Companion Magazine www.herbcompanion.com."

So that's what I've been trying today ... painting my mildewed peas with diluted milk! I'll report back on how they get on. 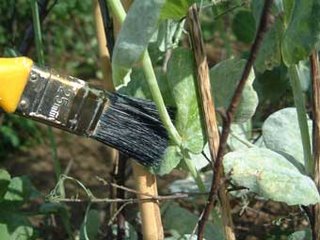 Treating mildewed pea plants with milk and water. I found it easier to paint it on with a brush as I've got a relatively small number of plants, but it can also be sprayed on.

Some research at Cornell University suggests that bicarbonate of soda works quite well too. Three teaspoons of baking soda in a gallon of water, sprayed on once a week. They don't specifically mention using it on peas, but it might be worth a try.

Because of the prevalence of mildew in the British climate I've been intending to make mildew resistance a factor in my pea breeding projects. I only know of one heritage variety, Ne Plus Ultra, which has resistance, but there are also quite a few modern varieties I can use to transfer the genes into my own stock. Powdery mildew resistance involves two recessive genes, officially known as er-1 and er-2 (catchy, eh?) and according to information from the Government of Alberta there is no such thing as partial resistance. It's either resistant or it isn't. But in practice it can't be quite that simple, because I'm seeing different levels of infection in different varieties grown together, with Alderman being the worst affected and Golden Sweet having hardly any, and the purple-podded types falling somewhere in between.

There are a few measures you can take to reduce the impact of powdery mildew. Growing resistant varieties is the obvious one. Keeping a good air circulation around the plants helps. And as water inhibits germination of the spores, a good soaking of the plants on a regular basis will help (not with downy mildew though ... it'll make that worse). Lush plant growth is especially vulnerable, so it's a good idea to avoid too much fertiliser, particularly nitrogen. When the crop is finished infected plants should be removed and not dug into the soil.
Posted by Rebsie Fairholm at 10:50 pm

Wow Rebsie...you do take your hobby seriously don't you.

Gregor Mendel would be proud of you!


I just try and grow nice looking veg. I don't much care where it comes from, or even in some cases, what it tastes like. I just like an impressive looking plot..... Sad little attention seeker that I am....LOL

By the by, and apros pos of nothing at all - "Imber" ...?From the lost village, smothered by the Army, on Salibsury plain...or some other Imber?

I am in awe of your knowledge and your willingness to hand paint the milk mixture on your pea vines. We don't have too much trouble with mildews here, except on common lilac. Good luck and perhaps one day, some seed house will be selling a variety of peas (or potatoes) called "Rebsie"

Well done for spotting the origin of the "Imber" title. We did indeed name it after the village which was stolen from its residents by the military in the 1940s, and which remains an isolated ghost town with most of its features shot to pieces. Symbolically it's a place stuck on the outskirts of its time and culture, which is kind of what our music is too!

I do hope I'll be able to breed new vegetable varieties that are worthy of wider distribution. That would be nice.

Interesting that you don't have much trouble with mildew in your part of the world ... but then over here we don't have to contend with raccoons!

Any conclusion after the milk bath? I used baking soda & water some weeks ago and it seems to slow down the powdery mildew. Noticed it was back in full force today so sprayed again (yes spray action, small bottle w/sprayer, vs. painting on). I'll watch these next few days to see if I can tell any difference.

Yes, the milk and water method seems to be working ... it's certainly killed off the mildew and slowed down its spread. It's come back with a vengeance in the last couple of days so I treated the plants again this morning. It only works on contact though, so it needs thorough coverage to be effective ... which probably means spraying is better.