Today in the garden ... colour magic 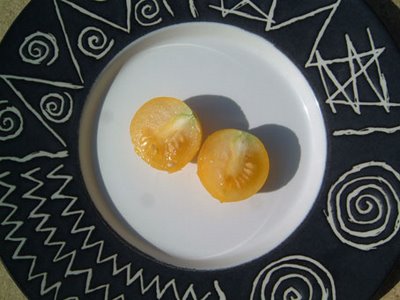 I was able to try the first ripe Clementine tomato today. It's a French cocktail tomato, a deep golden yellow. Lovely tangy flavour too ... and just as it says in the catalogue, it tastes distinctly citrusy. Very nice indeed and a lovely colour.

When I do my Heritage Vegetable Reviews they'll be divided into three categories: the exceptionally good, the perfectly adequate and the stuff consigned to the metaphorical compost. And I don't mind telling you that the last category is where I was planning to put this year's heirloom runner bean, Black Magic. Its yields have been very poor ... although next door has also had poor yields from his runners which are a different variety, so it may just be one of those years. But the notes I've been making for the reviews are along the lines of "stringy as hell" ... "unchewable" ... "flavour not much to write home about". It's not a bad looking plant. Left to their own devices with plenty of water the pods will grow to a huge size (some of mine are just over a foot long) but if you want to actually eat them you have to catch them while they're still very small. Otherwise you'll be chomping on a mouthful of green gristle. Yep, I was not impressed with this variety.

But then I wondered what they'd be like if I just left them to mature for a bit and shelled them out, like I did with the other climbing beans. I've never heard of runner beans being used like that in this country, but there are apparently people who do it in other parts of the world, so presumably they're not poisonous. I shelled out a couple of the pods which were way too large and knobbly to eat as green beans and whoooooooo! The beans were an amazing dark midnight blue. I shelled out another pod and the beans were practically fluorescent pink. Wowee!

Black Magic beans change colour right through their growth cycle. The pink develops early on in the green pod stage and at some point as they get bigger they darken quite suddenly into a graduated dark blue like the night sky. When they are fully mature they are a shiny, burnished black. I mean really black. They are very beautiful and large and lovely to handle. 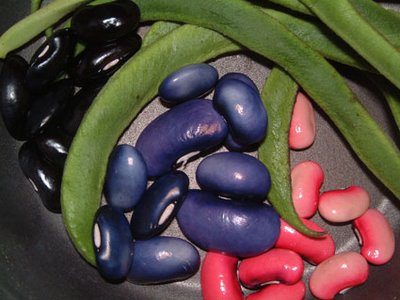 The four colours of Black Magic

But colourful beans are not just for looking at, so they went into a pan of unsalted boiling water for five minutes and ended up as a delicious vegetable with a similar size, texture and flavour to butter (lima) beans. It's not a refined texture in this case, but it's substantial and very tasty. And no string!!

As is so often the case, the colour doesn't survive the cooking process. On contact with boiling water the beans turn an inky mauve regardless of what colour they were to start with.

But anyway, Black Magic may not be consigned to the C-list just yet. It's an open verdict.
Posted by Rebsie Fairholm at 11:42 pm

Mmmm... That tomato looks yummy! I will have to try those next year.

I am intrigued by the tomato, it looks delicious. I go back and forth each year trying to decide between "tried and true" varieties I know I can count on or planting new varieties that might not do so well. I think I'll try this tomato.

And those beans are pretty!

Hi Hanna, hi Carol ... I have plenty of spare seed for the Clementine tomato, so if you want to email me a postal address I'd be very happy to send some to you.