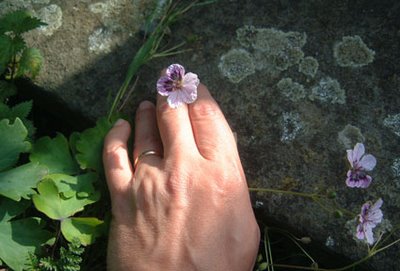 About time I put up another flower picture. This erodium was given to me by a friend who breeds them.

Dangnabit! Just as I was moaning about my peas being afflicted with mildew I find the first case of the dreaded blight, the curse of every potato and tomato grower. One of my tomato plants has got the telltale dark brown stems on some of its fruit trusses. I've spotted it quite early, so I'm trying to slow it down by cutting off and throwing away all the affected leaves, stems and fruits. But blight is one of those things you can't really do much about ... once you've seen the symptoms the spores are already thriving on your plants. And in a bad year it can wreck a crop in a matter of days.

As a precautionary measure I've been harvesting all the maincrop potatoes, which have mostly been Fortyfold, the most ancient of ancient spuds. I have a late crop of Mr Little's Yetholm Gypsy on the go which will just have to take its chances. I have enough seed stock of that for next year already, safely harvested long before the blight season. Indeed I have enough that I can probably spare some to give away to anyone else who wants to try it. I'll post more about that soon.

I'm sure I'm not the only one who is currently obsessing over what to plant next season. I've been buying stuff in for weeks, in fact. And the first of the 2007 catalogues arrived this morning, from Thompson & Morgan. It's nice of them to keep sending me one as it's been a few years since I ordered from them, although I do buy their (flower) seeds from garden centres sometimes. Rather than browsing the catalogues to find new stuff I tend to research the heritage varieties first, choose the ones I want to grow and then try to find a supplier. My favourite veg seed company is Chase Organics and I also pick up heritage seeds from lots of non-mainstream companies, a few informal seed swaps and, of course, the Heritage Seed Library. This also gives me an excuse to collect a dozen or more catalogues which I slobber over throughout the winter months for my gardening fix. 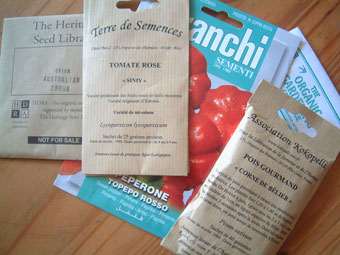 I was intrigued to see that Franchi Sementi (Seeds of Italy) offer a variety of butterbean (that's a lima bean to folks across the Atlantic) on their UK website. Intrigued because butterbeans are supposed to take fright at the hideous British climate, and so you rarely see them for sale over here. Has global warming really got that bad, or is this some new Brit-friendly variety? I had to order some out of curiosity. They arrived in a box rather than a packet, most of which is printed in Italian, under the name of Fagiolo di Spagna (Spanish beans?) of a variety called Spagna Bianco. Just about the only words of English on the box are "climbing French bean" (that's pole bean to folks across the Atlantic), and that could well be the answer to its ability to grow in the UK, even if you're now thoroughly confused by the whole concept of Italian Spanish French beans. Butterbeans are of the species Phaseolus lunatus (moon beans!) which are too delicate for cold climates, while climbing French beans are Phaseolus vulgaris (vulgar beans!) which will grow over here quite happily once the soil warms up in spring. Looking inside the box (how could I resist?) the beans are very large and creamy white and do look very like butterbeans, even if botanically speaking they aren't. 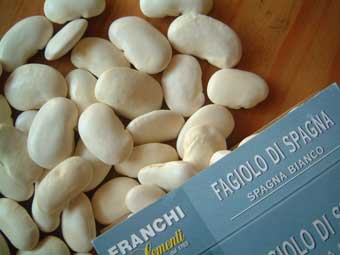 I can't wait to hear how the Italian Spanish French butterbeans will do in your section of the English climate.

I think you should call them Lima Beans, just so you can throw Peru into the mix..... :-)

Yep Rebsie.....you lost me a while back. You sure it's not white spaghetti? Very curious to see how Spagna Bianco turns out.

How do you store your seed potatoes so they are in good shape to plant out say next April?

Blight - perfect weather for it, moist warm and humid. Took a gamble last week and left my main crops on the allotment in. Won't get down there until Friday evening at least and I fear the worst. But I might just get away with it.

To store seed potatoes, I think the key thing is to leave them in a bright sunny place for a few days when they're newly harvested, to green them up a little. This helps to dry out and toughen the skins and puts them into dormancy mode.

If you then put them somewhere cool, dry, dark and frost-free for the winter they should stay in good shape. Sometimes they do develop tiny sprouts, but as long as they grow slowly it shouldn't matter.

Fingers crossed that the blight hasn't reached your allotment ...

so what has happened with your Spagna Bianco beans?