Today in the garden ... scrumpy 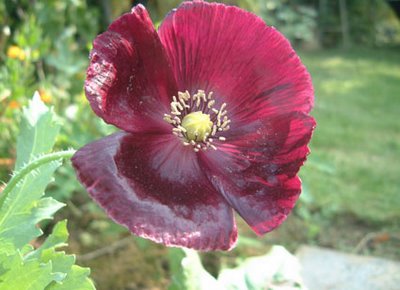 I thought I'd seen the last of the poppies this year, then along came this translucent purple-black opium poppy. It self-seeded from Black Paeony, which is a fully double (frilly headed) variety, but this one has come out single-flowered. That's poppies for ya!

My Black Plum tomatoes are finally showing signs of ripening after what seems like weeks of sagging under the weight of large, dense, bell-shaped green fruits. They have now taken on a dusky dark orange hue and look quite unlike any other tomato I've seen. There's also one missing from the biggest truss, although there's no sign of it on the ground. I've noticed this a few times now, semi-ripe tomatoes disappearing off the vine overnight never to be seen again. Either some critter is scampering off with them or my neighbour has been using a stick with a hook on the end to scrump them through the fence. (Me? Paranoid?) 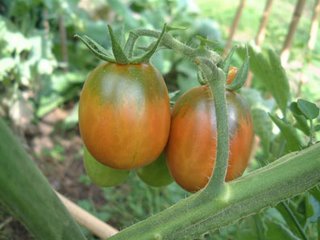 Black Plum contemplates the possibility of ripening. And yes, it is meant to be that weird colour.

Meanwhile I've been keeping a close watch on my one and only Taynton Codlin apple, because it appears to be naturally green all over and therefore difficult to judge when it's ripe (and unlike tomatoes, you can't really squidge them to see how soft they are). This morning when I did my tour of the garden I found it had fallen off the tree altogether, which I took to be a reasonable indication of ripeness. So ... only a few months after I bought these trees as flimsy twiggy one-year-olds I am doing my second heritage apple tasting. I had expected to have to wait about five years.

One thing I need to explain about this apple is that I know next to nothing about it. There is no information out there, it's so rare. It's not listed in my apple encyclopedia, nor on the Brogdale National Collection database, so when I eat it I'll be biting into uncharted territory. All I know about it is that it originated locally in about 1700 and it's a cider/cooking apple, which could mean anything really. My mum, who is a Somerset lass and knows a thing or two about cider apples, says it probably means it'll have a tartness that takes the roof of your mouth off. Sounds good to me!

The first striking thing about this apple is the scent. I don't think I've ever come across a more aromatic apple ... just having it on my desk it's filling the room with exquisite appleness. It's a beautiful aroma, quite different from the bland crap you get in the shops. Unlike the Tewkesbury Baron, which I photographed from a particular angle so that you couldn't see the brown blotchy bits on the other side, this apple is flawless. It has natural lumps and bumps as befitting a 300-year-old cider apple but not a single blemish. And it was organically grown too. I'm impressed. 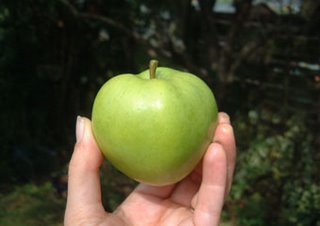 The skin is quite waxy and although it has a dull matt sheen it polishes up to a high gloss. The colour is a really bright pea green which is consistent all over.

I will do a taste test but in all honesty it smells so good I just have to leave it sitting on my desk for a couple more hours ... *sigh* ...

6 hours later ...
Mmmm, wonderful! The skin is a bit on the chewy side, and the pale green flesh oxidises and browns very rapidly, but the flavour is fantastic. Very acidic, very sharp, with none of the crabapple dryness I was expecting. A real acid-drop sensation with an intensely appley flavour. It's definitely not for the sweet-toothed but it's very very lovely. The flesh texture is crunchy and juicy. And if this is what our rustic ancestors used to make cider with then it's a wonder they didn't just sit around pissed all day. (Oh, er, actually ...)

What a joy it's been to rediscover these old apples. I pretty much stopped eating apples many years ago because I can't stand the homogenised supermarket varieties, boring and sweet and watery. I don't even like the mushy and over-rated Cox which is about the only old-fashioned English apple still readily available. In recent years I've found a local farm whose orchard shop sells a decent range of apples which taste massively better, and it's worth going there just to listen to the farmer's "I can't believe anyone really talks like that" Gloucestershire accent. But the fruit on these old local varieties, which I didn't even have a chance to try out before I committed to planting them, is out of this world.
Posted by Rebsie Fairholm at 11:55 pm

I'm so glad you actually bit that apple, and told us about it. I was going to have to accuse you of being an apple tease.....

We have lots of apples in Michigan, and even apples that are inedible (in my humble) when purchased at the grocery store can be quite nice, freshly picked. Golden Delicious would fall in that category. Local, newly picked, with a blush of pink, they are crisp and not-too-sweet and lovely. We have some Jonamacs right now, that I would have predicted would be nasty, but they are newly-picked, local, and very good.

Winesaps are my favorite, though. They won't be picked here until the middle of next month, and only appear at the farmers' market for a couple of weeks.....

Love the poppy, too!

Hi Vicki (glad I know your real name at last!)

Yes, I have heard that apple flavour can vary a lot depending on where it's grown and how fresh it is. Golden Delicious (or Golden Revoltings, as I used to call them in early childhood) seem to epitomise everything that's most horrible about watery commercial apples, so it's interesting that even they can taste good when produced in the right conditions. Winesap is a variety I'm unfamiliar with ... *goes to look it up in book* ... aha, it's apparently a New Jersey variety from before 1800 but it doesn't ripen properly in the British climate, so that probably explains why we don't see it over here. Sounds gorgeous though!

She Who Digs said...

Thanks for your words of encouragement, I just wish I could make more time to get it all prepared ready for next season! I’ve badly neglected my gardens at home this year and they need a bit of TLC to get them back under control!

Your blog has some fantastic photos on it! You really have an eye for colour and contrasts and I especially love your Black Magic beans! Thanks for linking to me- I’ve now put you on my list.

I read your comments about your Codlin apple with interest, as I have a very old Codlin tree in my garden which fruits like crazy! How do you know which Codlin variety yours is? I'm trying to identify mine, but believe it to be a Keswick Codlin... It may not be because the apples are huge and elongated rather than round, but (like all Codlins) it has the line running down one side of it like it was made in a mould. have you discovered an informative site on the history? I would be keen to know more about the varieties.
thanks Bill Curtis