Today in the garden ... legume love 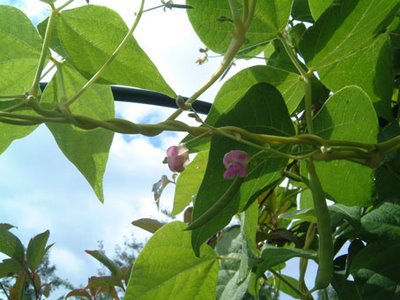 In all my progress reports on climbing beans, there's one variety I've barely mentioned since the early posts. Meraviglia di Venezia is an exceptionally late maturing variety (September/October is normal), and is only now starting to produce flowers and set pods. The one on the right in the photo is literally the first. It's pale green at the moment, but it will mature to a creamy golden yellow with wavy edges. When the beans eventually mature they will be shiny and charcoal black. Although it was one of the first beans I planted way back in early spring, and all the other beans have been podding like mad things throughout the summer, Meraviglia di Venezia initially put on a rampant scramble for the top of the fence (and over into next door's garden) and then remained resolutely committed to being a huge pile of leaves. When its season is right, however, it starts throwing out pods at a rate which make up for all the months of inactivity. It's a large plant with yellowy stems and lime green leaves which will elbow any other nearby plants out of the way. The flowers are pinky mauve and turn flesh pink as they mature; not the prettiest in the garden but decorative enough.

At last the first tomatoes are beginning to colour up (Pink Jester is the only one showing any interest in ripening). I was thinking I'd have to change the title of the blog to Daughter of the Unripe Tomato. They are very light-sensitive and as the weather has been so overcast throughout August they haven't been progressing as well as I'd hoped. They're still showing far more interest in spurting sideshoots from every available orifice than they are in ripening their existing fruit. They're even sprouting sideshoots from their fruit trusses, which is a bit daft. I've given them a good talking to. I've explained that they're not in their native South America now, they're in a cold damp country with a short growing season and they'd better get on with it.

But while the climate has not been kind to tomatoes it thoroughly suits the peas.

I've really fallen in love with pea plants this year. I never had much luck growing them in the past. They always had tiddly little pods with snail trails all over them ... the yields never seemed worth the effort or the growing space. All the varieties I grew were conventional ones whose growth habit is short and bushy and which ripen all together ... which is great if you're a commercial grower and you want to mow the lot with a tractor, but has no advantage to gardeners. The real revelation has been trying the Victorian tall peas for the first time. Their yields and their beauty don't bear comparison with a modern commercial pea.

I'll definitely be trying more tall heritage peas next year. Alderman is part of a group of 5-8ft tall voluptuous peas known as the Telephone group. Telephone may sound like a strange thing to call a group of peas, but probably didn't seem so in the context of the time. It would be a bit like having a new pea variety today called iPod.

I've found that Franchi Sementi do a variety of tall pea called Telefono, which is presumably related. It looks very like Alderman if the picture on the packet is anything to go by. But if it's been grown in Italy for any length of time it will be a sub-strain, and it'll be interesting to compare it with British versions of the Telephone peas. (Any excuse to buy another packet of seeds.) 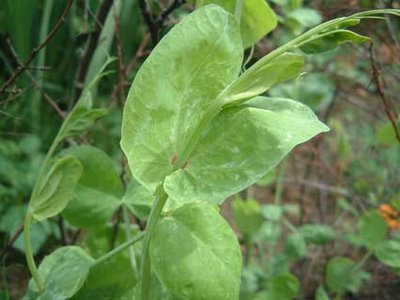 Ezetha's Krombek Blauwschok, of pre-1882 vintage, showing a ring of purple in the leaf axils. All the purple-podded varieties seem to have this, and the yellow-podded Golden Sweet has a larger double ring.

Meanwhile I've planted out all of my F1 hybrid experimental peas. They have only a trace of purple in the leaf axils ... less than the full-blooded purple-podded, but I should see a lot more purple in the next generation if I can get them to seed.

My latest crop of Alderman has just started flowering, and is thriving in the manky cloudy weather. Ezetha's Krombek Blauwschok is not far behind. I have high hopes of a bountiful pea-fest this autumn.

In addition to having a lovely garden, I'm lucky enough to live among some of the finest countryside England has to offer and I love going out for walks in the hills which surround Cheltenham in a semi-circle (and provide it with its pleasant microclimate). 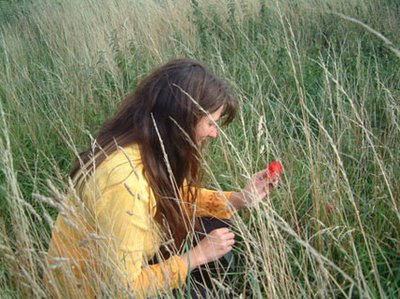 My husband is used to it by now ... every time we go out for walks anywhere I'm constantly diving into the undergrowth to look at plants. 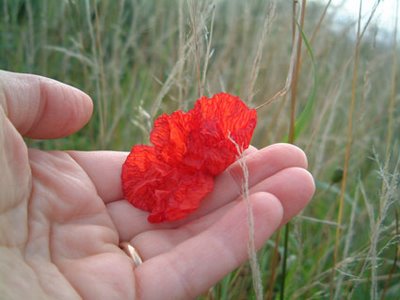 And this is what I was so interested in. It's a common British field poppy, Papaver rhoeas, but a very special one with dark red stripey veins. My eye was initially caught by its unusually intense colour, but the extraordinary flame-like pattern was an amazing find. I feel very privileged to have seen it.
Posted by Rebsie Fairholm at 11:39 pm

I just adore the wild poppies. They have been growing in my garden since we moved here, with no help from me. I'm happy they decide to live here with us!
Love the crinkly petals on that one!

I've seen it now in many other blogs, and it was true for me too. This was a lousy year for tomatoes but great for cucumbers. My peas did well too this year.

As far as peas go, one of the most common reasons I've come across for a poor harvest is lack of nitrogen fixing bacteria in the ground. Maybe this is a silly question and not that I would want to advocate commercial varieties, but maybe this is the reason you had problems in the past? It's just an idea. Maybe you grow enough beans this isn't an issue.

I love your blog. It's lots of fun to read what's going on in your garden.

I love wild poppies too! And that one was a real beauty.

Hi Patrick ... thanks for the lovely comment. I only recently discovered your blog but I've been very impressed by it. Nice to meet somebody else who does vegetable trials!

You could be right about the poor pea harvests in the past being caused by lack of soil bacteria. This is the first time I've grown peas in my current garden, and I dug in lots of horse manure before I planted them, along with seaweed meal which stimulates bacterial activity. I'm consistently finding that looking after the soil before you plant anything makes far more difference to the crop than anything you do to the actual plants. But when I first grew peas a few years ago I didn't realise that.