I'm currently writing up an article about making your own tomato hybrids, and I'm just going off on a related detour for a moment.

There's a lot of conflicting information about how readily tomatoes naturally cross-pollinate. Some gardeners swear they never do, while others report getting weird hybrids showing up when they least expect it. I've even bought a packet of baby cherry tomatoes from a major seed catalogue and had them grow into beefsteak-style monsters. Tomatoes are essentially inbreeders and have no biological imperative to cross-pollinate, but clearly they sometimes do.

Well, in the last few weeks I've spent a lot of time on my hands and knees staring into tomato flowers, and I think I can see how a lot of the confusion arises. Tomato flowers may appear pretty similar ... those little yellow cones and star-like petals are much of a muchness. But once you start peering at them closely, and more importantly, taking them apart ... you find there's a heck of a lot of diversity between varieties which potentially affects their pollination habits. And not only does it vary between varieties, it may affect them differently from garden to garden and with the weather and a whole lot of other factors. Which would explain the reams of conflicting information about whether/how tomatoes cross. 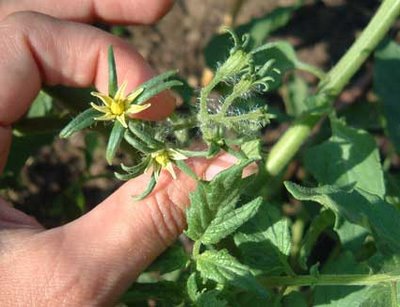 Tomato flowers all have the same basic structure. The yellow cone in the centre is made up of anthers which are fused together. In most cases the cone is sealed all round so that insects can't get in, and the pollen is shed on the inside. Under normal circumstances the pollen falls straight onto the stigma (which is enclosed inside the cone) without ever coming into contact with the outside world. And that's why tomatoes rarely cross-pollinate.

But ... sometimes they can. These are the observations I've made on my own plants ... pollinator activity varies hugely from garden to garden.

Tangella, as I've mentioned before, has oddly structured flowers. The sepals are curled over backwards even in the earliest bud stage, and as the flowers develop the sepals remain hugely longer than the petals. On the inside though, the reproductive bits of the flower are pretty normal and average. It's a nice easy one to hand-pollinate because the pistil is large and the stigma very obvious when it's receptive. But the curliness isn't just in the sepals; the anther cone also curls outwards at the very tip, and that creates a small hole, big enough for a small insect to get inside. So although the pistil is short enough that it remains just inside the cone and may not be reachable by bees, it could theoretically be pollinated by something else.

Clementine has smaller paler flowers than average which grow in unbelievably massive trusses. The anther cones are compact and stay tightly closed, so self-pollination is assured. But ... unlike all the other tomatoes I'm growing, Clementine attracts bees. Particularly bumble bees. They don't get a lot of joy out of it because the flowers are tight shut and I've had a few amused moments watching them desperately paddling their legs on the petals trying to get in. But they keep coming back, and if they really want to get at the pollen they may bite their way through the anther cone, which would be the first step towards cross-pollinated tomatoes.

Black Plum produces quite generous amounts of pollen, even in cool weather. It has an anther cone which is fairly open at the end, and a pistil which is long enough that the stigma is flush with the tip of the cone and therefore accessible to pollinating insects. But in my garden the insects don't go near it. So I would say Black Plum is biologically more geared up for cross-pollinating than most tomatoes, but what with throwing so much of its own pollen around and lacking insect allure I think it's still most likely to self-pollinate. But in certain circumstances I could see it hybridising like mad.
Posted by Rebsie Fairholm at 10:08 pm

Have you got you very own tomato plant yet? If so what do you call it . Do you write ? I try to write and pick , and grow a veggie garden each year .

I planted a red tomato-which grew a green tomato-which turned yellow & went rotten on the vine. the next one that grew, i picked when it reached a light green-it was mild & sweet..& the only other flowers around it could have pollinated with were the honeydew vine! I planted another red tomato-out by the compost heap-it grew a fine bell-shaped orange tomato..about 3 cm long, one cm across-the only flowers around it could have pollinated with was the vine growing over the fence, with orange bell shaped flowers..about 3cm long, one cm across!! Go figure!!( i wasn't game to eat this tomato, was worried it might be toxic!)