Today in the garden ... the phantom rummager 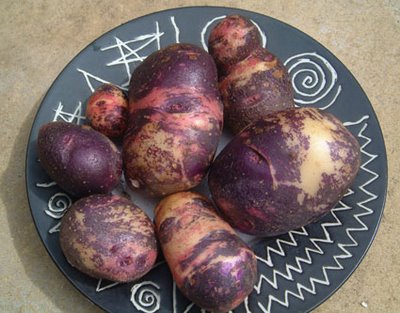 On the whole I've had a slow week in the garden again. The muse has been upon me and my hands have blisters from guitar playing.

But a mystery is unfolding out there. Every night some unidentified critter has come along and ransacked the pots on my patio. It's wrecked several trays of seedlings and pulled stuff out of tubs. And now it's taken to digging out seedlings in the garden too.

I assume it's a small nocturnal mammal of some sort, but I don't know what it is or what it's looking for. It doesn't eat the plants or their seeds, it just rummages about in the soil medium, casting aside any seedlings which get in its way, then buggers off. Leaving me to replant everything in the morning.

The first thing it went for was a large half-a-beer-barrel tub in which I'd sown some nasturtiums and California poppies. The whole lot got raked out night after night no matter how many times I resowed it. Then while I was away in Wales it hoiked a good sized Sweet William seedling out of its pot which I'd been nurturing for months.

I thought I'd foil the little blighter by putting the seed trays on top of a large wire cage I have in the corner of the patio (I use it to thwart the snails in spring). But it managed to get up there and drag all the seedlings out of their pots again. I have one safe place ... the top of a patio table ... and that's where I'm keeping my precious experimental pea seedlings. Everything else gets rummaged.

So I'm baffled ... and somewhat fed up with having my horticultural efforts wrecked on a nightly basis.

I planted out some more pea seedlings this week, since Ezethas Krombek Blauwschok is already producing good sized plants and I have a new batch of Mr Bethell's Purple Podded on the go. At this time of year the priority is to get stuff into the ground so that it can make the most of what's left of the growing season ... very different from springtime, when I let things grow for longer in their pots to give them a sporting chance of surviving the snails. Snails are now being efficiently controlled by the frogs and slow worms and aren't a problem. So the only hindrance the plants face now is the phantom rummager, which has hoiked several pea seedlings out of the ground altogether and dug neat little scrapes around the bases of all the others. Bastard.

The patch of ground recently vacated by the onions is now becoming a pea patch. I'm planting them out a bit more widely spaced than the earlier crop, in the hope that keeping a bit more air circulating around them will minimise the impact of powdery mildew. My experience is that most heritage varieties have poor resistance to it (one exception being Ne Plus Ultra and I'll be trying some of that next year) and this late crop is more at risk since it'll be setting pods in the moist autumn weather. But the peas are certainly hitting the ground running ... they grow very quickly at this time of year, especially if you keep them well watered. I dug in some manure and seaweed meal beforehand to enrich the soil. I've run out of pea sticks though and had to cut some new ones from an obliging tree. Fortunately the Ceanothus tree had a ready supply of dead branches of exactly the right size, and has just the kind of straggly spindly twigs that peas love. 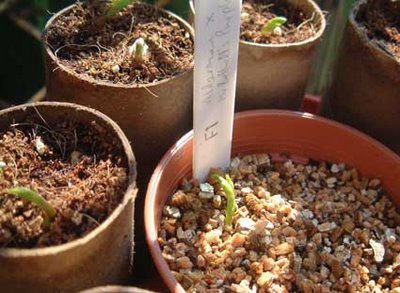 A fanfare please for the emergence of my first F1 hybrid pea! The ones in the tubes behind it are Golden Sweet ... no germination problems at all with those.

The pea in question was one of those huge ones which appeared in the photo in my 28th July post. You saw how big it was straight from the pod ... well it swelled up even more when it was planted. I can see it under the vermiculite and it now looks more like a grape than a pea. And the good news ... you can't really see this in the picture, but the emerging seedling has a distinct purple blush on the leaf veins. That means it's definitely the result of a successful cross, because it came out of an Alderman pod and pure Alderman seedlings don't have any purple on them at all. And secondly it's consistent (so far) with what I'd predicted, that the F1 offspring are expressing the dominant A gene which enables purple colouring.

It's interesting (well it is to me anyway) to compare it with the Golden Sweet seedlings growing on the same saucer. They germinated much quicker, so although I planted them more recently they're at about the same stage. Thing is, although they're a yellow-podded variety they're showing more purple colouring in the stems and leaves than the purple-podded types. So Golden Sweet must have the same A gene as the purple-podded peas, which I should have realised as soon as I saw the purple speckling on the seeds. Gene A switches on the plant's ability to produce anthocyanin, the chemical pigment which produces red, blue and purple colouring; but a series of other genes, some dominant and some recessive, control where in the plant the colour appears. Presumably Golden Sweet has a gene which puts a splash of anthocyanin into the seed coat, and another that fills the flowers with it (the variety has unusual purply blue flowers), and another yet that keeps it out of the pods so that they express a beautiful golden yellow colour.

My non-gardening neighbour, whose back garden is a tangled mess of overgrown grass which he rarely ventures into, had some beautiful California poppies glowing amid the weeds earlier this year. Just the standard orangey-gold ones, but really beautiful specimens. I coveted some, but I was too shy to go round and ask for some seeds, and although much tempted just to leg it over the fence while he was out at work, I never did. But nature has provided; a self-seeded California poppy flowered in my garden today and showed itself to be the same type as next door's. I'm very chuffed with that.

And talking of poppies, I still have a few late flowers on the Mother of Pearl poppies but at this point in the season they often come out smaller and more crinkly than normal. Like this white one, which had smooth single flowers a month or two ago and has now produced this small frizzy double flower, which I rather like. 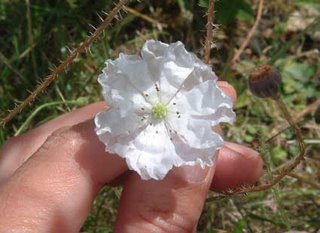 Posted by Rebsie Fairholm at 9:16 pm

I love reading about all this. Thank you for sharing it with us.

I wonder if your nocturnal marauder is looking for grubs or something in the soil? Seems odd that he is so interested in your pots that he'll climb things to get at them, with the whole of nature there at his disposal.....

I wonder if it would help to dig up some places you don't care about, loosening it for him, if he cares more about disturbed soil than about what may be planted?

Nice you got some California poppies growing in your garden now! I love those!
I've been following your story of the plantings of your peas, and I figured bush beans would fall into that category as well, being legumes. So I too have planted some late beans into empty places in the veggie garden. They seem to be doing well!
Oh.. and love the colors of those potatoes! So those taste good? I know you were dissapointed with the taste of the edsel ones.
Thanks so much for all the info, much appreciated.

Hi! I live in Western Pennsylvania and we are nearing the end of our summer. I should have had my cool season plants in already but have decided to do some planting today. I've covered my raised beds many times against the weather and should be able to get in some lettuce, spinach and chard.

I have decided to even go for broccoli! We'll see if it germinates in good time.

We also have trouble with nightly visitors. It was raccoons. They ate my summer squash right on the vine. When they began fishing my small pond and eating the fish, my son got rid of them for me. Two very fat raccoons.

They knocked clay pots off the deck that had flowers in them (large pots!) and did a lot of other damage as well. I don't like to interfere with nature, but I began to see them as outlaws.

How about setting up a peripheral zone of dilute poster paint and some white paper around your pots so that you can get the footprints of your night mystery guest? At least you would then know what you are dealing with(if no footprints, must be a bird, eh?)
And, have you tried the milk and water spray for your mildew? Was just reading about it in an herbal...

Hi I Need Orange ... I enjoyed reading about your plastic dinosaurs! Yes, I suspect you're right about the rummager looking for grubs of some sort, and that's a great tip to distract him with some loose soil elsewhere. I'll try that.

Hi Primrozie ... wow, I don't know that I've ever seen a raccoon ... we don't have them in the UK. I imagine they can do a lot of damage though. I hope your broccoli and other crops do well.

Hi Bill and Libby, wow, now there's an idea! D'you know it hadn't even occurred to me that it might be a bird ... but it could be ... they certainly can make a mess of pots when they're looking for nesting material. And thanks very much for the mildew tip, I wasn't aware of the milk and water remedy. And as my new Alderman seedlings are showing signs of mildew already I will probably have to try it.

Looked up the specifics for milk- water treatment for powdery mildew: 1/4 c. milk plus 3/4 cup water, spray once a week. Once treatment is under way, a weaker solution will suffice. (When exposed to sunlight, a protein in milk produces oxygen radicals, which act as a natural fungicide.)Seems simple, anyhow.... from Herb Companion Magazine www.herbcompanion.com.
Cheers...

I'm glad you enjoyed reading about the dinos. Thanks for visiting my blog!

I don't have any idea if disturbed soil in a less harmful place will help, but it seemed benign, at least.... I do wonder what it is!

ps -- count me as someone who likes hearing about your adventures in polination!