Today in the garden ... pollination fun 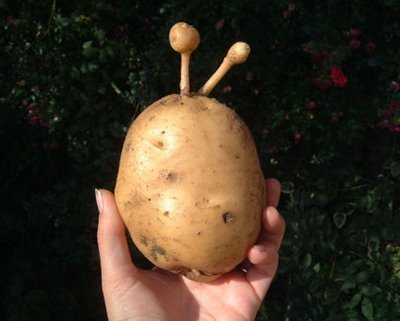 Evidence that Marfona potatoes have been infiltrated by aliens?

I've just harvested the remainder of the Marfona potatoes, having let them mature to baking size, and bloody delicious they are too, especially with a bit of melted cheese on them. In addition to some whopping spuds there were lots of baby new potatoes just starting to form (some of which I've planted up as they're too good to waste) plus a few more ripe potato apples for seed. They're very generous plants.

Alan Romans in his Potato Book describes Marfona laconically as "the slug's favourite". And he ain't kidding. I've found tubers which are completely hollowed out, and I'll certainly spare you the sight of the ones that have been adopted as community housing for woodlice. But ... invertebrates love Marfona for the same reason I do – it's the moistest and waxiest of baking spuds and the flavour is gorgeous. I wouldn't be without it, however many I have to toss into the compost bucket with a cry of "eeeuuurgh!" 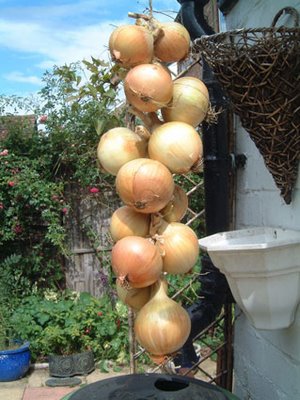 I learned to string onions yesterday, thanks to Greenmantle and the instructions he put up on his blog. I'm quite pleased with that. They're Hysam onions and probably the best I've grown yet.

I've been doing a lot of hybridising this week, trying to get the knack of hand-pollinating tomatoes (success!) and French beans (urgh!) so that I can write up the instructions here. I've never pollinated tomatoes before so I wanted to try it out first before writing it up to be sure I was doing it right. And the first couple of lots I did all fell off without turning into tomatoes, which shows how much I know about it. But I think I've now found what I was doing wrong, so I'll post the instructions here shortly. I hope this stuff is of interest to some of you out there. I would love to think I've encouraged people to have a go at hand-pollination and amateur plant breeding because I think it's really important, and it's a lot of fun. It's a great shame that the vast majority of gardening books don't even mention it ... while at the other end of the scale much of the useful practical information is buried in academic papers and you need a degree in biology just to work out what the hell they're on about. Most of what I know came from Carol Deppe's book and from getting out there with a scalpel and trying it for myself. I'm still learning all the time. I'm just pollination crazy and I'll hybridise anything that's biologically possible just for the hell of it.

I also love seeds and we're now getting into seed collecting season, which is one of my favourite times of year. I already have stuff drying on window sills all around the house, and am getting through huge numbers of little manila envelopes. I try to be disciplined about labelling things these days. I'm the most disorganised person in the whole of the west country, so nobody was more surprised than me when I suddenly created this boxed filing system one day last year on a momentary whim, after years of distributing my seed packets round every cupboard in the house and tucking them into bookcases. 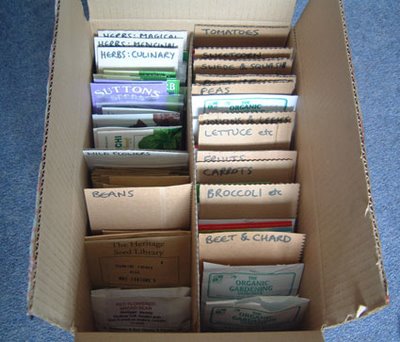 Posted by Rebsie Fairholm at 10:13 pm

Your onion string looks great..can't believe someone actually copied my made up method!

Have to say, that although I've seen your other blog quite a bit, this is my first visit here - what a revalation! You are SO knowledgeable! (Er - not that THIS suprises me of course, just that I had no idea about your site)

I normally stick stubbornly to linking other "Allotmenteers" on my own page, rather than at home "Gardeners", but I have to make an exception now .... great work Rebsie!

Hi Greenmantle and thank you!

Ooh, it would be great to have a link from your page, especially now you're a radio celebrity, heh heh.

I used to be an allotmenteer ... I'm just very lucky to have reached a stage in life where I have my allotment attached to the back of my house instead of having to lug all me tools half a mile up the road.