Today in the garden ... the rummager unmasked! 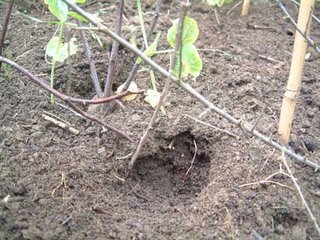 I went out for my morning inspection of the garden and discovered that my Alderman pea seedlings (above) had been rummaged overnight, as had my newly planted potatoes and a few leeks. The mulch of grass cuttings I put around my tomato plants a few days ago had been burrowed into and flung all over the path. Grrrr!

But this time there was forensic evidence! There in the soil around the pea seedlings were some claw marks, and in one place something resembling a footprint. It wasn't very clear, but enough to see that the phantom marauder has small clawed hands with a spread of about half an inch. Which immediately led me to conclude it was a hedgehog. It's the most common nocturnal digger in the UK with feet of that size, and it eats worms and grubs. It still doesn't explain how or why it got to the pots I'd put in high places, but it was by far the most likely.

And then I turned round and saw the culprit himself! A hedgehog waddling across the scrubby patch of lawn I laughingly call a wildflower meadow at the bottom of the garden. "That's odd," I thought. "They don't normally come out in the daytime." I had the camera in my hand so I managed to snap the evidence before he sauntered off into a pile of discarded potato haulms. 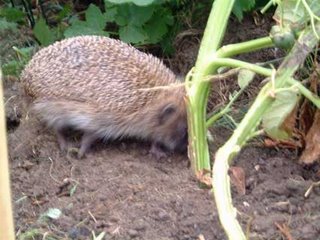 And another thing that was odd ... he showed no fear of me at all, and not even much awareness that I was there. Most hedgehogs leg it into the bushes when they encounter a human. Then I got a closer look at him and saw that he was blind. In fact he looks like a very elderly and decrepit hedgehog indeed and I fear his rummaging days are drawing towards their natural close. I stood very still for a bit so as not to startle him and he came right up to me, brushed against my legs and then walked over my foot!

One of my cats came out to see what was going on but she obviously knows that prodding hedgehogs is not a good idea so she just sat and looked at him. At first I thought he was on his last legs because he spent some time slumped under a butternut squash plant making wheezing noises, but then he got up and started scampering about ... found his way into next door's garden and then came back in the late afternoon and scampered around on the patio, trampling my chocolate cosmos in the process.

I'm calling him Dodgem because he charges around bouncing off things. He seems happy enough; he can't see where he's going so he just crashes through stuff. 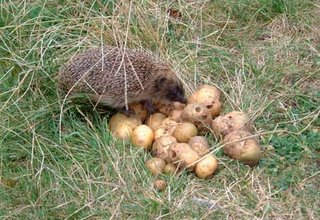 Out on a 24-hour rummaging spree. And I hoped you wouldn't get to see those horrible slug-tunnelled spuds. Dang.
Posted by Rebsie Fairholm at 10:47 pm

Now there is something we don't see in the United States... hedgehogs. We do have raccoons, who can take down a stand of corn in an hour, but no hedgehogs. I'd say "how cute", but I'm sure he isn't with the damage he is causing!

Hehe! Well, he is kinda cute isn't he? And at least hedgehogs don't eat plants, so the damage they cause is minimal compared to raccoons by the sound of it!

After reading about blister beetles on Farmgirl's blog I'm beginning to realise I should consider myself very lucky that the wildlife over here is so benign ...

A hedgehog...now, that was my (private) guess - so is there a prize?

I know, you can package him up and mail him to Alaska, with a partner of the opposite gender, and we can start something new here.

At least it would be more manageable than the grizzly bears I have rummaging in my garden....Libby D

PS: how do you tell the gender of a hedgehog, anyhow?

We do have some pests in the U.S., especially Japanese beetles, an unwelcome import. They defoliate so many different flowers, roses, and trees all through July.

Hi Libby ... grizzly bears?! Oh my goodness! I feel guilty that I ever complained about my measly hedgehog!

I confess I've no idea what gender Dodgem is, I just wanted to assign something rather than call him "it". I don't fancy picking him up to find out ...