Today in the garden ... wet fruit 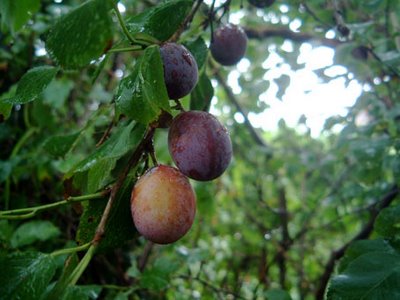 Up until the 1920s and 30s, the west side of Cheltenham was covered with orchards and lots of different fruit trees. As the town expanded almost all of it disappeared. Our house was built in the mid 1930s on land which had been growing damson trees (damsons are like small plums) and although most were lost a few of the original trees still survive along garden boundaries. I'm especially lucky to have two in my garden (although one is growing on the corner point of three gardens so it's hard to say who actually owns it). One has fairly large black fruits with a grey bloom and is slightly on the bitter and tastless side, to be honest. The other one (shown in the photo) has smaller, golden-reddy-purple fruits which taste exquisite. So exquisite I even crawled through a big heap of stinking soggy twigs to get at them and ended up with a spider in my hair. Ewww.

It's been a really good year for tree fruit. They don't seem bothered by drought, but then Cheltenham is a spa town and there's underground water pretty much everywhere in this area, so they've probably got their roots into the nearest aquifer. The damsons have been very abundant. I also have an old and decrepit pear tree which is fruiting like billio. I don't actually like pears as it happens, but I can certainly find willing recipients to palm them off onto. And the apple trees I planted earlier this year are looking fine and dandy. 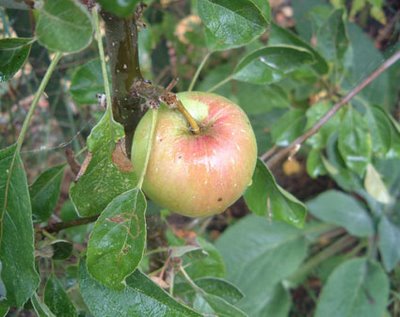 A Tewkesbury Baron apple, a local heritage variety I planted just a few months ago

I haven't seen Dodgem out on the prowl for the last couple of days so hopefully he's gone back to his regular nocturnal routine. It certainly looks like it, because I had a pot of holy basil ransacked overnight and its contents spread across the patio and in the cats' water bowl. But one thing I have discovered is where he hangs out during non-rummaging times. And I found it because I heard him snoring while I was tending some tomato plants at the bottom of the garden. When Shakespeare wrote his famous three witches scene and came up with the line "Thrice and once the hedge-pig whin'd" he was using some artistic licence, because the noise they make is more of a wheezy snuffly slurp. But then I guess "wheezy snuffly slurp" would have been harder to fit into an iambic tetrameter. Not to put too fine a point on it, hedgehogs sound like somebody with a very bad cold. And following the noise to its source, I found a narrow hedgehog-sized gap between the chainlink fence and a large log which forms the boundary of my bog-garden, and there was Dodgem curled up asleep with a few flies buzzing round him.

Things I've learned today: if you're cleaning out a vase with a long and very narrow neck it's NOT a good idea to turn the tap on full blast.

It's been perfect weather for the garden today because it chucked it down with rain all morning and then the sun came out. No matter how much effort you put into irrigation the garden always responds best to real rain. And now the sun will help the plants make the most of it. Rain followed by sun makes everything smell wonderful, and the water and light create some beautiful photo opportunities. 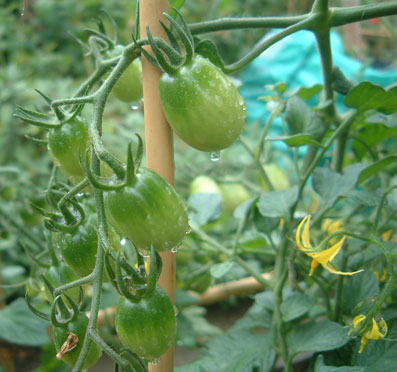 I don't have any red tomatoes yet, but the green ones give me plenty to look at. This is Pink Jester ... 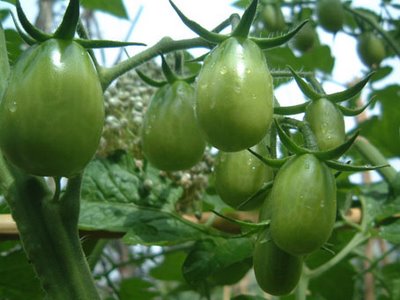 ... and this is the Russian heirloom Black Plum
Posted by Rebsie Fairholm at 9:52 pm

Fantastic photographs!
I think I will go out in the rain and take some!

Yes, if you can catch that short period of time when the sun comes out just after it's rained, before it all evaporates ...