Today in the garden ... Dodgem RIP 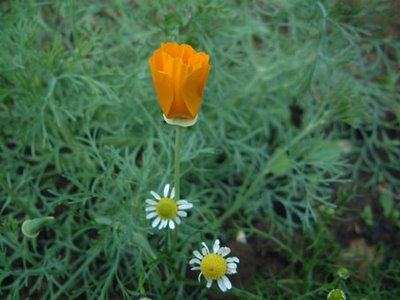 California poppy and wild chamomile growing in the potato patch

Well, I did say Dodgem looked like he was nearing the end of his rummaging. I found him under the Tewkesbury Baron apple tree this afternoon, and he seems to have died of natural causes. We buried him in a tumulus under the tree.

There are plenty more animals in the garden though. Including this big woolly one who does plenty of rummaging of her own. This is Chiana, our Norwegian Forest cat. She's very camera shy so I never get to photograph her face. 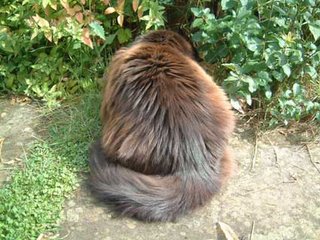 So far I've only tried Mrs Fortune's climbing bean in the form of green beans, i.e. cooking and eating the whole pods, and they're very succulent but I haven't found the flavour to be outstanding. Today I found that this variety really comes into its own when you leave the pods to swell a bit and then shell them out and cook the beans fresh. Shelling them is a bit laborious because the pods are still very fleshy and succulent at this stage, but it's worth it. I also found it hard to find any cooking instructions, because fresh shelled French beans are something you almost never get in the UK ... I guess it doesn't make an economical commercial crop so you don't find it in the shops. Darned shame too, because if these are anything to go by we're really missing out. Boiling the beans in unsalted water (salt hardens the skins) for 5 or 10 minutes seems to do the trick. Mrs Fortune's beans are greenish white and rounded like a haricot. Texture and flavour are wonderful. When fully mature they develop beautiful maroon splodges on the seed coat, but I think for eating they're best before they reach that stage. 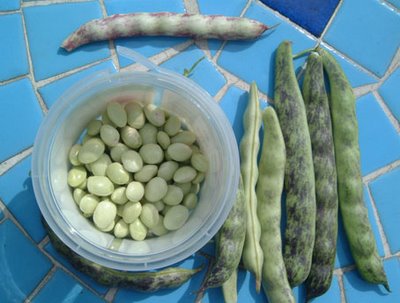 Mrs Fortune's climbing bean has a lovely texture and flavour when cooked without its pods. Notice the variation in the blue streaks on the pods because the blue only develops with exposure to sunlight. The pod at top left is reaching full maturity and is turning maroon and cream. I'm keeping that one for seed.

I also tried some shelled out Kew Blue beans cooked the same way, and they were possibly even more gorgeous ... the beans are slightly kidney shaped and start off white but turn a greyish blue after cooking, and they have a firmer and nuttier texture and flavour than Mrs F. But where Mrs Fortune's really has the advantage is in its mad yields, which far exceed Kew Blue's, so shelling is the obvious thing to do with it since you'd have a heck of a job getting through it all if you ate them as green beans. A preposterously abundant crop.

It's still raining on and off, and I'm starting to fear some of the tomatoes will not get a chance to ripen unless we get an improvement in the weather. It's not the rain that's a problem, it's the grey skies. Tomatoes need a certain level of light in order to photosynthesise; if the sky is overcast for any length of time they just don't grow. I had to move a couple of my American tomatoes because the bed I'd planted them in no longer gets enough sun now that the season is turning and it's getting lower in the sky, and they basically refused to grow any further. Unfortunately I'm completely out of growing space, sunny or otherwise, so I had to create a new bed for them out of the corner of the lawn, give it a frenzied digging over and enrich it with horse manure. It looks ridiculous, sliced out of an otherwise square lawn, but the plants are happy now.

One crop doing especially well this year is rainbow chard Bright Lights; last year the leaves were mangled by an assortment of slugs and caterpillars but this year they're pristine. I'm hoping this is a sign that the ecosystem is finding a balance now. The garden was managed with chemicals up until the time I got it (2004) so it's still in the process of adapting to organic. 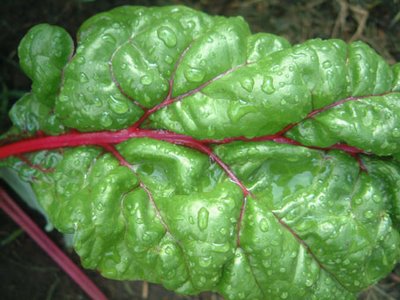 Posted by Rebsie Fairholm at 11:24 pm

Beautiful swiss chard. By the way, I learn something new everytime I visited your blog. I never knew what a tumulus was, now I do. I'll admit I had to look it up.

I'm afraid I feared for Dodgem when you mentioned the flies buzzing him the other day. As a country lad I know this usually indicates the end with hedghogs...the flies, well they just seem to know you see.

Thanks Carol. I'm still staring at the chard in disbelief.

Aaah, I didn't know that about hedgehogs, Greenmantle. But I guess it makes sense. Is it true of other animals too?

Your chard is gorgeous. I need to see if I can find some beans to shell, at the farmers' market.....

I love that swiss chard, all the different color stalks! I'm trying to get seed off mine from last summer, but the seed heads don't seem to be drying at all. I finally cut them off the plants this morning and hung them in my shed to dry. Hopefully there will be plantable seeds!
Chiana looks like our Tas, same coloration, the brownish black, and just as fluffy!