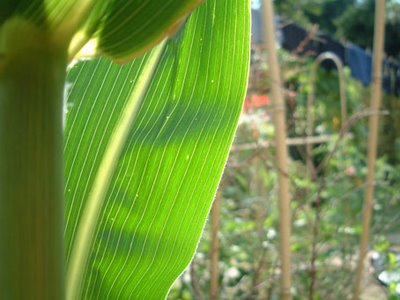 Swift F1 sweetcorn set against a background of laundry to symbolise the garden's status as a place of work and domesticity (oh all right, I didn't realise they were in the shot).

I planted out 47 leeks that my next door neighbour gave me. I already planted out 20 of them about a month ago and I still have about 9 left in the pot. That's right, all 76 of them were originally growing together in one pot. My neighbour got them from the old geezer across the road in exchange for lawn mowing favours, and passed them on to me because he says he and the wife don't really eat these oniony type things. He gave me half a marrow last week from the same source, because he said (gesturing towards the kitchen) "I can't see 'er cookin' it." I don't like marrows, but I know better than to turn down anything that came from the old geezer across the road. The old geezer's garden is the stuff of legend. I've never seen it, but from my bedroom window I can see the monstrous wigwams of pink and red flowered runner beans poking up over the back of his garage. I don't know how he does it; he's in his eighties, almost blind, and ambles along very slowly with a stick. But he does all his own gardening, and his front garden is full of immaculate tubs of bedding plants which look like they're straight off a stand at a flower show. And my next door neighbour has told me all about the back garden, which he says is "all laid out like allotments". Every year the old geezer puts four marrow seeds on the top of his compost heap, and the plants trail down the garden to a distance of 25-30ft. 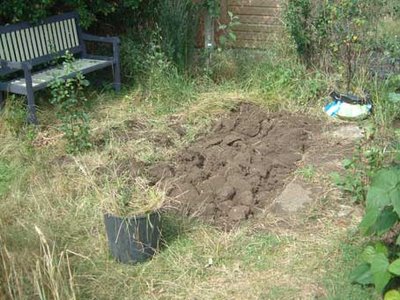 New veg plot emerging from crappy lawn. It doesn't look great at the moment, but it's a start.

Only trouble is, I have no spare growing space. To accommodate the leeks, plus a few other homeless bits and bobs like winter cauliflower and a couple of chitted potatoes I've had on the windowsill for ages, I have been digging another new veg plot from a scrubby and largely redundant patch of lawn near the bottom of the garden. When I took over the garden in 2004 almost the whole lot was laid to lawn, and as I'm working single-handedly on restoring it to full cultivation it has to be done in small chunks as and when I have the energy. 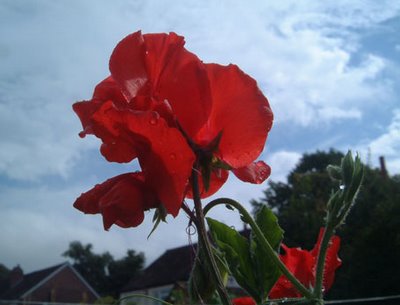 Guess what I went and bloody did? I went out to collect some of these nice red sweet peas to bring into the house and I managed to cut one of the stems I'd hand-pollinated in an experimental cross with an old-fashioned Cupani sweet pea. Duh! I only realised it when I saw one of my little purple marker tags among the flowers in the vase. What an eejit! It was a successful pollination too, full of lovely tiny seeds. So I had to go out and do some new pollinations today with what's left of the Cupani pollen. 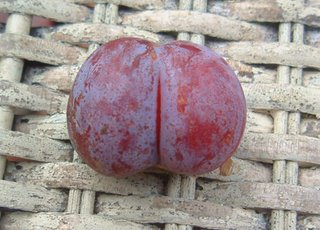 I don't often post photos of prurient produce on my blog (I'm sure there are plenty of other websites specialising in it) but this double damson was too good to miss. I haven't been able to identify this damson variety yet, which comes from a pre-1930s tree and tastes like a plum. I reckon it's an obscure old Gloucestershire variety called Arrrse!
Posted by Rebsie Fairholm at 12:58 pm

That red pea photo is a beauty!

Aaarse! - I don't believe it- you're taking the p!??? How many other rudies do you have in the garden!

Heh heh! Yeah, I confess there isn't really a variety called that, but there ought to be ... given that there are old Gloucestershire apples called Bastard Underleaf and Hen's Turds.

I don't have any other lewd veg in the garden at the moment, but if I see any I'll be sure to post it! :)

I still can't post comments on your blog, John, they just disappear as soon as I click the button. I'll try it in a different browser soon and see if that helps. In the mean time, with regard to your Golden Sweet tomatoes, I think it's well worth saving seed from them. Tomatoes are such strong inbreeders ... they're genetically more stable than most plants and will most likely come true from seed, or at least some of them will. Even if it is an F1 hybrid you'll probably find that some of the offspring will have the right characteristics, and you can select the ones you like for subsequent seed saving. You've got nothing to lose by trying it, anyway.

Rebsie,
Thanks for that - didn't know that you were having trouble with posting comments to my blog - you've got through in the past. Let me know if the problem continues and I'll take it up with Typepad.

I'll save some from Golden Sweet and see how they do

This is a brilliant blog! I'm very happy with the comments!..
ohio mulch