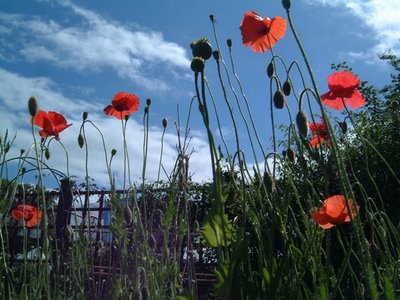 Somme poppies: collected from a French trench 10 years ago and seen here growing with wheat

As today is the 90th anniversary of the Battle of the Somme, an event I've delved into all too deeply in the course of my researches a few years ago, I'm posting up some pictures of the poppies which are growing in the garden at the moment. Starting with a photo of the French landrace (wild stock) I collected on the Somme, from the ditches of the British front line in the village of Serre, which was part of the Somme battlefield. I've already blogged the story of how I found them. I've had a 'thing' about poppies ever since.

And having looked through so many images of the First World War, it was quite weird today how the TV pictures of defeated England footballers with their slumped and heavy limbs looked uncannily like the photos of the soldiers who came off the fields of the Somme. You could read quite a few levels of symbolism into England's misfortunes and mistakes.

All these pictures have been taken in the last couple of days. 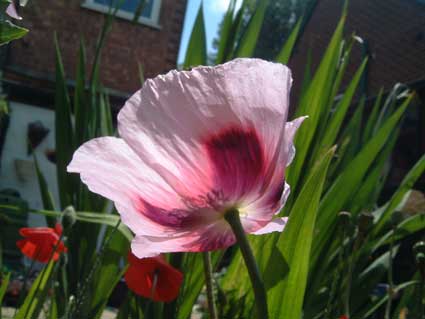 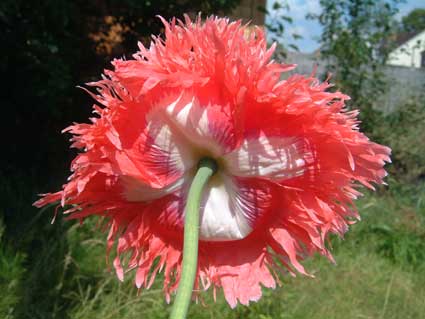 This frilly-headed opium poppy with a white base appeared out of nowhere: it's a lacinatum-type and not quite like any of the other poppies in the garden. I might save some seeds from it to plant next year but I may not get another one like it because poppies are promiscuous outbreeders and it's likely to have cross-pollinated with all the slightly less interesting flowers surrounding it. Ha. 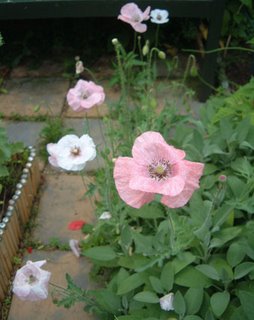 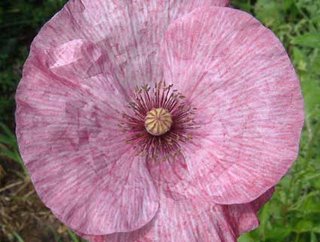 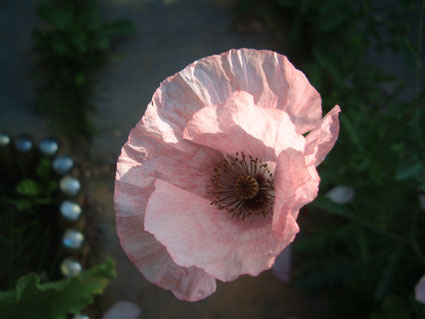 These three pictures are all of self-seeded field poppies (Papaver rhoeas) from the variety Mother of Pearl. The flowers often have rays of colour running through them that look like fine stripes.
Posted by Rebsie Fairholm at 11:22 pm

Hello! I finally made it over to your blog--linked here from the nice comments you've left on mine. Thanks for letting me know how much you like Seeds of Italy. I've been meaning to write a bit about that since you left the comment. Where does the time go?

Wow--all of your photos are stunning. These poppies are absolutely gorgeous. I used to grow them and then somehow simply forgot about them--and quite a few other flowers--when my garden shrunk in size. Looking at all of yours almost makes me feel as if they're right in my garden. Love the photo looking down from your music studio, too. I wouldn't get anything done if that were my patio! : )

Lovely, lovely blog. Thanks for sharing everything. Your bamboo structure is fabulous--I've never seen those nice arched pieces here. I look forward to reading more of your posts. And yes, it is interesting to see how different (and sometimes similar) things are in our gardens that are so far apart. So do you want me to send you some turtles? : )

Thanks so much, Farmgirl, for your lovely comment! When I started doing the blog a few months ago I kept thinking "does anybody really want to know any of this?" So being told that my stuff is appreciated means the world to me.

I'm a big fan of your blog too ... I admire the energy you have in keeping it going so regularly, and you're a very entertaining writer.

I'll swap you some poppy seeds for a turtle! :)

Mother of Pearl poppies.. those look really pretty, delicate!
I grew some of those a few years ago, they were left behind at my old house. I loved the unusual colors.
I'll have to get me a packet of seed for next year, I had forgotton how lovely these are!

I was wondering if you can give me some advice on how and when to cultivate the seeds from my Poppies? They bloomed last week, and some have already lost their petals, but the purple black inside pods are still there, are those the seeds?? I'd love to share them with some friends.

Hello Jeanne. The pod that's left behind after the petals drop is the seed capsule. Inside it are thousands of tiny round seeds, usually black or grey but sometimes white. What you need to do now is leave them for a few weeks, as they won't yet be mature and the seeds won't be viable yet. Leave them until the capsule goes brown and dries out. When they're fully mature the capsules will develop small holes around the top like a pepper pot ... THEN they're ready! Simply snip the stems and turn the capsule upside down into a paper bag, and gently shake the seeds out. They are abundant so you'll have plenty to share with your friends. Good luck!