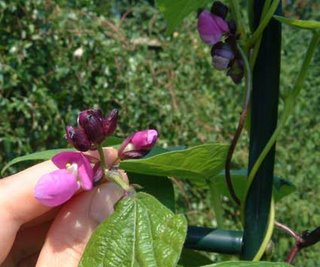 Just as all the other broad beans are being harvested, the late-sown Martock broad beans have come into flower. This is the really antique variety which is reputed to have been around since the 13th century. I'm only growing four plants, and they're all standing very upright and not branching at all. But as is often the case with these very old varieties with a well shuffled genepool, they all have slightly different flowers. They are all white with black blotches and purply-mauve at the base, but there's variability in how much purple they have and whether it's on the whole flower or upper parts only. Two have strong purple veining running through the petals while the other two are just white.

At this point I'd like to state my view that this variability is a very good thing. We've been conditioned into thinking that we want plants to come out consistently identical and to do exactly what it says on the tin. Not surprising really, when uniformity is one of the three traits a vegetable variety is required to have before it can be included on the National List, and the seed companies want you to choose uniform varieties because they tend to be F1 hybrids and they can charge more for those. From an ecological point of view though, the variability between plants is a sign of a healthy genepool with lots of sub-lines being preserved and reshuffled, which is important for long term biodiversity. I also think, personally, that the element of surprise ... not knowing exactly what the plant is going to come up with ... is one of the great joys of gardening. 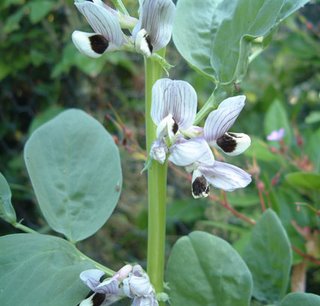 Flowers on Martock broad bean. This one has lovely purple-black veining in the petals.

Kew Blue is claiming the distinction of being the most gorgeous plant in the bean plot, which is quite an achievement when I'm also growing Trionfo Violetto, which would normally win hands down. It's not as refined as Trionfo ... it has slightly gnarled and asymmetrical leaves which give it a kind of lopsided scruffiness, but its colour is so deep and vibrant it almost glows. It looks shinier, healthier and more vigorous than the other beans. The leaves are the richest green and the stems are a velvety purple. The stems are chunky. The leaf stalks fade gracefully from purple to green but some of the smaller petioles are almost black. It's a very striking looking plant. And it hasn't even flowered yet. I still have that pleasure to come.

Not to be outdone by a better looking rival, Trionfo Violetto produced the first pod of the season. I found it lurking in the undergrowth at the bottom of the plants. Yup, there's just the one. 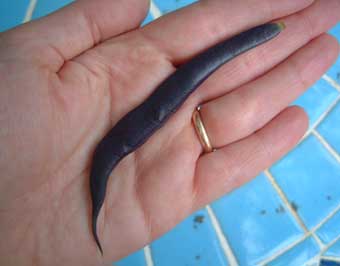 Not really enough for a meal, but it's the thought that counts.

Of course it's possible that the superiority of the Kew Blue is down to the soil it's growing in ... I think it may have had more manure dug into it than the other bean plots, and manure is the thing that makes the biggest difference to plant performance, in my experience. I'll only find out for sure by growing it for a few more seasons. But for a variety that got off to an unimpressively sluggish start it's now looking very dapper. 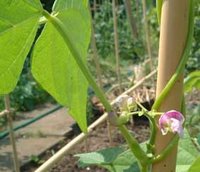 Mrs Fortune's, it has to be said, is not a looker, poor dear. The leaves are very tidy and symmetrical, but they sag at night and have a rather anaemic pale green colour. The first flower buds are now forming and they're a boring green with a half-arsed splosh of mauve. Not one for the ornamental borders. But no doubt it has other qualities, and it's certainly growing well. No bother at all from pests.

Ha, things change very fast in the garden. In the time it's taken me to write up this blog post, a couple of the flowers have opened and they do have a nice dark pink colour on the inside.

It seems that the summer solstice is the cue for all the beans to flower, because my runner beans have also started to produce buds. There's a lot of red-colouring in the heritage variety Black Magic, including the leaf veins, which look lovely against the light. 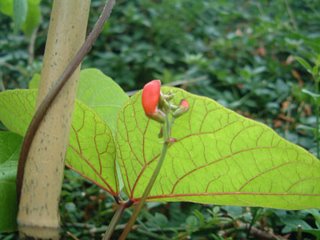 Incidentally my neighbour had a crop failure with his runners (the damp weather in late May seems to have rotted the seeds) so he bought some plants that were on offer down at B&Q, and they're a variety called White Emergo which has white flowers and seeds. What will happen if that cross-pollinates with my Black Magic is anybody's guess. Skewbald beans!
Posted by Rebsie Fairholm at 4:04 pm