Yellow Sugarsnap Project: all podded out 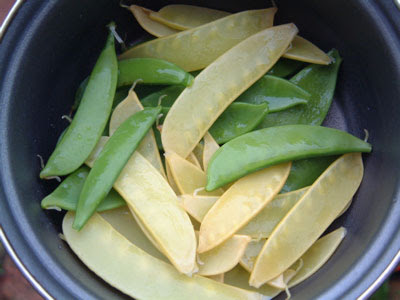 Now that the yellow sugarsnap project F2 generation has reached full maturity I'm having to decide which lines I want to keep seed from. 63 plants to choose from, each one unique. I could just keep seed from all of them, but that's a lot of work and cataloguing for seeds I will probably never use. So I'm just keeping the most interesting looking phenotypes. The yellow sugarsnap, obviously, and the ones with pink and white flowers. And a few others which had really good flavours or other interesting traits.

I have to be careful though, because they will all have hidden recessives which might turn out to be useful in future generations. When I choose not to save seed from an F2 plant, its unique genotype is gone forever. It's a bit daunting to make these choices because it feels like I'm playing God, or playing Darwin at least. But it's gotta be done, and the inevitable manifestation of evolution is that the weakest get eaten.

Eating F2 hybrid vegetables is a curious experience. F2 plants show a lot of diversity, and that includes flavour, texture and cooking qualities. They look weird on the plate: big ones and small ones, greyish or bright green or dark green, compactly wrinkled or smooth and fat. If you're used to homogenised supermarket peas it's really difficult to imagine what it's like to have a mouthful of diverse peas. It's a sensory overload, like your brain doesn't know which sensation to register first. 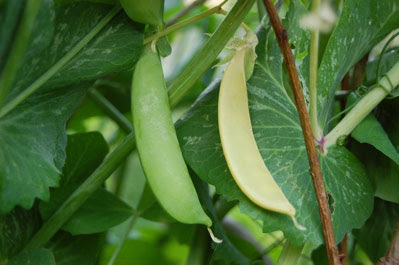 Green and yellow sugarsnaps side by side 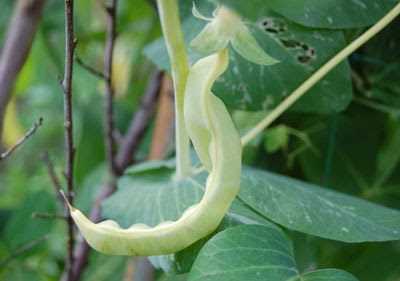 I did taste tests on as many of the plants as possible and collected the data. The first plant to flower, whose photo I triumphantly posted a few weeks ago, was beautiful to look at but when its peas matured they were hard, mealy, starchy and bitter. By contrast there were some sugarsnaps with ambrosial sweetness.

There was a lot of diversity in the pods too. As the top photo shows, I picked and ate a lot of the green mangetouts, along with some green sugarsnaps and yellow mangetouts, as they were surplus to requirements. Most of them were pleasantly enjoyable, except for one of the yellow mangetouts which turned out to have an inedible inner lining of fibre. So inedible, in fact, it required to be spat out on the side of the plate. I hadn't been expecting that. Diversity is one thing, but both the original parent varieties were mangetout types, so how does an inedible-podded variant suddenly show up in the cross? Well it's a longish story.

Normal peas have a fibrous membrane on the inner surface of the pod, and it is not a nice thing to chew on. What makes a mangetout a mangetout is that they don't have this membrane. Or if they do, it's thin and soft enough to be edible while the pod is young. The mangetout trait is recessive, and just to make it complicated it's controlled by two different genes which function independently.

On an individual basis, gene p on chromosome 6 and gene v on chromosome 4 both seem to fulfil pretty much the same function: reducing the fibre content, to produce mangetouts which are edible-podded when young but may get fibrous later. When you get both these genes together they combine forces in a harmonious way, and fully edible fibreless pods result.

IF one parent is ppVV and the other PPvv, crossing those two varieties will produce offspring with fibrous inedible pods. That's because they create F1 offspring which is PpVv. The two recessive mangetout genes are still there, but overshadowed by two dominant non-mangetout genes. Only in the next (F2) generation can the mangetout trait reassert itself, and only as part of a diverse mixture of mangetouts, semi-mangetouts and inedible fibrous pods.

To be honest I didn't think to check whether my F1 plants were mangetouts or not. I saved all of them for seed and didn't notice what sort of pods they had. In the F2 generation though, I have a large number of inedible pods. Especially among the sugarsnap types. If I'd done my homework properly I should have anticipated this, but I didn't. So I have a lot of sweet juicy pods and sweet juicy peas separated by a layer of chewy gristle.

And the bad news ... this includes my coveted and one and only yellow sugarsnap. It has a gristly fibre layer. Can I just say: arse!

All is not lost though. Depending on its exact genotype, I may be able to get some pure yellow sugarsnaps from its offspring. If the recessive mangetout genes are still in there, they will express themselves next time round. I sowed the seeds this morning and will have to wait and see. If not though, I will have to grow out another crop of F2 seeds in the hope of finding another yellow sugarsnap with a more promising genotype.

Ah well, it's all part of the fun. I can't be getting instant exciting results like the red-podder on every project. 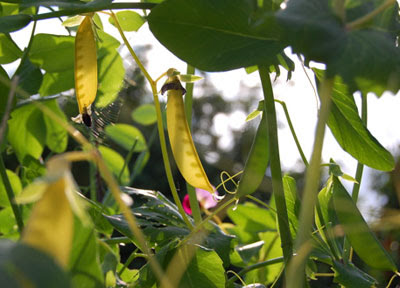 Beautiful sunlit colours and a mix of yellow and green pods

Of the six plants which had beautiful pinky-white flowers, five are gristly sugarsnaps but one has perfect edible pods. I will save and sow seeds from all of them, for the reasons outlined above ... some will most likely produce fibre-free offspring. Meanwhile they're showing some beautiful colours as the seeds dry out, as they've all inherited a gene from Golden Sweet which produces dark purple speckles on the seed coat.
Posted by Rebsie Fairholm at 9:34 pm

Exciting though eh? And at least you can eat MOST of the rejects.

So pretty! I love your sense of lighting and composition...I want purple peas tooo!