Tomato flower diversity (there is some, honest) 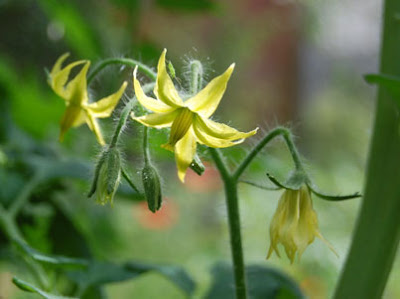 Black Prince is a Siberian heirloom variety given to me by Patrick of Bifurcated Carrots and has good old-fashioned classic tomato flowers, on curiously hairy stalks. The fruits should turn out to be a deep dark dusky red.

Was anyone else as disgusted as I was by the debate about welfare standards in chicken farming on Newsnight last night? Hugh Fearnley-Whittingstall was referring to chickens as "birds" while the representative from the poultry industry kept calling them an "assured product". That in itself sums up what's fundamentally wrong with industrial farming.

I'm sure there aren't many people who grow tomatoes for the beauty of their flowers ... they only come in shades of yellow and there are much more aesthetic florescences to be found on other vegetables. But in their gawky yellow cone-ness there is a definite charm. I also love the way the flowering branches unfurl in a spiral pattern.

Another reason tomato flowers often go unnoticed is that they face downwards, and don't raise their faces to the sun as so many plants do. There's a good reason for that. It's because they self-pollinate, and rely on gravity rather than bees to get the pollen in the right place. The cone part of the flower is actually a set of anthers (pollen sacs) all fused together, and the receptive female part is on the end of a little stalk hidden inside the cone. Pollen is shed on the inside and drops down into the tip of the cone, where the stigma gets smothered in it. A bit like dipping a stick of liquorice into a Sherbert Fountain, if you remember those.

Tomatoes are quite efficient at self-pollinating but if you have problems with the fruit not setting the solution is to give the plant or the flower truss a gentle wiggle. They don't need bees, and generally bees aren't attracted to them.

Another tomato Patrick gave me is Yellow Taxi which I believe is an American heirloom. I rather like its flowers, they have a rounded cone so they're kind of chunky and the petals are pleasantly ruffled. The fruits, when they appear, will be bright yellow globes. 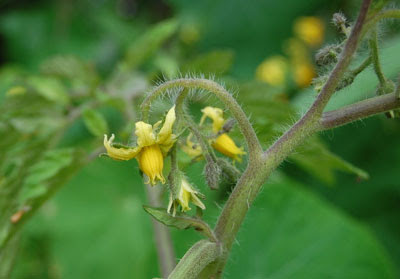 The most extravagant-flowered tomato I grow is undoubtedly Copia. An American variety, I ordered it from a supplier in the US in 2006 but planted it too late to get any fruits off it, and then in 2007 I lost my entire tomato crop to blight. So I haven't yet had the pleasure to see or taste its fruits (which are supposed to be a spectacular marbled red and yellow bicolour with a pink inner flush). But I have enjoyed its flowers instead.

The flowers are very large and double, so they have a lot of petals, and the anthers are too numerous to form themselves into a cone. The female stigma is also "double", so there's a right old cluster of flower parts all crammed together in sun-like glory. It's important to be aware though that when the stigma is as exposed as this, the risk of cross-pollination with other tomatoes is high. Normally tomatoes don't cross much, but that's because the stigma is hidden away. Here, as you can see (the green blobby bits in the middle), it's waving itself in full exposure.

Although I had to go to some lengths to get hold of my Copia seeds, I see a few other European bloggers are growing it so it may be more "available" than I thought. 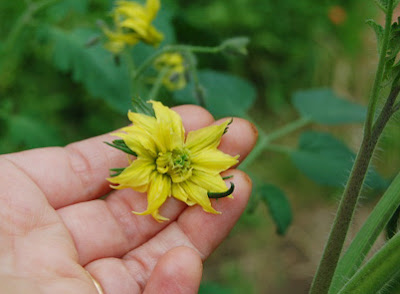 By way of contrast, these are the tiny tiddly flowers of Green Tiger, a fraction of the size of Copia and sporting a dark flush on the petals. This variety is a bit of an experiment, because the seeds are not available for gardeners to buy ... I saved them from a punnet of fruit I bought in Marks & Spencer's and they claim the variety is exclusive to them. The original fruits were very distinctive, deep burgundy red inside with a dark green stripey skin, and tasted pretty good for a commercially grown variety. I've no idea whether or not it's an F1 hybrid, so it may not come true from seed. But the plants I have do look very uniform so far, so here's hoping. 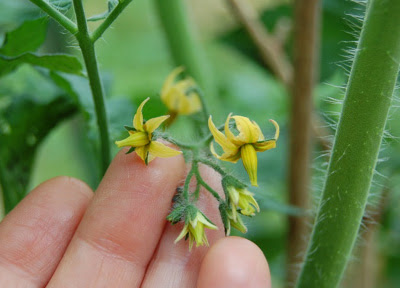 Everyone has heard of Brandywine, the classic "beefsteak" tomato with an acclaimed flavour. It has a huge number of variants and sub-strains. I got Apricot Brandywine in a seed swap (thanks Pam). It's a potato-leaved variety and the flowers, like the fruits, are pretty big. It's another one with an exposed stigma, so the risk of cross-pollination is high. 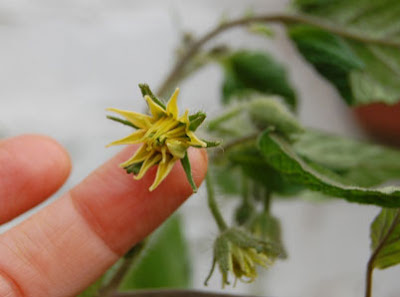 At the other end of the size and shape spectrum is the delightfully named Banana Legs. It's called that because the fruits are banana coloured and shaped a bit like a leg. Obviously. This unique variety was selected by John Swenson from a tomato seed mixture called Mixed Long Toms developed in the 1980s by Tom Wagner of Tater Mater Seeds. Tom is a truly great tomato breeder but I feel a bit sorry for him because many of his creations are now being sold without him even getting any credit for them let alone any cash. Green Zebra is one of his, as is the Green Sausage recently offered in the UK by T&M. He still does his breeding work though and also runs a fascinating forum for people interested in tomato and potato breeding. Banana Legs is fairly easy to find in the US, but less so in Europe ... I got mine from Association Kokopelli. 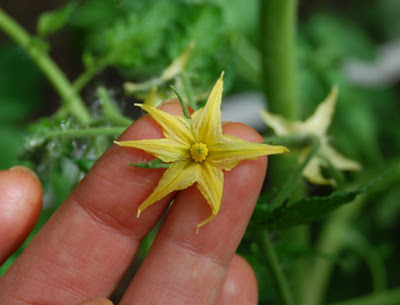 Going even further into the realms of strange coloured tomatoes, I'm trying a white-fruited variety for the first time this year. When I say white, it's probably more of a pale yellow. I'm not sure white tomatoes taste that great ... most catalogue descriptions tend to say "mild flavour", which is generally a euphemism for "bland". But worth a try out of curiosity. I'm growing Douce de Picardie, a rare French heirloom from Association Kokopelli. The plants are monstrously large and a bit weird-smelling. Flowers are a pale whitish yellow. The photo shows a flower which has just shed its petals and has a tiny fruit in the middle. Notice the long thin sepals (the green sticky-outy bits). 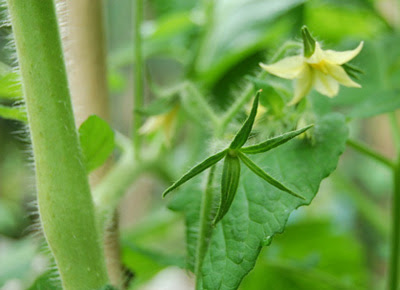 Also from Association Kokopelli (I buy most of my tomatoes from them because their range is phenomenal) we have the bright-orange fruited Caro Rich. I suspect it's related to the British heirloom Tangella which it greatly resembles, but it's specifically been bred for its nutritional value ... it has around 10 times as much beta-carotene as most other tomatoes. The sepals of the flowers have a tendency to fuse together, so it has three wide sepals instead of the usual five or seven thin ones. 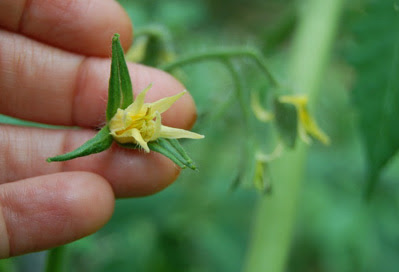 Another one I imported from America because I don't know of anywhere you can get it over here, although it supposedly originates in Eastern Europe, a cherry-sized yellow and red marbled tomato called Isis Candy. The flower in the picture is very decorative, but I should point out it's a slight abberation. The normal flower type is more like the one in the lower right of the picture. Tomatoes often produce these spontaneous double or composite flowers. 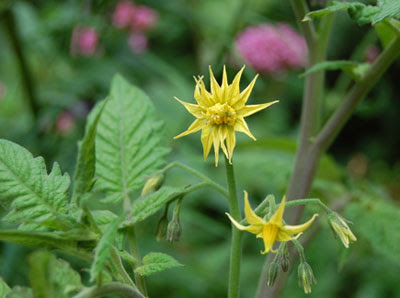 And last but not least, the lovely Peacevine Cherry with its broad-petalled star-shaped flowers. This variety is an open-pollinated version of the popular F1 hybrid variety Sweet 100, with the additional advantage of having a very high vitamin C content. It was bred by Alan Kapuler, who has for many years been de-hybridising commercial hybrids to bring them into the public domain. I grew this one last year and it was one of only two varieties which resisted the blight long enough to produce a few fruits (the other being a San Marzano from Franchi). Peacevine Cherry is available from Association Kokopelli. 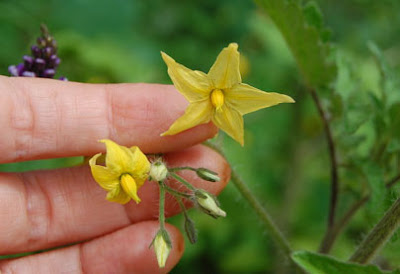 I've been noticing the same thing Rebsie, as it's the first year I've grown Brandywine, Black Krim, Black Sea Man and an open pollinated Bulgarian tom from Phreddy, all of which have the massive, chunky flowers.

I've got one Green Tiger in the greenhouse border and a couple in pots outdoors - the green fruits are definitely displaying the disinctive stripes from the "mother" fruits, so it looks promising and as you say the plants themselves are fairly uniform. I'll try to sort out pictures soon.

I was afraid it was just me getting a lot of composite flowers - I have taken to removing them because I think the resulting fruit doesn't really do that well, not sure if this is right though?

Apart from having a few setting problems this year, I'm also perplexed by the outbreak of flowering trusses that go on to develop more leaves and a full stem at the end. Broad Ripple Yellow Currant is the worst perpetrator of this so far..I still haven't worked out if it's my fault or not.

Thanks very much for this post - as for so many of your others, I find the photos particularly educational as well as beautiful.

What you are saying about tomatoes is really wonderful and the photos are beautiful. Could you possibly tell me what to do with this moneymaker I have here by my window - it's indoors, I don't have a garden; it's flourishing but produces no fruit. All the flowers seem to be dead. Should I tear of the dead flowers or prune it - it's getting taller all the time?

Large number of people focus on flowers information like these.