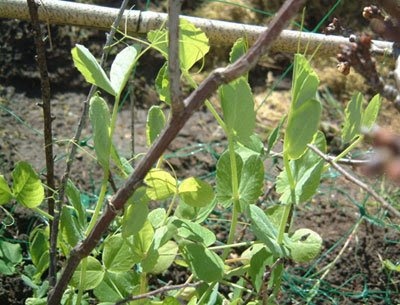 Jeremy said the eyes of the world would be on my yellow sugarsnap seedlings. Well, here they are Jeremy, I hope you like them (and the rest of the world does too).

The F2 plants are all slightly different but the differences are subtle at the moment. Purple leaf axil splodges are now showing up on a lot of plants as expected, although it's been slow to develop. The splodges indicate the genotype A_D_ and its assorted variants. A is the gene for anthocyanin production and D is the gene for the purple splodge. They are both dominant. The size, shape and intensity of the splodge varies from plant to plant though, so there are probably other genes at work too. Some plants have a cream band inside the purple one, some don't, others just have a faint trace of it.

This one (below) has no purple splodge in the leaf axil and no other purple or red marking so is presumably the recessive genotype aa. Whether it has D_ or dd I've no idea because D can't express itself in the absence of A. Ah, the joy of genes! 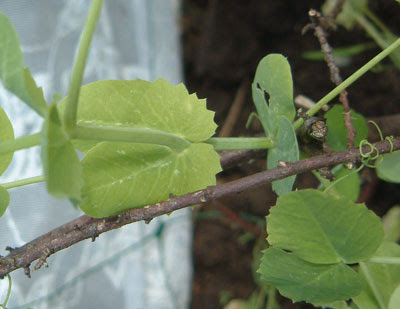 Another thing I've noticed. The dwarf plants have darker, grey-green leaves compared to most (though not all) of the tall plants, which are more yellowy-green. I have no idea yet whether this is genetic or caused by something in the environment, or an interaction of the two. The F2s have separated into dwarf and tall types in a beautiful Mendelian ratio despite the small sample size, and I planted all the dwarfs along the front edge of the frame so they don't get swamped. It may be that they're getting more sunlight, or it may be that their short stature concentrates the chlorophyll in a smaller area and makes them go darker.

If it is genetic, why would there be a correlation between short height and darker leaf colour? One possible explanation is gene linkage. Genes are arranged in long sequences on chromosomes, which break up and rearrange whenever a seed is produced, to form a new genome for that individual seed. Peas have seven chromosomes. If the gene for dwarf height is on one chromosome and the gene for darker leaves is on another, those genes will be independent of each other and will usually recombine freely in the offspring. But if the two genes are close together on the same chromosome, it's much less likely that they can be inherited separately. The closer they are, the more they will stick together. In addition to this, it's very common for genes to interact with each other and even for a single gene to have more than one function (pleiotropy is the technical name for it). Any of these factors could be involved.

Another possible explanation, of course, is coincidence. Just because all my dwarf peas have darker leaves, it doesn't necessarily mean there's a reason for it. As I said, it's a small sample size and I can't draw too many conclusions from it at this stage. 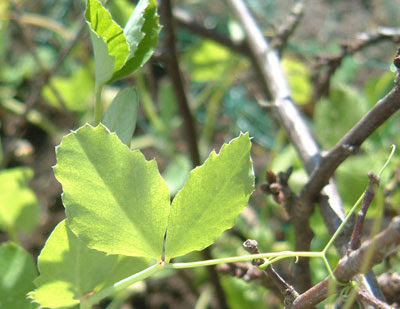 Almost all the F2 plants have got serrated leaf edges, but again there's variability in how strong it is. Some have subtle little points and spikes along the leaf margins while others are boldly zigzagged and look like someone's cut round them with pinking shears. One of the parent varieties, Sugar Ann, has boldly serrated leaf margins while the other, Golden Sweet, shows some variability. Most Golden Sweet plants have smoothly rounded leaf margins but serration does sometimes show up too. I assume there's a dominant gene involved here, which is either not fully penetrant in Golden Sweet or is interacting with other genes. My other breeding project involving Golden Sweet hybrids is showing the same thing, a strong dominance of serrated edges.

Everything I've written here is just idle speculation, I must emphasise. I no more understand the genetic make-up of these plants than I know what colour knickers the Queen is wearing. It's all down to observation and guesswork. I will probably have to grow another couple of generations of plants before I can draw any firm conclusions.
Posted by Rebsie Fairholm at 1:18 pm