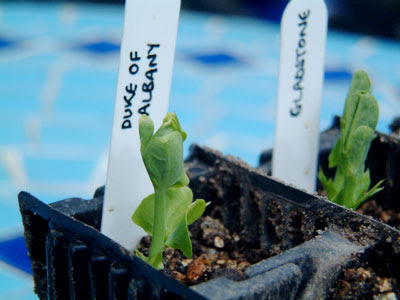 This year's acquisitions from the Heritage Seed Library

Honestly, I've got so many interesting peas on the go at the moment I'm really struggling to catch up with writing about them. I still have to do a post about my original Purple Pea Project, but in the mean time here's a brief update on the ones I've already blogged about.

I'm quite excited by Sugar Magnolia. It looks so different from anything else I've ever grown, and its height is already apparent in the way it's towered up above all the other seedlings in the tray. The stems are a lovely deep pink and the tendrils are mad - see below. I assume Alan Kapuler named it after a song (by the Grateful Dead). I'm trying to come up with a title for my next album and wondered about naming it after a vegetable.

There's a carrot named after Hendrix's Purple Haze but I'm not sure carrots were the plant substance Jimi had in mind when he wrote the song. Though I suppose it looks carrot-shaped when it's rolled up.

Graham, who very kindly sent me the pea seeds, has sent me some more seeds of both Sugar Magnolia and Opal Creek, along with a third Kapuler pea Spring Blush. I think Spring Blush may have been a sideline which sprang up from the breeding work on Sugar Magnolia. It has the same hypertendrils, apparently, and similar height ... but instead of purple pods it has green pods with a purple stripe. Another great curiosity to look forward to, thanks Graham! If all goes well I will be able to share seeds of these varieties next year. 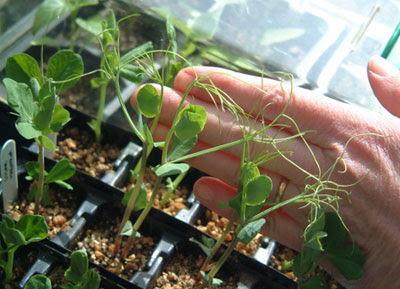 Many of my peas are now planted out in the garden and coping very well with the unseasonably chilly weather. At least the snails are not as big a problem as they usually are ... the very dry spring and the drawn-out cold have inhibited their activities considerably, so their numbers are pretty low at the moment. What I am having problems with though is keel slugs. They're those very small ones, often pale or pinky coloured, that live in the soil and come out at night to wreak unspeakable havoc among seedlings. They are far more destructive than those big ugly slithery jobbies you see on the garden path in the wet.

Oregon Trail has been the most severely damaged by the slugs and is a great example of why I generally avoid growing dwarf peas. Some of the plants are completely skeletonised, and none of them are looking good. The plants are so short the apical tip doesn't have a hope in hell of growing out of the slugs' reach. It's like a fast-food restaurant for gastropods.

Carouby de Mausanne is also being savaged, but as it's a tall pea I have every hope it will thrive. The apical tips are already well above ground level so the slugs are mostly just shredding the lower leaves.

I still have lots of F1 seeds from last year's hand-pollinations which need sowing and growing, and I'm also planning out what new crosses I can make this year. I was very impressed with Taiwan Sugar, a rare pale-pink-flowered pea kindly sent to me by Patrick: it's a mangetout (snow) type with a wonderful flavour and no string. But it's a very short dwarf variety and I've already explained what happens to dwarf peas in my slug-addled garden. So I'm wondering what would happen if I crossed it with a good tall mangetout, such as the voluptuous (white) flowered and gorgeous flavoured French heirloom Corne de Belier. A tall mangetout with pale shell-pink flowers and delicious sweet flavour would be a lovely thing to have ...
Posted by Rebsie Fairholm at 11:25 pm

Interesting that you, in the northern hemisphere and I, in the southern,are both sowing peas now. Your summers are probably not dis-similar to our winters and peas must not be daylength dependent.This year I am only growing my favourites, after years of experimenting - they are the plain old green sugarsnaps.Plus some purple sugarsnaps a friend gave me...its hard to resist variety in the garden.

Your Holy Grail of a sweet flavoured mangetout with shell pink flowers would be a winner! I know you can't sell them, but perhaps a few with each copy of your CD might spread the word even further. Just a thought from a folk-loving veg grower!