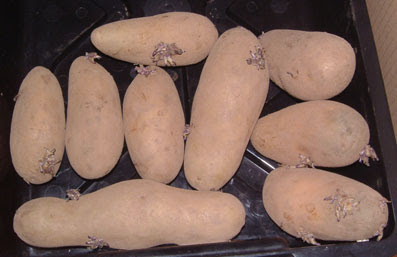 Seed tubers of Mayan Gold. Its shape tends to be more elongated than most potatoes. I can see a "lewd vegetables" post coming up later in the year when I harvest this lot ...

Oh gawd, I've got waaaaaaay too many potatoes this year. And just as I was chiding myself for overstocking to such a ridiculous extent I somehow managed to buy some more.

Well, I couldn't help it. I was in Dundry Nurseries outside Cheltenham (which as you may recall is Gloucestershire's mega spud emporium) just to buy some local eggs and a packet of pepper seeds (red bull's horn from Franchi, if you want to know) when I saw they had some Mayan Gold seed potatoes in stock. Last time I went it was on their list but they were still waiting for the stock to be delivered. I'm curious about this newly released spud and have been quite keen to road test it. It's a bit more expensive than other potato varieties but Dundry's price is lower than Thompson & Morgan's and they let you buy smaller quantities (I got 12). I don't know how special it really is, because when I search on the internet I find the majority of "information" about it is tainted with marketing bollux and I'm afraid I'm terribly cynical about celebrity chefs.

From what I can gather Mayan Gold was bred by the Scottish Crop Research Institute using an accession of Solanum phureja, a wild potato species found in Peru, as opposed to the usual Solanum tuberosum. The marketing claims it's an ancient variety, but I notice they've slapped Plant Breeders Rights on it, so presumably it's not that ancient. But anyway, a bit more genetic diversity in European spuds has got to be a good thing. Mayan Gold has elongated tubers with yellow flesh and sometimes a purple splodge on its rear end, although when you buy it as seed tubers it does of course just look brown and muddy. It's alleged to be high in carotene, which would account for its yellowy colour, but reading through the marketese it's not clear whether it contains beta-carotene (provitamin A) or one of the many other less nutritionally useful carotenes.

Unable to contain my curiosity, I cooked and ate one of the tubers. Now, it wasn't exactly a prime tuber nor a fresh one, so it wouldn't be fair to judge it on this one sample, but I have to say the taste was bland and the texture extremely dry and floury - the exact opposite of the advertised buttery texture and gourmet flavour. Really nothing special at all, just like an ordinary mediocre-flavoured spud. However, I'll reserve judgement until I've grown it myself and eaten it fresh ... it could be very different. Potatoes (and some other root vegetables) are a bit funny like that, they can vary enormously in different growing conditions and in different years, and will change even further during storage. I've tasted shop-bought Salad Blue potatoes which had all the charm of stewed sawdust, whereas the same stock grown in my garden had an outstanding flavour. Conversely, my home-grown crops of Marfona have never matched up to the exquisite flavour I've so often found in the mass-produced commercial packs in Tesco's.

Anyway, good old-fashioned Solanum tuberosum has a lot going for it, including some attractive variations in sprout colour. 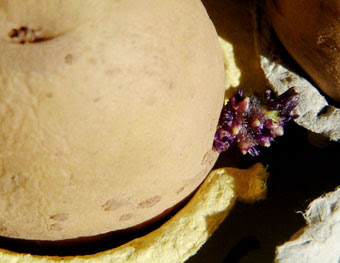 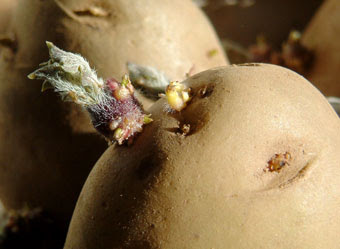 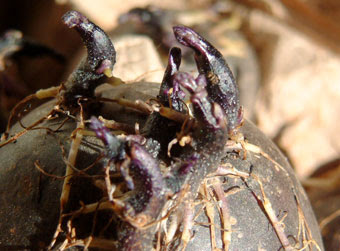 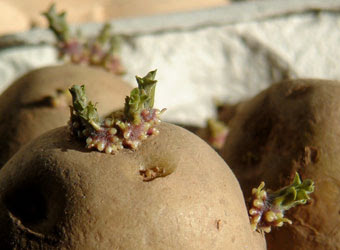 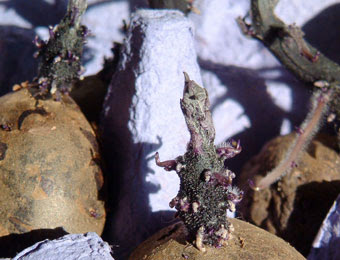 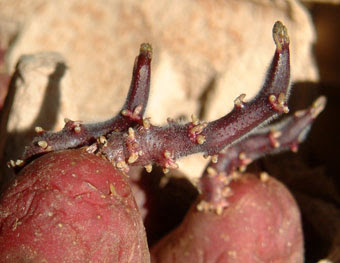 Beautiful potato sprouts. I think the picture of Kestral is my favorite--it is such a shockingly wonderful color.

I'm curious to read how your Mayan Gold potatoes respond to your garden.

I'll be interested to hear what you think of home grown Mayan Gold.

Quality photos Rebsie, shots of something most of us would not even give a second glance.

Interesting subject, potato sprouts. I will keep an eye on my Vitelotte seed potatoes. These are a French, purple variety I saved from last year. Wonderful purple veined foliage.

I grew Mayan Gold last year on my plot, I was impressed by the blight resistance of the folige which was smaller and more 'furry' than other types. It succumbed to blight in the end, but much later than the other varieites that I grew. Steamed they were very good to eat too. I'm trying Yukon Gold this year, as they did not have Mayan Gold at the Ryton potato day this time!

The Shetland Blacks look like some kind of alien invasion.

We grew Mayan Golds last year and loved them. They cook dead quick and are fantastic roasted. In fact you have to be careful not to over boil them, 2-3 minutes is all it takes and then only about 15 minutes roasting in a hot oven. We've just turfed out our first bag of Mayan Golds today. If you're interested, take a look at my gardening blog at http://blog.artandbridget.com/#home