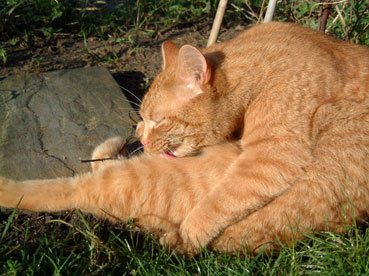 The garden supervisor gets stuck into a hard day's work

This is the time of year when you have to do crappy jobs. There's no getting away from it. As I half-cripple myself bending over the half-dug earth tugging at little bits of couch grass root, I have to remind myself that I will be grateful for it in the coming months. Couch grass is the major hassle in my garden. No amount of careful digging and tugging will remove it completely, but I have to make this annual assault on it as a token gesture. This time of year it pulls through the soil relatively easily. It gets harder in a couple of months when it starts to gain vigour, and once the crops have started growing it's virtually impossible to tug it out without simply breaking the tops off and I'm stuck with it for the rest of the season, choking everything in its path.

The other pest plant I had to contend with when I moved here in 2004 is horsetail, but that seems to have subdued itself in the last couple of years. It likes poor sandy soil, so maybe as I've been adding loads of organic matter to the garden it's finding it less hospitable here.

Another crappy job arose this week which I wasn't expecting. I have a fairly large ceanothus tree next to the patio which the lady who lived here before told me she planted by mistake. She thought she was buying one of the nice little shrubby ones but it turned out to be the full-size tree jobby. It is beautiful when it flowers in May, but it spends the rest of the year casting a permanent shadow over next door's garden (luckily the bloke who lives on that side isn't a gardener, but I guess he would like to be able to see out of his windows) and pinging little black seeds into our dinner whenever we eat on the patio.

Its no fun being a ceanothus tree in England. Its thick evergreen canopy of fleshy little leaves is designed to resist the drying effects of the warm breezes of California, but the icy blasts of a British February send the poor thing swaying and heaving all over the place. There is a good reason why most native British trees lose their leaves in winter ... the wind blows straight through them and does much less harm.

Anyway, we've had some seasonable blustery weather this week, during which a large branch fell off the ceanothus. I've no idea what to do with it, so I just left it there for the time being. But then when I was standing on the patio gazing idly into the middle distance I heard a creaking noise, and realised that another huge branch, actually about a third of the tree, had split down the middle and was in the process of collapsing under its own weight. So I had to rush off to the shed and get a bow saw and hack as much weight off the branch as possible before it split right down into the trunk. Luckily I got to it quickly enough to save the tree from self-destruction, but I ended up crawling back into the house hours later with lots of cuts and scratches and my hair full of twigs, begging for a cup of tea. And I now have a massive pile of branches in the driveway. Still, ceanothus twigs make great pea sticks, which will come in handy for the truly preposterous number of pea varieties I'm planning to grow this year. And my next door neighbour will be astonished to find he has some daylight coming through his back window. 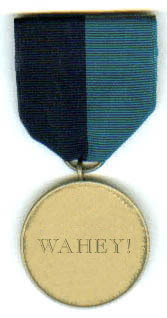 I've no right to complain really, because there's always someone who is cheerfully getting on with a crappier job than I am. Like Claire at Thankyou for the Days. Claire has taken on an abandoned allotment completely overgrown with brambles. When I say completely overgrown ... well, put it this way, when she started clearing it she found a couple of fruit trees she didn't know were there. But with a lot of determination and hard work she's already managed to clear enough ground to start planting, even if only a small amount at a time. I think she deserves a medal for her energy and resolve in taking on such a challenging project and I'm looking forward to seeing how the first season unfolds ... especially as she's planting lots of interesting heritage vegetables. Good for you, Claire!
Posted by Rebsie Fairholm at 8:54 pm

Claire is really making a go of it, she is very prominent on a forum I moderate and deserves to do well. A medal well deserved indeed.

Hi Rebsie,
saw a solution to your grass: cardboard (poor quality not posh printed stuff) or newspaper, but I find that blows away. All covered with compost. It all rots away during the year and gets turned in the next. It smothers the weed.

So glad there's no twitch (couch) or mare's tails in my plot. I have to keep an eye on the advancing creeping buttercup and ground elder!

There's nothing like wrestling with large shrubs to blow away the winter blues - great therapy!!!!

And ... is that my studio assistant making a guest appearance on your blog? :)

In my last garden, with heavy clay, I also had a lot of couch grass. Like Frederick said, I think the answer was really to find some other way besides digging, like mulching. Digging always left pieces behind in the ground.

The other thing was to work backwards from a solid edging, like a house or even just a very thick layer of mulch and make sure you got rid of it completely as you went along. After doing this, you only need to worry about it on the parts of your garden that border on uncontrolled patches of it.

It's really worth it to spend the time to get rid of it completely if you can!

For the Americans reading this, couch is usually called Bermuda grass in the US.

Now that is a top cat. I spent an hour in a Pilates class last night trying to achieve that level of stretch and got nowhere near it.

Couch is a bugger on my plot too (AND marestail). The hoe is my answer. They don't like it up 'em.

Yes, my crappy job is washing down the entire balcony before putting all the containers back. it turns gardening into housework ...
Remember I told you that you'd been nominated for the Garden Bloggers' Carnival? The link is up today.
Sue

I've been tugging buttercups for the past several days out of the veggie garden.. what a job! I wonder if frederick's cardboard/newspaper trick would get rid of those as well.