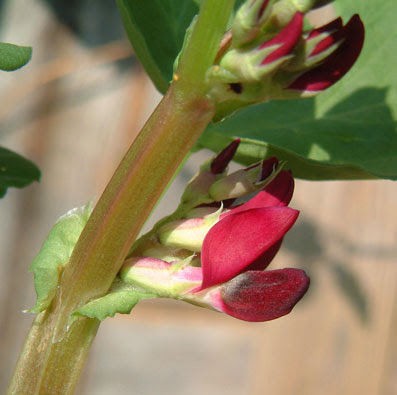 Here's a picture of a red-flowered broad bean (fava), another heritage vegetable treasure which I've already reviewed. I'm growing them in the patio border this year because they have a beautiful scent (one of the rarely mentioned blessings of broad beans) as well as that gorgeous colour. They look breathtaking when the sun shines through them because they have a very subtle translucence, but that's one of those things that cannot be photographed because the intensity of light and colour is beyond the scope of digital media. So you'll have to make do with this non-sunlit picture and use your imagination. Or grow some yourself. 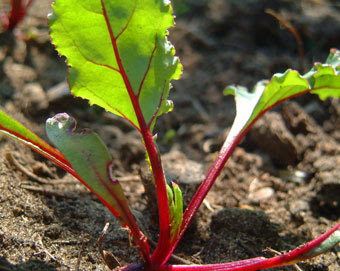 Another translucent red heritage vegetable I'm growing this year is this beetroot, a very old French variety called Rouge Crapaudine. It's a fairly rare one only available by mail order, which is probably just as well because you wouldn't want to have to go in to a garden centre and ask for it by name. Thomas Etty Esquire is one of the few suppliers who stock it. It's a bit different from yer average modern beet. The root is very long and thin, more like a carrot, and it has a black skin with a cracked and fissured surface. This one has a way to go before harvest time though.

The garden here is a paradise for slow-worms and I see them a lot (ssh, don't tell my mum, she's terrified of them and won't go out in the garden unless I tell her there aren't any) but I've never seen one like this before ... it has bright blue flecks all the way along its body. At first I wondered whether it had gone through next door's garden while he was respraying his motorbike, but nope, it really is that colour. It's the same bright azure colour you see in damselflies. And appropriately enough, seen here lounging under the Salad Blue potatoes. 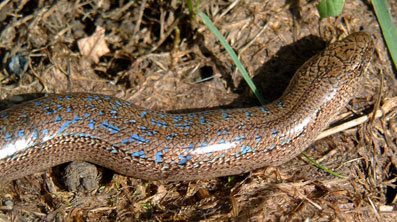 Errr ... mum, if you're reading this, it's not a real one, OK? Just a plastic inflatable one I put there for a laugh.

Two of my young apple trees couldn't be arsed to flower this year, but the third was an absolute corker. I was worried it would be unable to set fruit in the absence of a pollination partner (one day I'll explain why most apples are not capable of fertilising themselves, which has to do with them having one too many chromosomes) but luckily the neighbour four doors down has an apple tree which flowered at the same time, and despite the distance and the separating fences my tree got well pollinated. It's now covered in fluffy little apples. 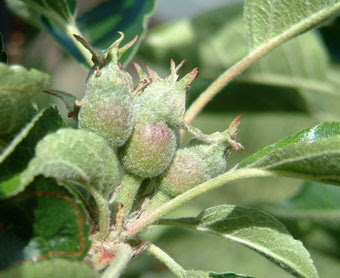 This is a variety called Ashmead's Kernal, which is over 300 years old and currently enjoying a comeback. I love it because of its acid-drop sharp flavour and crispness (I hate sweet mushy supermarket apples, bleurgh) but also because it's a local variety which originated in Gloucester, only 7 miles up the road. Another oft-plugged selling point for Ashmead's Kernal is its beautiful flowers, though actually I find them a bit big and blousy for my tastes and prefer the smaller crisper flowers on my other trees (when they can be bothered).

And finally, here's a picture of an upside-down cat attacking my cardigan. 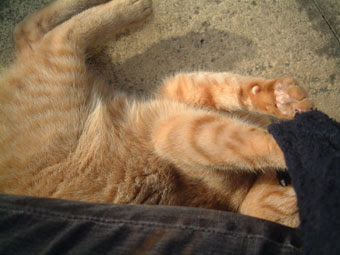 Posted by Rebsie Fairholm at 5:55 pm

Cool blog, i just randomly surfed in, but it sure was worth my time, will be back

Deep Regards from the other side of the Moon

Rebsie, those broad beans are beautiful! I might even be tempted to grow some next year if they look like that. I don't really like the taste of them, but then again I've never had 'real' ones, only supermarket ones.

Your apple tree sounds wonderful. I have an un-named apple tree on my allotment, but it's laden with fruit. I can't wait to have my first home-grown apple. We are lucky enough to have a pick your own apple orchard nearby, but they only have newer varieties - no old ones.

As we don't have slow worms, I googled them up.

This article talks about the blue:

cool!! Love the critters in your garden, the slow worm and the upside down kitty. I never knew broadbeans had a scent. I've never grown them before as I can't eat favas (allergic). I have some peas about to flower that have pretty red and purple bicolor flowers...its an old kind with yummy pods! :)