Today in the garden ... brassica bounty Purple sprouting broccoli, a favourite in British gardens since at least 1777. I've already harvested the main head and now it's producing loads of these sideshoots.

Well, here we are at the Spring Equinox, and the weather in the UK has turned bloody cold in the last few days which has thwarted my intentions to plant stuff out and resulted in some serious windowsill congestion. I have peas trying to climb up the curtains, turnips straining towards the light, a bathroom full of beetroot and trays of as-yet-ungerminated seeds stashed on top of bookcases because there's nowhere else to put them. I even have a crop of purple peas on the lid of the downstairs toilet (don't ask).

Meanwhile the things I've already planted out have survived remarkably well, and the old lady's net curtains get a big thumbs up for their weather-shielding properties. I've been using them around my early pea crops, and although the plants are looking a bit fed up after three days of buffeting by icy winds and hailstones, they are undamaged. I have some really thick bunched up super-frilly curtains in the shed which may come in useful for tender crops.

One thing that's completely unfazed by the wintry storms is purple sprouting broccoli, which is just coming to fruition now. Although there are now several named cultivars and hybrids available with different maturity times, 'purple sprouting' is often used as a generic name for assorted unnamed varieties, and certainly there's a lot of variability in mine, which came from three different sources. Some have large loose florets while others produce tight compact little drumsticks. Some have purple stems, some thick and others thin, some have a violet flush in the leaf veins ... they're all slightly different. But they all taste good, even if I slightly prefer the texture of the ones with small compact florets. 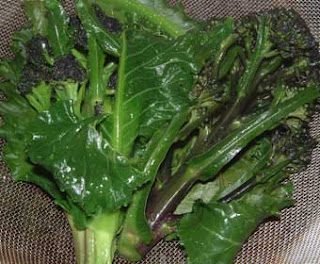 After a few minutes' steaming ... mmm, tasty! These two heads are clearly not the same variety, although they were both called Purple Sprouting.

I can't vouch for other cooking methods, but when steamed they do keep much of their colour. The stems and leaves go an intense green and the florets darken to purple-black, and will stain other food on your plate with purple colour. But that's a good thing ... the purple pigment is anthocyanin, a natural chemical with powerful antioxidant properties which is very good for you.

Also rich in anthocyanin and even more gorgeous in colour is the Purple Cape winter cauliflower, which is now coming to maturity. I've only got the one, I admit, but hey ... I've never successfully grown a cauliflower before, ever, so I'm quite excited by it. It's another heritage type, introduced into the UK in 1808, but it's still widely available, and rightly so. The colour is astonishingly beautiful ... much richer than that of purple sprouting broccoli. It darkens with age but is still gorgeous. I'm looking forward to finding out what it tastes like (and reviewing it). 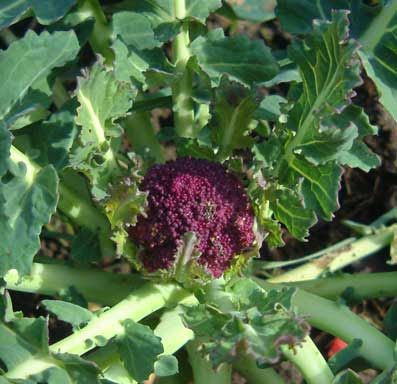 Purple Cape cauliflower. This picture was taken a couple of weeks ago when the colour was at its most intense. The heads darken as they mature to a deep royal purple.

Other than the brassica excitement, most of the work that needs doing in the garden at the moment is digging and tidying. I tend to put it off because it's not much fun, but I really must get stuck into it before it gets out of control. My sandy soil dries out very quickly in spring so the ground is plenty diggable. At this time of year it's relatively easy to remove couch grass roots, as they pull through the soil like spaghetti through bolognese, so efforts made now will pay off later in the year. But it's still a chore, so I don't do as much of it as I should. Ah well, the sun is shining and I must brave the freezing cold and get on with cutting back some more brambles ... 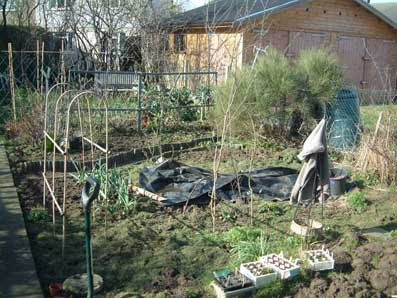 The garden in March. Most of the ground is mulched with grass cuttings. That big barn thing is not mine, sadly, it's in next door's garden.
Posted by Rebsie Fairholm at 12:33 pm

The purple broc looks very succulent. Your temps are better than ours. We are still at minus two degrees, so all digging will have to wait a little longer.

Over here in the Netherlands it's pretty cold too and we've had some hail, snow and some light night frost as well these past few days. Luckily most of my plants have survived. Like you I have seedlings coming out of my ears and they really need to get into the soil but .......... too cold as yet. I want to get my tatties in too, they've been chitting long enough.

BTW I either steam broccoli or stir fry it, that way it keeps its beautiful green colour. Hopefully the weather will get better soon and we both can get cracking with the planting and the weeding and the digging and the ...... :-)

Back when I used to have a garden, I usually tried to plant peas on St. Patrick's day.

Here in Michigan's climate (last average freeze is in May).

I thought peas could take a lot of cold, but reading this post, maybe I was just dumb lucky?