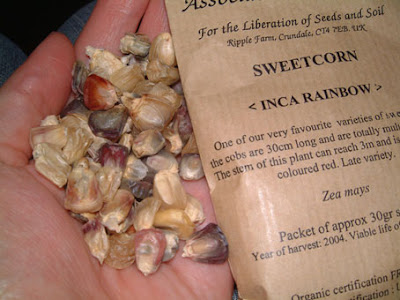 I'm sure most of you are aware to some extent of the wonderful work done by the Seeds Savers Exchange in the US and the Heritage Seed Library in the UK. Both are playing a vital part in protecting biodiversity and resisting the commercial exploitation of garden vegetables. This is especially important in the UK and Europe where restrictive and short-sighted laws introduced in the 60s mean it's illegal to sell vegetable seeds which are not on the official National List. As it costs hundreds of pounds to get each variety listed, it's only worthwhile for large scale commercial varieties and the result has been a catastrophic loss of heritage and heirloom varieties.

So I just wanted to mention another lesser known organisation in Europe which does similar work but on a much wider scale than the Heritage Seed Library. Association Kokopelli is based in France but its reach is global. It was founded in 1999 after its predecessor, Terre de Semences, was forcibly shut down under pressure from the French Ministry of Agriculture for selling unregistered heirloom seeds. Association Kokopelli operates under the same threat, existing as it does on the fringes of legality.

I discovered Association Kokopelli during my searches for a US-bred sweetcorn which I've coveted for a while, a beauteous multi-coloured open-pollinated variety called Rainbow Inca. It's quite easy to find in the US but apparently only from companies that don't do overseas shipping. I searched high and low for a UK supplier, to no avail. Maybe the seed companies know something I don't and it won't grow in the British climate, but I'd like to have the option to give it a go at least. I was on the verge of asking one of my American friends to order it on my behalf and forward it on to me, when I found that the UK branch of Association Kokopelli (based at an organic farm in Kent) stock it in their online catalogue, along with 1000 other organically (and sometimes biodynamically) grown heirloom vegetable varieties.

Their website is a little eccentric ... it's not very well organised for casual browsing so the best thing is to type something simple like "tomato" into the search box at the top. That will bring up a list of around 200 tomatoes of extraordinary diversity, from Uralskij Mnogoplodnij to Venus' Nipple, all open-pollinated (no F1 hybrids) and certified organic. 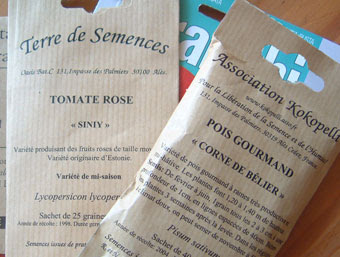 Association Kokopelli is way more than an heirloom seed catalogue though. It runs a project called Semences sans Frontières (Seeds without Frontiers) which encourages ordinary home gardeners to donate their surplus seeds to be distributed free of charge in parts of the world where seed availability is poor or non-existent. In the last few years the project has supplied hundreds of thousands of packets of seed in countries across Asia, Africa and Latin America and set up seed banks and educational facilities to help some of the planet's neediest people to grow their own vegetables. The seeds they distribute are all open-pollinated varieties. This is important because it enables farmers to save and replant their own seed. The Association helps out people who have no seeds at all and those who have been misguidedly given seed aid in the form of F1 hybrids (a favourite poisoned chalice of the seed industry) which lock them into a cycle of debt as they're unable to save seed from their crops and are forced to buy more each year.

When I bought my Rainbow Inca seeds I also bought a copy of their book The Seeds of Kokopelli written by the association's founder Dominique Guillet. Originally in French but now available in English translation, it comes with three free packets of tomato seeds (!) and is a truly encyclopaedic manual for the home vegetable gardener. Again there's an idiosyncratic homespun flavour to it and the translation has given me a few smiles but it's a unique and extraordinary book and I've never seen anything else like it. It gives descriptions of 2500 heirloom vegetables and grains, including many I've never heard of, with several colour plates full of lovely photos ... particularly of unusual tomatoes, peppers and squash. Seeds for most of them are available to the association's members free of charge, and many are also available for sale to non-members via the website. It also gives cultivation advice and detailed instructions on seed saving and cross-pollination issues for each vegetable. And an explanation of the importance of seed saving and biodiversity, plus a description of some of the charitable work they do in India and elsewhere. There's absolutely no way any commercial publisher would have produced a book like this and it's a delightful rough-edged gem. It's written with a profound respect for the earth and the seeds and a spiritual delight in the act of growing vegetables, but is still full of practical hands-on advice and scientific explanations. For vegetable nerds it's a joy to browse.

Association Kokopelli has a branch in the US too, called Kokopelli Seed Foundation, and their website is worth visiting just for the tomato diversity picture on the front page. This branch doesn't sell seeds (it doesn't really need to, since heirloom seeds are so much more easily available in the US and much of their work is already covered by the SSE) so the focus is on encouraging American gardeners to donate seeds. They will take any organically-grown seeds of open-pollinated heirloom varieties, and if requested they'll send you free packets of seed to get you started. As they point out on their website, a single tiny cherry tomato can produce 70 seeds and a single flowering lettuce can produce 10,000, so even gardeners with small plots can make a difference.

-- to promote the preservation of biodiversity through the distribution of organic and open-pollinated seeds of heirloom varieties of vegetables and grains.
-- to create a network of gardeners involved in seed saving.
-- to help Third World countries to develop sustainable organic agriculture through the gift of seeds and the setting up of seed grower networks.

You can read a wonderful little article about them here: Sowing seeds of change across the world
Posted by Rebsie Fairholm at 4:55 pm

Hello Luigi, thanks for the link to your biodiversity blog. It's just swallowed up half my morning! I'm very impressed with what you're doing and I've added you to my links list.

Ha, Luigi got here first (because he doesn't have a day job), but I agree with what he says. On informative books, like Dominique's, you might like to look up my friend Simon Hickmott's Growing Unusual Vegetables. My own book on seed saving is, alas, out of print.

I do enjoy your reviews of specific older varieties.

And on the Inca Rainbow, don't forget that, because it is open pollinated, you can do your own selection from the individual plants that may do best in Glos. Just be sure to save seeds from as many plants as possible to avoid the inbreeding depression that plagues corn.

Thanks Jeremy! I have seen Simon's book advertised here and there and will seek it out.

Indeed I am hoping to save seed from the Inca Rainbow, if I can. I won't be able to manage the 100 plants recommended by Suzanne Ashworth but I'll see what I can get away with.

What a wonderful organisation. I've learned so much today.

And you can always eat one ear per plant.

Wasn't aware of Kokopelli so thanks for that post. Have ordered the book in a moment of madness.

Jeremy ... you're right, but you haven't seen the size of my garden or the ridiculously ambitious number of different things I'm trying to grow in it! I need more land, but there's a huge waiting list for allotments in my area. But I will grow as many corn plants as I reasonably can, and hopefully produce enough seed to keep me going for a few years.

Clodhopper ... I'm delighted to hear that! I'm sure the moment of madness will result in many hours of reading pleasure. I don't know why AK has such a low profile when they do so much good work ... maybe they're just keeping their heads down to avoid unwelcome attention from the authorities.

Hey I've just started reading your blog (hence why this is so late). I saw your international shipping problem and I feel your pain. I'd love to be able to ship fruit trees to the US (we've got maybe a dozen easy to get varieties of cherries. You've got about 40). Still I was checking out some of my favorite seed sources for their international policy. SSE will ship with an order over $100. Johnny's select seeds http://www.johnnyseeds.com/ has no minimum order but you do need to pay for the certificate. I love them and they have a nice selection. On the bright side, with the exchange rate currently you're getting a much better price ;)

http://rareseeds.com/ the best melon collection! All heirloom! And cheap international shipping... They are a great company.

http://www.nativeseeds.org/v2/default.php no clue if they ship overseas. Great mission though.

http://www.territorial-seed.com/ One of my standby sources. Also, located in a climate similar to yours.