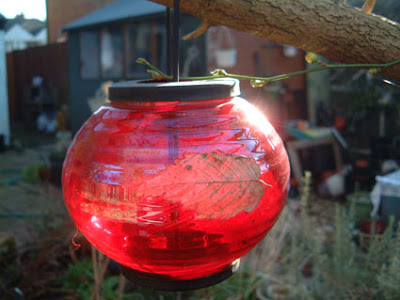 Photographed in the garden today, a glass lantern with one of last year's leaves still stuck to it.

I try to minimise the amount of ranting I do on my blog, but every now and then I have to allow my bleeding-heart pinko leftie idealism to burst out. So here goes.

Garden Organic (or the HDRA as I've always known it) is concerned at the moment about the loss of domestic garden space in the UK because of the way the planning rules are currently defined. Because gardens are technically regarded as brownfield sites it's very easy to get planning permission to "redevelop" them with housing. And don't I bloody know it – this practice is rife in Cheltenham. It's quite a green and leafy town and a lot of older houses here were originally built with good sized gardens, and what developers have been doing is either building extra infill housing in the gardens or, worse still, demolishing the original house and building a whole cluster of new ones on the site, destroying the gardens and endowing the new houses with barely enough green space to air a handkerchief.

Yeah yeah, it's good for the economy, blah blah, and it's partly NIMBYism on my part because I don't like my beautiful historic home-town being spoiled by people who are just out to make money and who don't have to live with their own ugly contributions to the urban landscape. But it's happening on a much more insidious local-scale level too, which is nothing to do with the planning laws and is entirely down to people's attitudes and priorities.

I live in a street where all the houses have good sized front gardens and driveways big enough for one or two cars. A sizeable proportion of residents are elderly people who constantly amaze me by keeping their gardens so lovely. What happens when the elderly people pass on to other places in this world or the next is that the houses are bought by people who watch Channel 4 property development programmes ... not to live in but to rip out all the original features and chuck them in a skip, "add value" by building out-of-proportion extensions, and raze the front garden with a JCB and replace it with gravel so that the people they flog it on to at a vast profit can park their Jeeps on it.

I'm feeling a bit sore about this at the moment because there was another one only this week, a little way along the road. A developer has done up a house and put it on the market, and one afternoon along came the JCB and the dumper truck, and erased, in the space of two hours, the large mature front garden full of attractive plants that had been nurtured and tended for 70 years. By the end of the afternoon there was a nice flat expanse of gravel in its place, and the SOLD board went up within days.

I completely understand why a lot of people don't want the hassle of caring for a garden when they're working full time and that they'd rather use the space for off-road parking, which is a godsend to multiple-car households and certainly in short supply. So it's an obvious thing for both developers and residents to want to do. But the number of front gardens left in our street is dwindling very fast in favour of a boring gravelled sterility (and more cars) and it's a damned shame I say.

It may be adding value to all the properties as the street goes upmarket, but it will mean an impoverished environment for all of us in the long run.
Posted by Rebsie Fairholm at 6:04 pm

I rather like your ranting so please don’t cut back. Rant away. If you can’t rant on your Blog page where can you these days? We have the same problem here in Altrincahm. Like your posts on Heritage Veg. I think I will try some myself this year.

Good lord, I can't believe its going on over the sea as well. I am sad for you, as I am sad when I see every open spot and farmers feild converted into tiny plots with enormous close houses on them while magnificant old house in the inner citys are rotting away and abandoned...