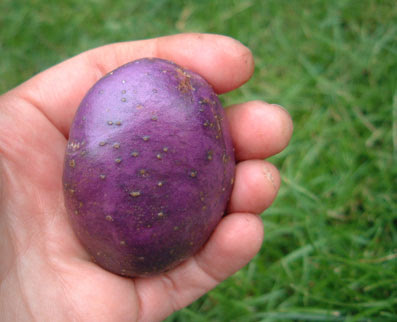 Age: before 1915
My supplier: home-saved tubers (this variety is now becoming much more readily available in the UK, so not hard to find)
Pros: gorgeous colour, trouble free
Cons: temperamental to cook

Edzell Blue is certainly a looker, there's no disputing that. The colour is magnificent when newly harvested and scrubbed ... really amazingly vibrant purple. It dries to a muted deep mauve which has an almost metallic sheen. Very pretty indeed. And when you cut it open the flesh is a pure bright white and looks lovely in contrast to the skin. The skin is shiny with freckles and some variation in colour. Tubers are a bit smaller than a modern spud and usually smooth and rounded with quite deep eyes.

Presumably it originates in Edzell, Angus (Scotland). It was first referred to in 1915 but is thought to have been bred in the 19th century.

The flavour is nice. It's not the most wildly exciting flavour I've ever tasted in a potato, but it is nice. Mild and delicate. Texture tends towards the floury end of the spectrum. 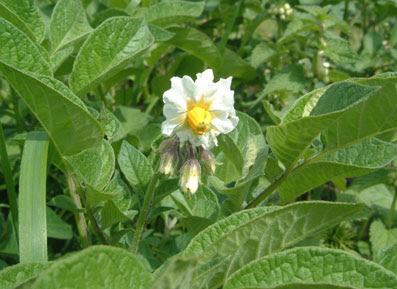 There is a definite art to cooking it (no doubt that's one reason it's rarely offered in the shops) and I haven't mastered it myself. It tastes lovely as a new potato when it's small, but boiling it is not an easy process, because the flesh seems to absorb water more than most varieties. Unless you get the timing absolutely right it falls to bits. Mash is an option, but it tends to be watery for the same reason. Baking is less hit and miss, although the spuds are on the small side for baking (not that it bothers me, 'cause they need less baking time if they're small) but they don't really seem suited to this either. They have too much dry matter in them and go very floury, and the baked flavour isn't very inspiring. The skins go extremely crispy and leathery and take a lot of chewing. Roasting seems to be the most satisfying option, and very nice it is too. Steaming might also work well. But all in all Edzell Blue is not what you'd call versatile.

And if you were hoping it might keep that colour when you cooked it, you'd be disappointed. The ice white flesh stays the same but the skin goes a brown colour like any other potato. And if you boil it the water will go dark green as the purple colour dissolves.

Edzell Blue is a Second Early type. The plants grow fairly upright with lightish bright green leaves, and were trouble free in my garden. They produce very pretty pure white frilly flowers with golden centres, which are really lovely. The flowers drop once they've faded and don't produce 'apples'. It was the first variety I harvested (June) and the yields were pretty good. No blight, because they are harvested before it strikes.

So on the whole my impressions of Edzell Blue are positive. It's not one of my special favourites, but that's partly a matter of taste. It's very nice and well worth growing.
Posted by Rebsie Fairholm at 11:35 pm

I have some of these this year but with spuds taking up so much space they have to earn their place in the garden and that depends on taste. So I'll see how they cook for me - they might not make it back in next year!

What a handsome spud!

I would be tempted to try them out in a stew...if the flesh seems to absorb water, perhaps it would absorb the "broth" from the stew. If it cooks down, it would thicken the stew broth...

We grew Edzell Blues last year having bought some from a garden centre. And this year, although we thought we'd successfully harvested them all, we had a number of verdant plants shoot up from the location of last year's crop. (We bought two different varieties this year and planted them elsewhere in the garden).

We've just harvested our bonus Edzell Blues and have 1274 grams which is a nice surprise! Will probably have them boiled with some fresh mint from the garden.

Can I ask how you store potatoes through the rest of the summer and through winter in order to keep them in suitable condition to plant out the next year?

The thing to do is to select the potatoes you want to save for next year ... some nice undamaged ones, ideally about the size of an egg ... and leave them to dry out in the sun for a few days. The idea is to "green them up" a little bit, as this triggers dormancy. But as Edzell Blue has a sun-resistant purple skin you may need to leave them a few days longer, just until they darken a bit.

Once they've been exposed to sunlight in this way they should keep until next year ... just store them somewhere cool and dark.

Oops, another important thing I forgot to mention ... it's best not to wash them! They keep much, much better if you just brush the mud off them and leave it at that.

Edzell Blues are ideal for stovies.

I grew up in Edzell and these were a staple for us. You need less water than you're used to and boil for no more than 20 mins at the lowest heat needed to boil before checking

Grow them every year using the smaller ones as seed tatties.