It's that exciting (for me) time of year when I get to choose my six rare varieties from the Heritage Seed Library. Thanks to the ill-conceived legal restrictions on the sale of vegetable seeds in Europe the HSL is one of the few sources of rare heritage varieties in the UK, and they aren't allowed to sell them to you, so the scheme works by sending out free seed packets to members who pay an annual subscription, currently £16. Membership gets you six packets of your choice plus an optional lucky dip. The quantities are not large ... typically 10 or 20 seeds, and while that's not a problem with things like tomatoes and beans it can be a little frustrating with peas, because 10 seeds is not enough for a proper crop and you have to spend the first year just growing them for next year's seed and not eating them (well, a few maybe). But that's kind of the point really, they want to encourage you to save your own seed, and I've no complaints because the work they do is priceless and they have rescued many very rare and precious vegetable varieties from extinction. They have also enabled me to grow some wonderful things which were completely unavailable elsewhere and which have really wowed me with their colours and flavours. All hail the Heritage Seed Library! 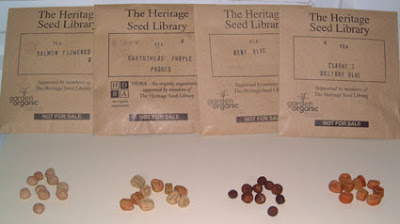 This year my choice is slightly restricted by my impending trial of purple peas. Although several strains of purple-flowered and purple-podded pea are now available commercially in the UK (I've been buying them up for months in readiness), the HSL maintains a number of non-commercial and heirloom varieties which differ in various ways from the readily available ones and I'm naturally keen to get get my hands on those. So peas have made up most of my HSL order for this year.

I've gone for two full-blooded purple-podders: Carruthers' Purple Podded and Clarke's Beltony Blue, both of which originate from Northern Ireland. The former has a lot of variation in its seed colour along with a small and variable amount of purple speckling, which none of my other purple podded varieties have. Hopefully they will both be included in the trial this season, although with only 10 seeds of each the priority will be bulking up seed production, so I may not get to do much in the way of taste tests.

Not purple-podded but still displaying interesting manifestations of anthocyanin pigment are Salmon Flowered, a green-podded bicolour pink-flowered variety unlike any other culinary pea I've ever seen and whose seeds are very attractive and speckly, and Kent Blue, a variety from ... er ... Kent which has bicolour purpley-blue flowers and unusual dark seeds. Both are round-seeded varieties, which means they are hardier than 'normal' peas but probably not as sweet.

I also grabbed a tall voluptuous white flowered/green podded pea called Magnum Bonum which dates from the 1860s and has been on my wish list for a while.

Ever the legume enthusiast, I've also been collecting more heritage French beans (with no idea where I'm going to put them all) of various sizes and colours. The HSL were able to supply me with Vermont Cranberry, and others I'll be trying out include Caseknife, Brighstone, Early Warwick, Coco Bicolour, Pea Bean and Canadian Wonder. Yum yum. 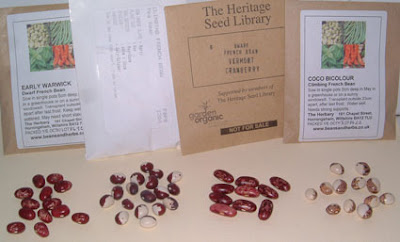