Groovy implement of the month: the kirpi hoe 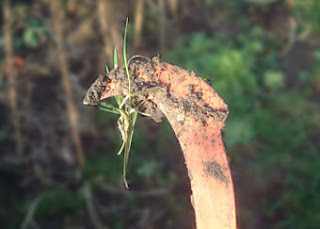 Weedkiller: it may look a bit peculiar but the kirpi knows how to sort them weeds.

As it was my birthday last week and my parents have long since taken to sending me the cash to buy my own presents, I decided to treat myself to a new experimental gardening implement, and the thing I most need is a hoe.

I am rubbish at hoeing. I hate doing it, so it gets neglected until it becomes desperate and difficult. It usually looks more messy afterwards than it did to start with. And I always end up decapitating a sizeable percentage of my crop by accident.

At the moment I have an old wooden long-handled Dutch hoe which was in the potting shed full of nice stuff I inherited from the previous owner of the garden. I get a lot of splinters off it, but I still feel smug to be using such a fine old-fashioned implement ... a real daughter of the soil thrill. Unfortunately though, it's only any good for weeding between traditional straight rows, and me being a bit eccentric in my planting layouts and shoving stuff in any-old-how or in strange wobbly rows according to my whim or the phase of the moon, it just isn't compatible with my style of gardening. Plus, it's pretty labour intensive. Two minutes scratching backwards and forwards with it and I'm completely knackered.

So I usually end up going off for a cup of tea and then weeding with a trowel, which works for me, but I knew there must be a better way.

I saw the kirpi in the Organic Gardening Catalogue run by Chase Organics. They are my no.1 tried and trusted supplier so I'm always open-minded to the weird stuff that sometimes appears in their catalogue. The kirpi is a traditional multi-purpose gardening tool from India. It costs 17 quid, which is more than I can afford to spend without serious consideration, so I Googled it and found that it had come out as Best Buy in a Which? hoe trial. So that was a good sign. I bought one.

Kirpis are hand made by a blacksmith in India, where a chunk of my 17 quid will help sponsor an organic farming initiative, and arrives with the blade neatly swaddled in a shred of colourful silk. You certainly couldn't be in any doubt that it really is hand made; it's kind of lopsided in its handle and the blade is coarsely beaten and crimped. It looks very eccentric, not least because of the lively green and orange colour scheme (the orange paint is a protective coating intended to wear off over time). It actually feels like a piece of craftsmanship though. It's a nice contrast to the modern mass-produced gardening tools I'm used to ... it really feels like it's been made with care and skill and designed by someone who understands what it's like to be on their hands and knees scraping weeds.

Unlike most hoeing tools, its shape is odd, curvy, spiky and sickle-like. It looks a bit unwieldy in the picture in the catalogue, but once you get it into your hand it feels very natural. Only trouble is it does look like an offensive weapon and I can just see my neighbour screaming off down the garden path when he sees me emerge from the house with one of those in my hand. But it actually has reassuringly few sharp edges. It works more by its ability to maximise your hand movements than by sharpness per se.

I was surprised at how efficient it is for the amount of effort expended. Most gardening tools are straight edged and symmetrical, and I never realised how inefficient symmetry can be. The kirpi is like an extension of your hand and its various odd angles make it very versatile. It's intuitive to use too, and the weight is nicely balanced.

At its most simple level you can use it like a Dutch hoe and slice the weed tops off at soil level, but it's nifty enough to get in between even the most eccentrically spaced plants and because of its efficiency you can use it for extended periods without getting tired. It's sturdy enough to use as a cultivator for ploughing up the top couple of inches of soil, and for making small seed furrows. It's not bad at levering weeds out from between paving slabs either.

What it really excels at though is hoiking swathes of grass out from between the stems of other plants, which promises to make it a godsend in this couch-infested garden. Where there's a lot of grass you can just swizzle it round the blade like candy floss and whip the whole lot out in one sweep. Very satisfying. With a bit more effort the hooked blade is good at digging weeds out from around the roots of plants. The coarse saw-teeth on the inner edge will cut through anything thick or fibrous that gets in the way. I would guess it could be used like a small sickle too for hacking through rampant undergrowth, but at this time of year I don't have anything much to try it out on. 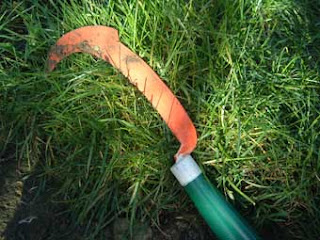 I did wonder what the point was of the sticky-outy bit on the top edge, but it was obvious as soon as I started using it: it acts as a heel which gives the tool substantially more shove. I also came to realise why the tool is lop-sided within its handle: the blade being closer to the edge on one side enables you to get a really good low angle on the soil if you want to (or not, if you turn it the other way up).

Any disadvantages? The blade can get a bit clogged up if you use it in soggy soil, especially on the serrated edge, but that's a small price to pay for the versatility of its design.

I'd certainly recommend it for anyone who likes to have one tool which instantly adapts to multiple jobs rather than lugging a whole array of different tools around the garden, or who wants to get the most power and least effort out of their wrist action. Or who relishes the idea of using something which will make other gardeners say "what the heck is that?"
Posted by Rebsie Fairholm at 3:33 pm

I was just thinking, yesterday, "I wonder what Rebsie is up to" and here you are.

My neighbor says he may chop down the weedy tree (Siberian elm) that has been shading the area where I used to garden. Maybe one day I will have my own peas and beans and tomatoes again!

Wow! A few years ago I was thinking about what my ideal hoe would be, and came up with a concept almost identical to this kirpi thing -- not as long in the body, and on a longer handle was my idea, but no doubt there are many subtleties to this that would only become evident in use, so I am sure that the real thing is way, way better than my concept-hoe. Would love one, but that is quite a price!

OK sold....you've convinced me. It also looks good for dealing with chavs threatening damage to the allotments or people who don't like folk music.

I want one of those ! It'll get round all the wibbly edges in my useless but pretty border and do a grand job in the veggie plot too !