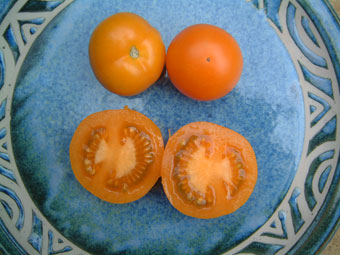 Lovely orange Tangella tomatoes, ripened on a windowsill after blight killed off the plants

Long time no blog ... apologies for the break. We've been having a rubbish time recently ... my husband has been ill for weeks, his mum's been even more poorly, and I'm exhausted. It's also been a turbulent time with the music 'career' and my band has now officially broken up. It wasn't entirely unexpected, but it has meant a lot of time spent on trying to salvage as many songs as I can and launch myself as a solo artist. Things are looking up ... the record label have given me my own page on their website and I sang a song on a new EP by The Owl Service which was released this week.

The garden looks pretty depressing at the moment. But I guess that's normal for this time of year. 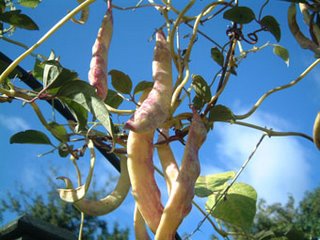 Cold nights are bringing out some beautiful red and purple streaking on these Meraviglia di Venezia pods, which are normally just yellow

The beans are mostly over. The runner beans (Black Magic) are now just a few bedraggled pods. Meraviglia di Venezia has not done well this year, and I'm beginning to feel that this variety isn't a good choice for the British climate. A weekend of blustery wind in September absolutely shredded it, and it hasn't recovered. Many of the pods have no beans in them at all, just a floppy leathery pod which soon shrivels. As the nights turn colder it's beginning to show some quite attractive purply-red streaking on the pods, which is very pretty but doesn't make up for the poor yields. Kew Blue has been much more impressive, and kept flowering and podding right up until the middle of of September when it suddenly realised it was autumn and dropped dead overnight. I had good yields of yummy pods from it though, so no complaints. Mrs Fortune's, by contrast, is still resolutely flowering and setting pods. It looks a bit tatty, but it's soldiering on. 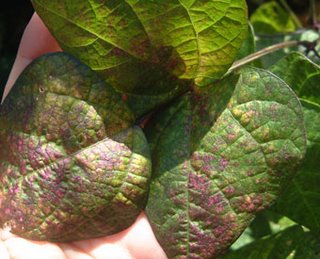 Autumn colours start to show as chlorophyll breaks down in the leaf. The leaves on Kew Blue beans produce an amazingly vibrant violet-pink.

But the most significant change in the garden is blight. Blight absolutely bloody everywhere. Britain's most popular fungal infection, and the horticultural equivalent of the Black Death. I had to destroy almost all my tomato plants just as they were starting to ripen up, and I reckon I've lost about 70% of my crop this year (in 2004 it was 100%). Some have ripened up OK indoors, but many more have rotted. That's the horrible thing about blight, even things which look perfectly healthy when you pick them quickly succumb, because the infection is insidious and invisible.

Not all the plants were affected in the same way. Clementine was the first to be attacked, but it spread slowly and the plants carried on fruiting for a further two weeks. Tangella remained blight-free until quite late in the season, but when it did catch it the plants were a blotchy rotting mess within two days. And because it was the latest maturing of all my tomato varieties the fruits were still all green. I did manage to salvage a dozen or so by picking them early and ripening them indoors on a windowsill. Funnily enough my potato crops stayed blight-free much longer than the tomatoes, although they have been destroyed by it now.

The only remedy available to organic growers is copper fungicide, which is poisonous enough in itself ... but I found it completely ineffective this year. It didn't even slow down the spread. Blight patches treated with the copper spread out and produced spores just as readily as untreated areas. According to Alan Romans' lovely Potato Book, the blight problem is getting worse for several reasons. We used to have only one type of blight in Europe, whose spores only reproduced asexually. But thanks to a consignment of infected potatoes a few years ago we now have a second type, which has been breeding with the first type to create new strains which quickly adapt and mutate, not only to resist fungicides but to overcome blight resistant plant varieties. The warm moist weather brought about by climate change gives blight even more of a boost.

He also says that the blight fungus evolved from a seaweed, which is a strange thought. 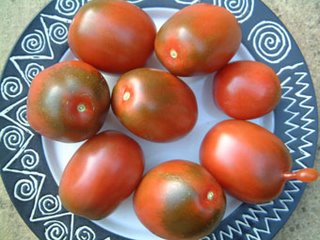 But one single solitary tomato plant is still out there in the garden, still with green fruit, but still (so far) unblighted. It's one of the American varieties I bought from a US supplier and which isn't available over here: Isis Candy. It doesn't have a lot of fruit on it, but amid the mayhem of disease and destruction there it is, still sitting there, growing its fruit. I don't know whether it's a blight-resistant variety or whether it just got lucky. But I'll certainly grow it again next year to find out.

Many thanks to everyone who has left comments or emailed me during my absence ... I do really appreciate it even if it takes me a while to respond.
Posted by Rebsie Fairholm at 7:38 pm

I've been thinking about you. Glad you're back!

Sorry to hear you have been having troubles Rebsie - Hope the folk recover soon, and good luck with the solo career - talent will out!

jamais deux sans trois as the french put it or as my mate jon puts it 'life is hard...and then you die'in a hilarious song he wrote. Sometimes one just has to laugh at it. Hope things ease off soon. Good luck going solo!

Thanks so much for your lovely supportive comments everyone! They do mean a lot to me.

warmest wishes! theres only one way to go, and that is up! =)