Today in the garden ... doom and gloom looms 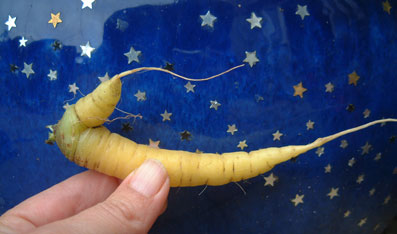 There comes a point in the year when you realise you're starting to push against the tide instead of riding along with it. Trying to keep the plants chivvied along while nature is trying to make them keel over. The mini heatwave in early September has extended the ripening season for things like tomatoes but it's also given the pests and pestilence a good boost. Everything seems to be under attack at the moment, when until now it had been an almost trouble-free year. Any parts of the pea plants which aren't covered with mildew are being infested with greenfly ... not just on the leaves, but getting inside the flowers and distorting the pods. My sweet peas are completely encrusted, absolutely seething with greenfly. It's really quite revolting, and although I've dosed them with biodegradeable washing-up liquid there are really too many to tackle, and hardly a ladybird or hoverfly in sight (I suspect their populations have suffered badly in the drought). I had to harvest my carrot crop, pathetic as it was, because the tops were afflicted with a spectacular eruption of small caterpillars. I don't even know what they are ... they look like small sawfly larvae. Another community of caterpillars has moved in on one of my leek crops and eaten the hearts out of about two thirds of the plants. Bastards.

The milk and water treatment I tried on the mildew has worked, but it only slows down the spread of the infection and doesn't get rid of it. (The same would be true of a chemical spray, it's just the tenacious nature of mildew in our climate.) Some of the Alderman leaves are now more white than green and the plants are wilting slightly as their mildewed stems struggle to take water up to the tops (which are currently 6ft high). Each day I cut out more blighted trusses from the tomato plants, again merely delaying the inevitable and slowing down its spread. As a last resort I tried using a copper fungicide (Bordeaux mixture), but all the tomato plants now have blotches of blight and it's spreading on a daily basis so there doesn't seem much point using something as toxic as copper just to prolong the life of the plants by a few days.

There's hardly a single crop that isn't being assaulted one way or another. 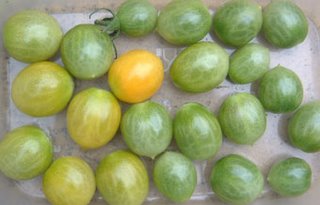 The climbing beans are mostly free of pests and diseases but they were damaged by some strong winds a couple of weeks ago and haven't really recovered. I have noticed with French beans that wind damages them far more than cold does. Mrs Fortune's is surviving the best; it's sagged a bit and some leaves are going yellow but it's otherwise looking robust and has just produced a new flush of flowers. Kew Blue is looking bedraggled and the leaves are going through odd colour changes (bright pinks and blues showing up as the chlorophyll breaks down) but it's still producing healthy new leaves and pods. Some of the older pods are now being attacked by blackfly. By far the worst affected by the weather is Meraviglia di Venezia, whose leaves wilt and shrivel even in fairly moderate winds. And being such a big plant, sprawling right over an 8ft arch, it looks a complete and utter disaster area with bits of shredded and shrivelled leaf hanging off a great tangle of sagging vines. But its yields are not much affected ... it's producing pods faster than we can eat them. Small succulent knobbly pods the colour of banana milkshake. 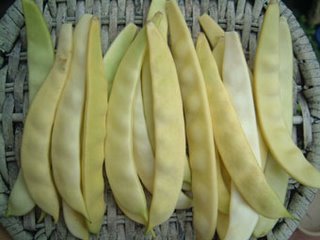 Posted by Rebsie Fairholm at 10:11 pm

So sorry for all your pests and disease, nature can be very cruel at times. I too have had a bit of a struggle this year with cabbages mostly, among a few other things. My poor gooseberry bush was eaten clear of leaves in the 2 weeks I was gone, and I don't even know what ate it!
Well, there's always next year!

Too bad about all of the pests, especially the blight. Once you have blight there is nothing to do but watch your plants die, even harvesting early is not usually enough to save anything. A few years ago I did a huge trial planting of tomatoes, and lost them all in one week to blight. I'll never again set aside so much of my garden to something that can be killed like that.

Of course it's not that any of the other problems you are having are any less important.

After you've been gardening in the same spot for a few years, you start to figure out what the risks are, and what you can do to reduce those risks. I think it's something everyone has to do when they start somewhere else. I'm still figuring out how everything works where I am gardening, and I've been there now 3 years.

Rebsie, I finally did a drawing of those faeries that steal your gold braid!
http://windywillow.blogspot.com/2006/10/faeries-steal-gold-braid.html

Yep, the weather's been a bugger, hasn't it? I phoned a friend who grows potatoes commercially to find out which varieties had shown the best blight resistance this year, and she said "none of them, not even the latest American varieties". If it makes you feel any better she also said "don't try to learn anything from this year"...