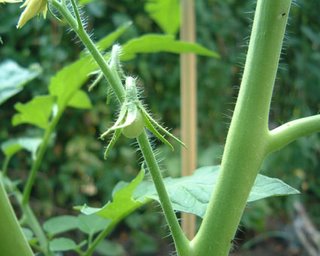 Potato update is still in preparation, so here's a botanically similar substitute.

It's still early days in the tomato season here, so there's no fruit to look at yet. But we're into that period where they grow like the clappers and new things are happening with them on a daily basis, so this is an overview of what I've got on the go. I'm going to experiment with making hybrids from these, and when I do I'll post up some instructions for hand-pollinating tomato flowers, like I did with peas. Tomatoes are naturally inbreeders, so creating new varieties is relatively easy. (I guess that's why there's so many out there already.)

I'm growing a daft number of tomato varieties this year. But because of space restrictions I'm not able to grow more than three of each variety. Not ideal, I know, but them's big plants.

This year, as I mentioned before, I'm growing three American tomato varieties. Copia is a large yellow and red finely-striped tomato that looks like nothing I've ever seen. Isis Candy (seedling pictured below) is bi-coloured red and gold and marbled inside, but has cherry-sized fruits and a good reputation for flavour. 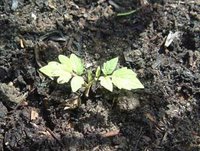 Black Cherry is an exceptionally dark black-red tomato with cherry-sized fruits. As far as I'm aware they're not commercially available in the UK, so I ordered them from a US supplier. This is not a cheap option, but it's not prohibitively expensive either; the only difficulty is that not all seed companies will accept international orders. Tomato Growers Supply Company is one that does. There's no guarantee that they will thrive in the British climate, but it'll be fun finding out.

Something very weird happened with my American tomatoes though. I think the faeries may have got to them. I very carefully planted six seeds (two of each variety) into a six-module planting tray. And eight plants germinated.

This is really baffling me. Tomato seeds can very easily get stuck together and be sown two at once, but I was meticulously careful to make sure mine weren't. Besides, the 'spare' seedlings germinated at the edges and don't look quite the same as the others so it's not obvious what variety they are. They grew from within the compost, not on the surface, so it's highly unlikely they were dropped there by a passing bird (besides which I haven't had any self-seeded tomatoes anywhere else, just in this one tray). The compost itself was hand mixed by me from basic raw materials: coir blocks, sand and perlite. I don't see how any tomato seeds could have strayed into that. Needless to say this has intrigued me so I'm going to have to grow the mystery seedlings to maturity just to see what the hell they are. 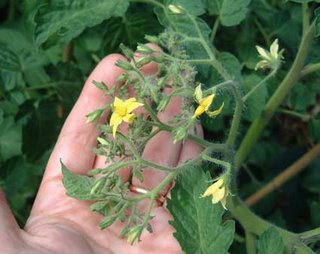 Another of the varieties I'm growing is Tangella, which is an orange-fruited variety of some vintage which is not often found commercially these days (not in the UK, anyway). I didn't choose it. I simply ticked the box on the Heritage Seed Library order form to accept a randomly selected seed packet. It was quite odd really ... I sent off my order form the day before I read up a section in Carol Deppe's wonderful book about breeding orange tomatoes for their beta-carotene content, and I thought "Dang! I wish I'd ordered an orange tomato so I could experiment with that." You can choose a maximum of six packets a year from the HSL plus an optional random one, so I thought I'd missed the boat until next year. But when my order arrived the thing they'd chosen to send me randomly was an orange tomato.

And the thing that's making Tangella stand out at the moment is that it has weird flowers. The buds are like little green stars. I appreciate not everybody spends their time on their hands and knees peering at tomato flowers, but I'm one who does, and take it from me, most of them form buds which start off as enclosed cones ... the sepals remain clamped around the petal cone until just before the flower opens (as in the Clementine photo above). That's usually the stage at which hand-pollination is done. Tangella produces buds with the sepals wide open and curled back right from the start, before the petal cone has even developed. So how you tell when it's ready for hand-pollination is something I haven't worked out yet. They seem to have seven sepals too, rather than the more usual five. 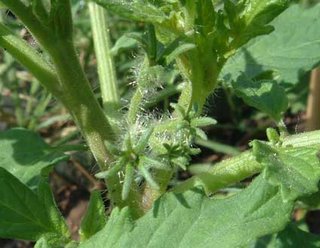 Enlarged view of star-like buds on Tangella. The tiny pimple in the middle is the as-yet-unformed petal cone.
Posted by Rebsie Fairholm at 5:10 pm

I love reading your blog. I like hearing about the things you are curious about, and the experiments you conduct. I like your pics -- it's a good thing I live on this side of the pond, as I'd be inviting myself for dinner..... Thanks for sharing all this with us.

Awww ... you've blissed me out with that comment! Thank you.

You are most welcome.