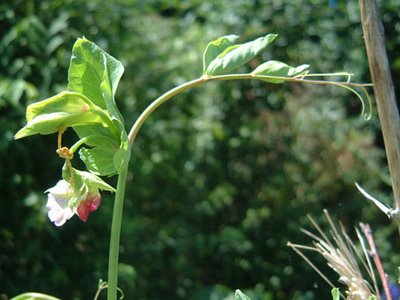 One of my hand-pollinated buds on Mr Bethell's Purple Podded, wearing some gold braid as a marker. This one was crossed with Alderman a few days earlier. I've found that if you leave the sepals intact when you do the pollination jiggery-pokery the flower will open as normal (as this one has). Tearing off the sepals makes the petals dry up and the flower dies off without opening. It's just a cosmetic matter, but I like to make the most of me flow'rs ...

Apart from the broad beans, which were from W Robinson & Son, all these vegetables came from the Heritage Seed Library.

I've been watching the progress of Mr Bethell's Purple Podded with great interest, as you'll have noticed, and overall I'm quite impressed with it.

It doesn't seem to like the really hot weather ... the lower leaves have died off considerably during the last couple of days. It's also stopped flowering now, but that's probably because I've allowed some of the pods to reach full maturity (this crop is mainly for seed production ... the Heritage Seed Library issues its pea seeds in packs of 10, which is not really enough for a proper food crop but does allow you to build your own stash of home-saved seed, which is kinda the point really). 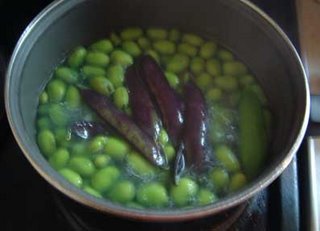 There's enough there to provide a tantalising taster anyway. I'm finding that the pods are lovely as mangetout if you use them when they're small; once the peas start to swell inside they go a bit stringy. They are a beautiful maroon-purple (translucent in sunlight) but lose some of their colour when they're cooked ... still retaining enough to make them a show-stealer at dinner. The flavour is not outstanding when they're larger but if you use them young they're very sweet indeed. 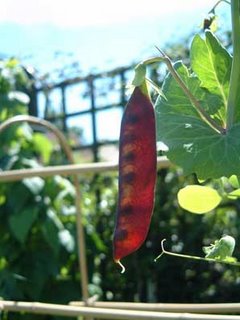 And here's what you get when the peas are fully grown ... as you can see, they're bright green. They're also larger than I expected, having just seen the ones at the Rococo Garden which looked miniscule by comparison. These are as large and green as a conventional culinary pea. I harvested these when they were past their best for eating, because I'm planning to save them for next year's seed, but I tried a couple (raw). They have a distinctive and unusual flavour, I'll say that for them. Kind of slightly nutty and mealy, and not massively pea-like, but still sweet and pleasant. Something quite old and earthy about them, but I mean that in a nice way. They don't have the exquisite flavour of Alderman, but then Alderman is an altogether superior pea on every level and I bow down before it. 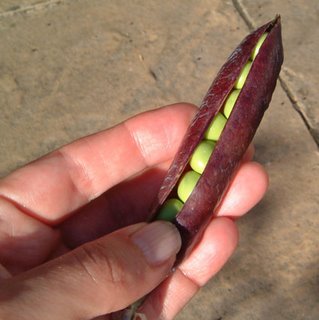 I'm beginning to think my destiny here is to run some larger scale and more scientifically rigorous trials of purple-podded peas. The thing is, they've only just started appearing commercially in the last couple of years and are still something of a novelty ... so most of the ones you come across in catalogues are just called Purple Podded (the only named variety I've seen is Ezetha's Krombek Blauwschok). But the big differences between mine and the one in the Rococo Garden clearly shows they aren't all the same variety. Some are advertised as having purple flowers, others pink, others bicoloured. Mine have large sweet peas while the Heligan vegetable book describes their purple-podded peas as "virtually inedible". So I'm going to buy up a selection of purple-podded varieties from anywhere I can find them and grow them all together next year for comparison. See how similar or different they really are.

I also had the pleasure of briefly sampling Champion of England both in pea and mangetout form. Both were sweet and yummy eaten raw. I only have four plants though, so I'm having to keep most of the peas for sowing next year. 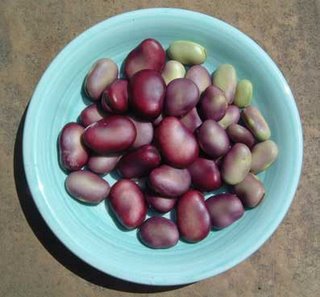 Remember I put my Grando Violetto broad beans down as a crop failure? Well, this is what I salvaged from the blackfly encrusted stumps I finally slung in the organic recycling bag. Not bad from only four plants, and I'd had a couple of meals' worth off them already. They taste very nice indeed, and have a pleasantly sturdy texture a bit like butter beans. But this one isn't on my favourites list I'm afraid. The beautiful purple colour in the beans doesn't develop until they're fully mature and therefore past their prime for eating, so you really have to eat them while they're green and look like any other broad bean. Though you can dry them ... which turns them a lovely velvety purple black colour. The plants have no blackfly resistance at all, which makes them less than ideal for organic conditions.

Moving on to the climbing beans ... ooh look! Mrs Fortune's, which I had branded the ugly duckling, has produced pods with mottled blue streaks! 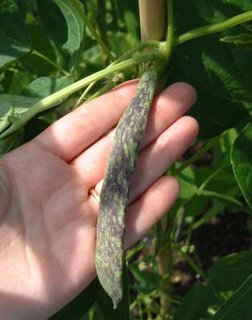 They're a proper blue too, and colour up best in sunlight ... very decorative indeed.

They start to go a bit knobbly as the beans develop, some pods are wider or knobblier than others, and most have a little curved 'tail' at the bottom. It's also a high yielder. The pods seem to form almost as quickly as you can pick them. So we had some for tea, cooked as 'green beans'.

Before I go any further I should point out that some climbing beans are optimised for eating whole as young pods and others are best left to mature as dried beans. If a variety is good for one usage it's generally less good for the other. I think Mrs Fortune's is bred for dried beans, not for eating fresh.

So ... it isn't perfect. The colour vanishes completely on cooking, even with just a light steaming. *sniff*. The pods have a slight roughness to them after cooking, but a very soft texture when you eat them. The flavour is ... um ... not bad. A bit nondescript really.

Kew Blue on the other hand is meant as a pods-an'-all fresh bean, and it's very swish. Mine is now starting to set pods in great numbers, and they're dead straight (when young at least), velvety and very slender. They're a dark purple colour with a flush of green in the younger pods. They look much more elegant than the pods on my other purple bean, Trionfo Violetto, and I have to say they trump it for taste too. I had some steamed this evening, and they were sweet and lovely. Very fine indeed. The colour changes to dark green after cooking, and they have a very nice texture. I think I can recommend this variety if you want beautiful plants and super-tasty pods ... it looks to me to be the best of the climbing beans I've grown. As far as I know it's only available from the Heritage Seed Library.