Today in the garden ... a lot of bluster 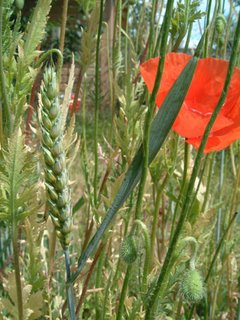 The recent rains may not have done any damage but the wind has been ferocious over the weekend and that has caused some havoc. A huge branch came down off a mature lilac tree in the middle of the garden. Fortunately it fell onto the lawn and didn't wreck anything (or anyone) in the process. It might actually be a blessing because it should let more light through into the borders behind it (which have become so shady almost nothing will grow there) and the bottom half of the branch itself is thick, 5ft long and perfectly straight ... a veritable pole, which is bound to come in useful for something if I strip the leafy bits off and dry it out.

Unfortunately the strong winds did some damage to my beloved Alderman pea plants, which is entirely my own fault because they weren't supported properly. I'm hoping they'll survive long enough to provide me with my experimental hybrids and a few more opportunities to stuff my face with their bounty. I did the second stage of the pea pollinations, i.e. re-pollinating the ones I did yesterday. Or four of them, anyway. I couldn't find the other one. Despite my use of very eye-catching gold braid tied around the buds some of them seem to just vanish into the greenery never to be seen again. Even the purple-podded pea has a gold-braid missing, and I know exactly where I put them all (there are only eight plants, so they have nowhere to hide). I'm beginning to suspect the faeries come out and untie them during the night. 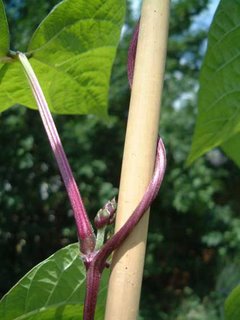 In the bean garden, Kew Blue has started flowering. The buds are a rich purple but open up into a slightly scruffy pink-mauve flower. No pods yet either ... the first few flowers have fallen off without setting. That seems to be normal though for most beans. While they're actively growing the plants seem to focus all their energies on surging upwards. Trionfo Violetto, whose flowers are a similar colour but more elegantly presented, has started to set pods now. The Meraviglia di Venezia (both these varieties are from Seeds of Italy) is growing faster and has reached the top of the arch but has not flowered yet (it's a late maturing variety). 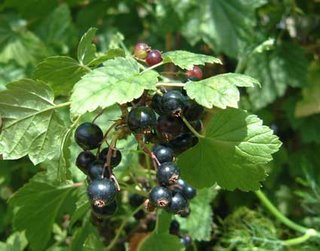 The blackcurrants are yielding some excellent fruit at the moment. There are three main bushes in the garden and I think there's at least two different varieties there, as they taste noticeably different. I've no idea what varieties they are, mind. All I know about them is that they have been here since 1967, because the old lady who owned the house before us told me she brought them here from her previous garden (on the west side of Cheltenham). So they are over 40 years old. And one of them in particular has the scrummiest berries I've ever tasted, really strong and complex in flavour (but then I have weird tastes because I like sharp-flavoured fruits much more than sweet ones). I don't think they'd been pruned for 40 years either, judging by the state they were in when I moved here, but they have regenerated successfully from the rather drastic remedial action I took on them. They were literally bearing their feeble yields on the tips of 5ft long horizontal branches which were dry and dead and clattered together like old bones ... they gave me the creeps as well as taking up an entire border on their own. I had to take the risk of killing them by cutting them right down to the original stem (or trunk, rather) and fortunately they decided to survive and resprout, and are now fruiting, albeit in smallish amounts at the moment, on healthy new branches. I've taken cuttings too. 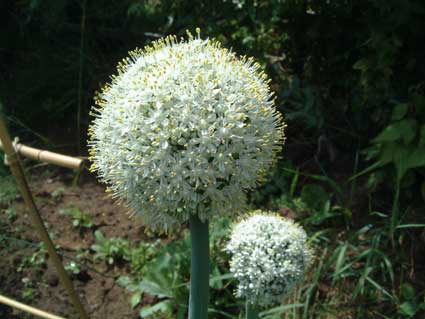 Something else that's nice at the moment is these onion flowers. I've been growing them for seed and have been surprised at how beautiful they are ... as lovely as the drumstick ornamental onions like Allium giganteum, only white. This variety is Jet Set, which originally came from Chase Organics. I've got 20 or so plants here but I'm only going to keep the best six. The others are being grown solely as pollen providers. This is because onions are outbreeders (see my post on F1 hybrids if you want an explanation of why this matters) and need to spread their genepool more widely. If I just grew the six plants there is a higher risk that their offspring would be feeble and pathetic due to inbreeding depression. They are pollinated by insects of various kinds ... flies, moths, hoverflies ... who just seem to land on the flower heads and stand around for a bit, then fly off somewhere else. But it obviously works. A couple of days ago I was out there in the twilight watching a moth giving one of the flower heads a good trampling. Although it was just walking around, it was beating its wings so fast I could only see them as a ghostlike blur.
Posted by Rebsie Fairholm at 11:28 pm

Love the image you write about.. that faeries come in the night and untie your golded threads. I might like to make a drawing of that!
Pretty field poppies, I just love them!

Thanks Salix Tree! Let me know if you do a drawing, I'd love to see it.