Today in the garden ... an inedible wolfpeach 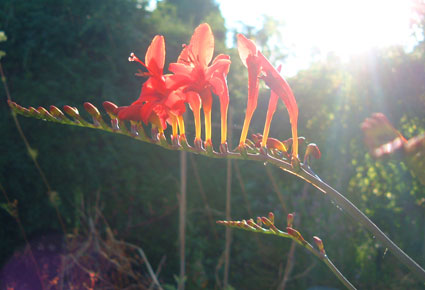 Crocosmia Lucifer ... ubiquitous in British gardens at this time of year but you can see why

I haven't had much time this week for gardening or blogging, because I've been *ahem* back in the recording studio working on a waily Celtic folk song. If anyone's interested in giving it a listen you can find it here.

After I'd harvested a patch of Marfona potatoes the other day I found this lying on the ground. 'Scuse the state of my fingers. 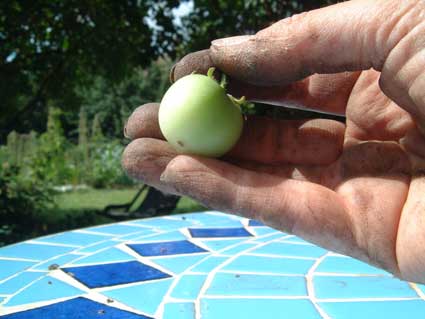 I know it looks like a green tomato, but it's actually a potato apple. It came off one of the plants I harvested, and none of the others have any. You don't see them very often because potatoes have got accustomed to reproducing by tubers and most of them no longer bother to set fruit. Some varieties can't be arsed to flower at all, and those that do often produce ineffective pollen. But some spuds produce these tomato-like fruits, emphasising how closely related they are to tomatoes. And to the nightshade family too. Potato apples are poisonous. If the tomato is known as an edible wolfpeach (that's what Lycopersicon esculentum means) then I guess this is an inedible wolfpeach.

The first time I saw them was a few years ago when I had an allotment, and I planted some Desirée potatoes which had come from the supermarket and gone all manky and sprouted (yes I know you're not supposed to do that, but do I look like I care?) I turned up one day and all the plants had these little green tomatoes on them. I thought "what the heck are they?" ... I had no idea potatoes did that.

Potato apples are not a lot of use ... they just divert energy away from the tubers. But to nerds who like raising brand new things from seed they are a gift. Inside them are lots of seeds which, if planted and viable, will grow into a new and unique potato variety. Potatoes don't tend to come true from seed, so even if my fruit was self-pollinated or pollinated by another Marfona plant, the resulting offspring would not be Marfona. It would be a reshuffled combination of various genes that went into Marfona. That doesn't mean it will be anything special ... but it will probably be unique.

The downside is that it takes three years to grow the seed into a plant that's capable of producing decent sized tubers. So it takes a while before you can evaluate it.

Unfortunately this one probably isn't ripe enough to have viable seeds in it. If I'd seen it before I harvested the plant I would have left it to mature a bit, but there you go. I'll keep it just in case.
Posted by Rebsie Fairholm at 11:09 pm

I did not know about the potato apple. Thanks for an interesting post, and the song was beautiful`

Thanks Carol! I do appreciate you checking out my music.