Today in the garden ... a dud spud 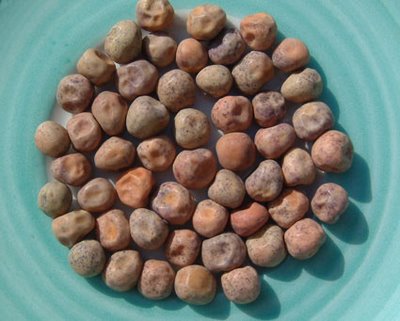 Well, you know how it is. You decide to conduct some proper purple-podded pea trials and you start ordering up a few varieties, and then you find someone's selling a nice yellow-podded pea. It seems a shame not to buy some.

Actually Golden Sweet has been on my wish list for a while, and I thought I could only get it from the Heritage Seed Library. It makes sense to buy these rare things from commercial sources wherever possible, to save my precious six-packet HSL quota for those varieties I really can't get anywhere else. These seeds came from The Real Seed Catalogue, whose website has a lot of useful information about seed saving as well as a lovely selection of open-pollinated vegetables. You know a seed company really is passionate about biodiversity when they tell you how to produce your own seed instead of buying it from them again next year.

Golden Sweet seeds are extraordinary. They are spattered with purple freckles. There's also considerable variability in the colour of the peas themselves, which is a characteristic of this variety. I'm completely in love with the seeds and it's going to be difficult to bring myself to plant them! Golden Sweet is believed to be one of the cultivars used by Gregor Mendel in his pea hybridising experiments back in the 1850s; the gene for yellow pods is recessive, and crossing this pea with green-podded varieties helped Mendel to spot the inheritance pattern which became the basis for modern genetic science. And I don't doubt he got as much joy from staring at the purple-speckled seeds as I do. At some point I will do a post dedicated to Gregor Mendel because he was a great bloke and I often think about him when I'm poking my scalpel up a pea stamen. 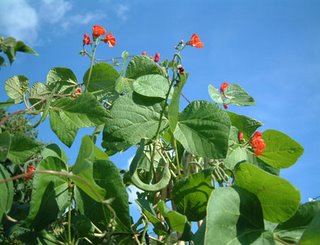 Meanwhile, runner bean Black Magic is starting to supply the table. My plants don't look too happy to be growing up close to a tall jasmine hedge, but needs must ... the neighbour has a garden full of runners flowering at the same time and I have to minimise cross-pollination. Black Magic is a little bit quirky looking. The flowers are orangey-red and many of the pods curved into a sickle shape. I'm not sure how much the pod shape is inherent in the variety and how much is caused by lack of water, growing under a hedge during a drought.

I've been reading up a few things in recent days in praise of potato microplants, and I concede that they do have their place; they make rare unlisted heritage varieties available which would otherwise be illegal to sell as seed potatoes (due to a daft and outdated EU law) and they are completely disease free, which is a real plus point if you're growing them in a nice sterile polytunnel. But this photo of my Witch Hill potato harvest illustrates the frustration they can pose for ordinary gardeners who want to grow them organically. This little slug-ravaged stash is all I have to show for two seasons of nurture and care. If I'm lucky, I might be able to get this variety established properly in the garden after one more year. 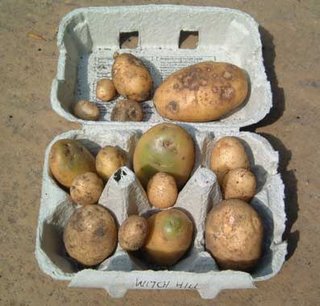 Pathetic results once again from the rare but much praised Witch Hill. Undamaged tubers salvagable for next year's seed are barely enough to fill an eggbox, leaving the scabby and mollusc-ravaged specimens in the top tray for me to eat as tasters. Yum.

But at least I got to taste them. And yes, the flavour is something pretty special, it's not just hype! If you like floury-textured spuds then this is probably potato paradise. I'm a waxy-texture spud lover myself, but even I appreciate how good this one is. And I can also see how it got its alternative cultivar name, Snowdrop. The flesh is so floury it turns to something resembling a crystalline powder after cooking ... which looks just like a sprinkling of fresh snow. But it doesn't disintegrate, it has a consistently good texture. It's thin skinned and smells nice. At least now I know it's worth persevering with, anyway.

I'm off to North Wales for a few days, so there may be a short hiatus in the blog ...
Posted by Rebsie Fairholm at 12:34 am

I'm tempted by heritage varieties mostly to keep them in cultivation but it is frustrating when you get results like Witch Hill.
If I were to grow one heritage variety next year (I've a preference for waxy earlies - I guess most heritage are floury lates!) what would you suggest?

If I was only growing one heritage type it would have to be Mr Little's Yetholm Gypsy, which is not exactly waxy by modern standards but waxier than most. I grew it from microplants and they were much, much more successful than the Witch Hill ones, although it still took two seasons to get a good crop.

Of the more readily available heritage varieties though I would go for Duke of York ... either the Red version or the original one which is about 50 years older. It's one of the better varieties for reliability and flavour and it's also a first early.

Golden Sweet is available from Dobies, too. Thanks to your fantastic blog I shall be trying it this year.