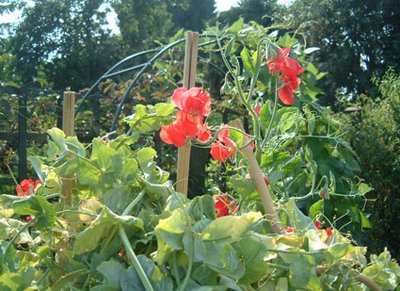 Sweet peas growing through the sagging remains of my Alderman crop. I'm a great believer in mixing up pretty flowers among the veg. For most things it encourages better pollination, although peas don't need bees so in this case it's purely decorative.

I've had grovelling apologies from both my next door neighbours today. Mrs Leafblower apologised after she accidentally hosed me down while watering a capacious shrub growing against the lattice fence which separates our gardens, having not noticed me crouched down sowing seeds on the other side of it. Then the other neighbour's mum came round to apologise for an incident early this morning when her son's dog spotted a cat in our front garden (not one of ours) slipped his leash and came charging through the hedge in pursuit. Fortunately for the cat, this dog is endowed with a peculiarly short attention span and only got half way across the garden before stopping to crap on the lawn.

Despite all this excitement I managed to get the Alderman peas planted out in the former potato bed. The soil has fluffed up a treat after having a sack of horse manure dug into it. I've put in a row of canes for them (for stability) and a few prunings from the Ceanothus tree for them to hang on to. This seems to be extremely important for peas, getting the 'pea sticks' in straight away; they know when they've got something twiggy to get their tendrils round and respond accordingly. If you don't provide them with twigs, they sit there and sulk.

I've had a lot of failed pea crops in the past, and have had to experiment a bit to find a method of growing them which works for me. It may not work for anyone else, of course. But this is what I do. I put eight or ten bog-roll tubes on a large saucer (if I need to label the varieties I write on the tubes with a marker pen) and stuff them firmly but lightly with compost made from coir, sand and perlite. I don't bother being precise about proportions of different ingredients ... I try to trust my gut instinct with it. But I recently upped the perlite quota substantially after most of my precious Champion of England seeds rotted off ... it helps keep the mixture open and aerated. I keep space between the tubes too to allow air to circulate around them (otherwise they're prone to going mouldy). I sow two seeds in each tube. 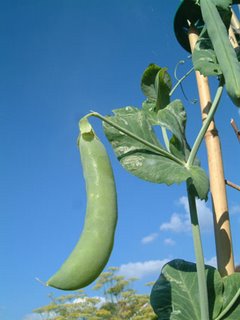 Champion of England. It's tall.

The trouble with pea seeds is that they rot very easily, but still need plenty of moisture to germinate. Getting the balance right so that they survive the germination stage can be quite tricky. What I tend to do is keep the bottom of the saucer regularly topped up with water, without letting it build up to the point where the tubes are left standing in water. If they need the water, they soon suck it up. I usually water them several times a day in this manner. Watering from the base is the key though; it keeps the area around the seed relatively dry while encouraging the roots to push downwards to find the moisture. Usually the roots are poking out the bottoms of the tubes within a few days (and at that stage it's even more important to keep them well watered so that the roots don't dry out and die off). I still get the odd seed going mouldy but on the whole this method works pretty well for me.

And incidentally, I'm not just being a cheapskate here: I rate ordinary bog-roll tubes more highly than the purpose-made root-trainers you can buy in garden centres. They're sturdy, porous and biodegradable. All lavatorial cardboard in our house is assiduously collected throughout the year for this purpose. 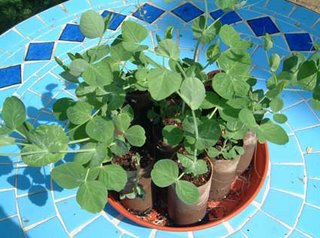 My Alderman seedlings, well rooted and ready to make a bid for freedom

I'm currently trying to persuade my home-saved seed to germinate, but most of it is rotting off before it even thinks about sprouting. I'm not sure whether this is anything to do with sowing it fresh (I had no problems at all with the Alderman seeds which were dry from a packet) or whether it's some other factor. My thinking is that it's probably the balance of moisture and temperature which is to blame. But getting that balance right is still a matter of trial and error. According to Carol Deppe, and I've no reason to doubt her, you can sow fresh peas as soon as they mature without having to dry them down first. Just soak them in water until they germinate, she says. Well, I've tried that. And no matter how regularly I refresh the water I'm just ending up with a stinky fermenting mess.

It could of course be down to the weather. Peas are a cool-climate crop and sowing them in these mad summer temperatures is not ideal. I will try my next batch in the coolest place I can find. But these hand-crossed hybrid seeds are not easily replaceable so I can't afford to keep losing them.

And for my next trick I'm trying out a plastic pot sterilised in hot water, a posh expensive coir medium mixed with a little vermiculite, and sowing the peas with just a sprinkle of vermiculite on top. In theory this should keep the seeds moist but still allow plenty of aeration. I bloody hope so anyway.

The hand-pollinations were ostensibly successful. I have several nice plump pods full of home-made F1 hybrid seeds waiting for the right moment for harvest, and have gathered in a few already. They don't generally have as many peas in them as a naturally self-pollinated pod, but that's normal. 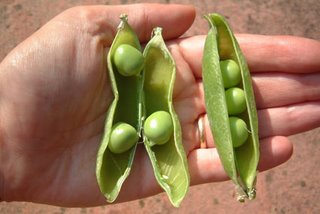 Lovely plump HUGE seeds from an Alderman x Mr Bethell's Purple Podded cross ... even if there are only three in a pod.

OK, here comes a load of nerdy botanical stuff. I've noticed that the hand-pollinated pods with the most peas in them are the ones where I left the outer sepals intact on the flower bud. When I learned to do pea pollinations I had instructions to take the sepals off first to make the tiny buds easier to handle. But I find it results in the outer petals quickly drying out and falling off, and I'm now wondering if this causes the stigma to dry out excessively. I've tried a few different variations and I'm finding that the less damage I do to the flower bud (even the parts which don't seem to matter) the more fruitful the pollination is, with the healthiest pods and largest pea numbers resulting from those where I did nothing more than cut a small slice in the keel to hoik the anthers out. I've recently discovered that removing the sepals is actually unnecessary as they're quite easy to fold back out of the way (tearing them slightly seems to do no harm). Leaving them mostly intact makes the pollination job marginally more fiddly but seems to increase the average yield from 0-3 peas per pod to something more like 6-7 per pod. Ha! Plant-breeding is a constant learning experience.

I've also, incidentally, noticed a higher success rate in the buds which I pollinated twice (emasculated and pollinated on one day and then pollinated again 24 hours later). So even though the stigma is supposedly receptive in the early bud stage, it does seem to be more receptive if you give it an extra day.

Knowing when to harvest is the biggest unknown for me at the moment, and the info I've found about saving seed from pea plants tells you to leave the pods on the plants until they're completely dried out, several weeks past the eating stage. That's all very well under optimal conditions, but it doesn't take into account the summer ravages of the dreaded pea moth. If I leave the pods on the plants until they start to go brown I'm finding them full of horrible little maggots ... a risk I can't afford to take with my precious hybrid experiments. I'm finding that the stage where the pods just start to go leathery is a good compromise.

Meanwhile, although I'll have to wait till next season to conduct a proper trial of purple-podded peas, a packet of Ezethas Krombek Blauwschok arrived this morning from Chase Organics and I've slung a few into bog-roll tubes to see if I can grab a late crop for this year. It's already clear that this variety is not the same as the ones I've already seen; the seeds are large-ish with a distinctly brown colour and many are somewhat flattened in shape. Although it's hard to be sure the colour differences are genetic rather than just down to variations in harvesting and storage, the ones I saw at the Rococo Garden had a similar flatness but were distinctly smaller and greener, while Mr Bethell's Purple Podded has larger, rounder seeds with a yellowy-green colour. 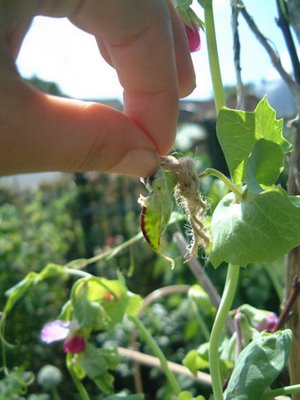 Taken a couple of weeks ago, this photo of a baby pod on Mr Bethell's Purple Podded shows how the colour starts developing just along one edge before the whole pod turns purple. This one has been hand-pollinated with Champion of England and you can see all the tiny peas inside ... the future of my breeding experiments.
Posted by Rebsie Fairholm at 12:41 am

I'm finding fascinating stuff in your blog that I never found elsewhere, even in the most advanced of books. Thank you so much!

My pleasure! I'm really glad you're finding it useful.