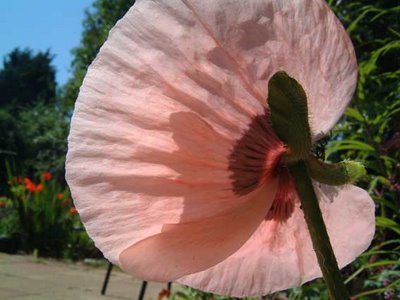 Well, my elderflower cordial was a success. Husband glugging the stuff like there's no tomorrow. I need to go and get a bucket from the homebrew shop so that I can make it in bigger quantities. I'll also need to take a trip out into the Cotswolds with the secateurs ... I don't want to pillage my own tree any further because I like elderberry beverages too and I want to leave it with enough blossom for that. There's no shortage of it around here though. Previous wildflower recces suggest that Leckhampton Hill might be a particularly good place for elder.

Of course I'm not superstitious. *cough* Not at all. It's just that I have a curious feeling of respect for elder trees and always like to ask them nicely before taking their blossom.

I love this time of year in the garden ... everything looks at its best in June, before it all goes blowsy and flops over. This picture was taken from the window of the music room, the room where all Revolving Doris's music is recorded (or my half of it, anyway). Looks nice at this time of year, doesn't it? No wonder I'm not getting much music done. 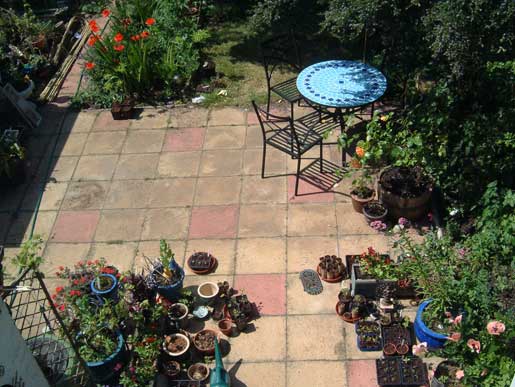 The music room is now being supplied with some especially lovely red Dianthus flowers, courtesy of the plants which I picked up on a trip to Devon a few months back. I'm usually reluctant to cut flowers because they look so lovely in the garden, but it's nice to have a jar of them on my desk too. I tend to bring in mature flowers anyway, because Dianthus is at its best when it's aging a bit. The pistils curl up into a very attractive spiral after they've been pollinated and the flowers still last for ages. 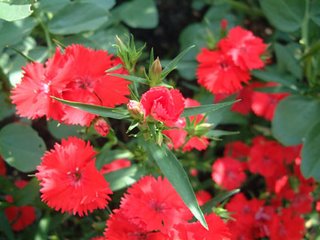 The broad beans are doing very well, and the red-flowered type now has huge numbers of tiny pods. Still a few flowers on there too. Grando Violetto began to set pods much earlier, and some of them are getting big, but it seems to produce them one at a time so there's never enough for a meal. Grrr.

The blackfly season is well underway. Even the red-flowered variety is now under attack, although interestingly it's only the largest and lushest plants which are affected. Some of the plants have stayed quite small and those are still clean as a whistle. The Grando Violetto variety is suffering quite badly and I'm having to hose them off on a daily basis. The plant tops are looking very feeble now (probably from being violently blasted with a water jet every day as much as from the blackfly) and it doesn't look like I'll be getting a huge yield from them.

Had a toad hopping about on the patio this afternoon. I've noticed an increase in their numbers over the last couple of weeks and a corresponding drop in the slimy invertebrate population. Hooray.

I dunno about you, but I like to spend a lot of time just standing around in the garden staring idly into the middle distance, especially in the twilight. Yesterday evening when I was doing this I heard a snuffling noise and a hedgehog came sauntering out of the 'cornfield' patch straight towards me. This happened once before when I was sitting on the bench in the wild garden and a hedgehog came over and started snuffling at my foot. I had my eyes closed and didn't realise it was there until it touched me and I went "waaaaah!" and leaped about three feet in the air and the hedgehog scarpered. They certainly can shift if you frighten the shite out of them. This time though I kept very still and the hedgehog passed within two feet of me, carried out a brief inspection of the broad beans and waddled off into the raspberries. Very cute. And very snuffly.
Posted by Rebsie Fairholm at 3:06 pm