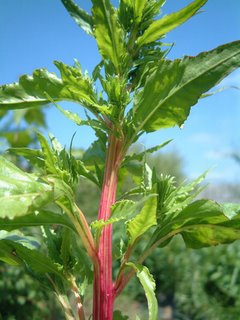 Cheltenham Green Top beetroot ... with a rather groovy flower spike

Mowed the lawn and used the cuttings as a mulch around the peas and beans. At this time of year I only apply the mulch very thinly, which means it doesn't really work as a weed suppressant but it does still keep the warmth and moisture in the soil, and allows water to penetrate. After a few days it dries out into a kind of mat of hay, rather than a compacted slimy mess, and breaks down very quickly into the soil. By reapplying it every couple of weeks I can get a lot of organic matter into the soil without having to spend weeks composting it first.

I think this is going to be a good year for fruit. The gooseberries are coming on well, as you can see. Looks like the Ashmead's Kernal apple tree couldn't be arsed to blossom this year, but Taynton Codlin produced one flower cluster and now has one solitary apple. Tewkesbury Baron, by contrast, was such a mass of blossom it looked like a funereal tribute. And now it has loads of swelling apples. But the tree is not even two years old, so for its own sake I'll have to force myself to take them off. Blub.

The damselflies are everywhere now, like miniature dragonflies but in bright red or sky blue. I've now managed to get a photo of one, which hasn't been easy because they're so thin and elongated my camera's autofocus can't pick up on them. They're also a bit camera shy and tend to fly off. They are a delight though. Tiny levitating sticks of turquoise. 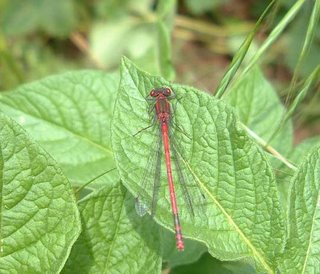 Unless I'm much mistaken this is the imaginatively named Large Red Damselfly. Seen here posing on Fortyfold potato leaves.
Posted by Rebsie Fairholm at 5:49 pm