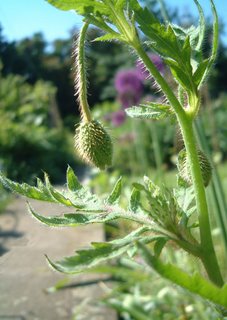 When there's a bustle in your hedgerow, as the song says, it could be a spring clean for the May Queen or it could be what at first looks like a writhing double ourobouros. In this case it wasn't quite, it was two serpentine creatures not biting their own tails but clamping their gobs round each other's midriffs in a most antisocial manner. A pair of slow worms having a dust-up.

I don't know what slow worms argue about. Maybe one was accusing the other of pinching his legs. But anyway they were coiled around each other and thrashing about, each trying to get its mouth further round the other's body. Then one scarpered, and the other rippled away through the chain link fence ... only to bump into another slow worm coming the other way. There was an awkward impasse for a while and then the first one turned round and made a sudden dash for the potato patch.

Oooh, I saw a damsel fly today. A bright red one. They are SOOOOO beautiful, I love them. It couldn't wait to get its proboscis stuck into a few valerian flowers. Yum. 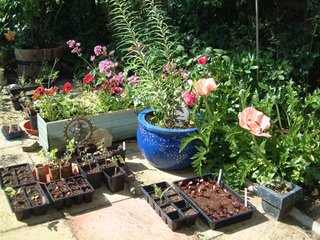 The patio tends to get cluttered up with seed trays at this time of year ...

The garden is reaching its prime now, and the poppies are about to burst open, which is always a lovely time. Because of the slug crusade there's a much smaller number of opium poppies this year ... about 500,000 seedlings came up and were promptly eaten. But the field poppies (Papaver rhoeas) and variants thereof are doing very well.

Bad news on the blackbirds though. A neighbour's cat got in there on Tuesday night and took the babies. Such a shame, because they were so close to being ready to fly.

But you've got to admire the resolve of that female bird. She spent a couple of days sitting around looking depressed but now she's busily ransacking my flowerpots for nesting material. Starting all over again.
Posted by Rebsie Fairholm at 9:39 am