Today in the garden ... orange 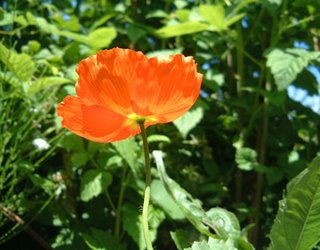 Lots of new flowers have come out today. And they're all orange. Whether they were meant to be or not. 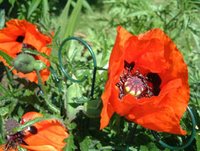 I've been nurturing the Iceland poppy from seed for two years expecting it to have red flowers. That's poppies for you ... always coming out different from what you expect. Also out today is this oriental poppy Allegro and some bright orange gazanias.

Most of my work today was in the vegetable plots. Blasting the blackfly off my Grando Violetto broad beans with a hose jet. 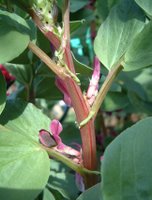 Interestingly the red-flowered broad beans are not suffering from blackfly. Just one plant, the bi-coloured black and pink one, has a minor infestation. But the others are completely clean (see photo) with not an aphid in sight. This is exactly what happened last year so I'm assuming the red-flowered bean is naturally blackfly-resistant. What a turn up for the books in a variety that's already won me over with its beauty and taste.

I planted out the Kew Blue climbing beans against wigwam canes. They are still quite small, as they've been slow growers so far, but I thought they might as well take their chances in the open ground rather than hanging about in trays on the patio.

So, what do you do when you realise you've sown far too many vegetables and you haven't got room for them all? 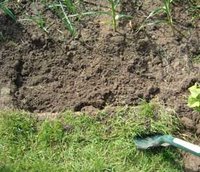 That's right. You dig up another chunk of the lawn. 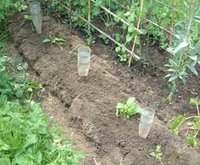 And use the strips of turf to earth up your spuds. Seen here with Witch Hill potatoes. Note hi-tech irrigation system made from sawn-off Ribena bottles.

If you angle the turfs in an inverted V-shape along the row they form a nice moisture-conserving trough, which you can then top up along the middle with fine loose soil to earth up the potato haulms. Stacking the turfs like this holds the sides of the trench together, prevents water from running off and being wasted and absorbs it into the mats of decomposing grass, which helps to keep plenty of moisture around the roots and developing spuds.

It does have a downside: it requires vigilant weeding. Some of the grass roots always regrow, especially bits of couch.
Posted by Rebsie Fairholm at 5:30 pm