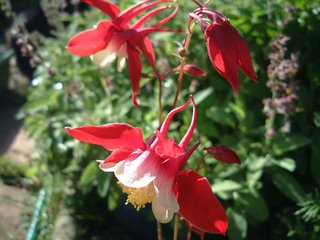 At last, I saw a toad in the garden. He was staggering awkwardly across the lawn, so hopefully he was bloated from eating all the slugs on my veg patch.

I left my spade lying on the ground while I had a break (yeah, I'm very slack like that) and when I went to pick it up I suddenly saw it had a slow worm draped over it. I managed not to startle it too much and it came sauntering right over to me to have a good look. It's the fifth one I've seen this year, although there may only be two or three different ones. This one is a shiny dark brown, just over a foot long, with black speckly markings. A beautiful looking thing. (Although I don't think my mother would think so. She'd probably run away screaming.) It had a wide black forked tongue which was darting in and out and licking the surface of the soil.

And the blackbirds on the patio have babies. I can hear them all squeaking whenever a feast of worms is delivered to the nest. I notice it's the female who does most of the work. The male just sits on his backside most of the day staring through the rose bush.

I planted out Mr Bethell's Purple-Podded peas today under a rather eccentric structure of twigs.

Also sowed some carrots in a trough. They won't have room to grow to full size, but that's OK. I planted alternating rows of Chantenay, a French variety of 1830 which has short wedge-shaped roots, and White Kuttiger, a 300-year-old Swiss variety with white roots. The soil medium is mostly coir with a few shovels of sand mixed in (and some blood fish and bone meal). It's very light so the roots should whizz through that.
Posted by Rebsie Fairholm at 10:07 pm

Greets to the webmaster of this wonderful site. Keep working. Thank you.
»