Look, the Victorians had better peas than us 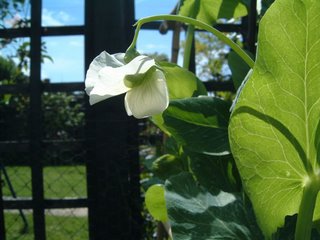 Alderman, 115 years old, produces its first flower of the season

The Victorians were big on peas and developed hundreds of new varieties, most of which have now been lost. Admittedly some of them were crap. But others have deservedly survived.

Most of the peas you get from garden centres these days grow as low bushy plants, two or three feet tall. I always thought that was the normal height for peas. But no, the shorter plants have been bred for commercial growers to make mechanical harvesting easier. And as is so often the case, the needs of commercial growers are the opposite of what you want in the garden. Old pea varieties grow to five or six feet or more, which makes more efficient use of space and puts them at a much more comfortable height to pick by hand. They crop over a longer period and ripen better than the short modern varieties because the pods are spread over a larger area. They're also damned fine looking plants.

One of the most revered peas of the Victorian era was Champion of England, of 1843 vintage, and it's been on my wish list for a couple of years. Nobody sells it on this side of the Atlantic (ironically), but I've now managed to get it from the Heritage Seed Library. I planted them up in some bog roll tubes stuffed with compost and look forward to seeing how they fare.

So far I've found Champion of England a bit erratic with germination. Some seeds are very slow indeed and they're also prone to rotting (more so than other peas). When they do show up though they're chunky and a rich green colour and branch into two stems almost immediately. They should end up growing well over 6ft.

Also from the Heritage Seed Library, Mr Bethell's Purple-Podded is an heirloom variety (i.e. a non-commercial variety preserved by individuals over several generations) from the north of England. So far I've found that germination is good, it's vigorous, and grows very tall very quickly, which is its best defence against slugs. The stems and occasionally the leaves are very lightly tinged with blood red.

And here's one I prepared earlier. Alderman is a tall pea introduced in 1891 by Laxton's, particularly suited to organic growing. Mine is just coming into flower now and looks very elegant. It grows very vigorous stems and foliage up to about 5ft and then a plethora of flowers suddenly appear from the leaf axils, from the top of the plant downwards. The flowers are white fizzled with green and very voluptuous.

It's supposed to have big fat pods of excellent flavour, so I look forward to those. 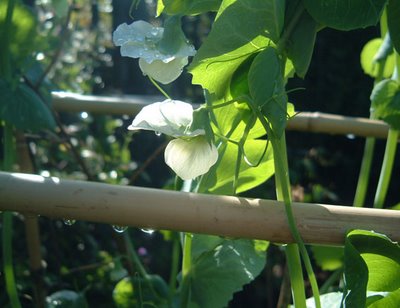 Pea 'Alderman' just after rain
Posted by Rebsie Fairholm at 12:39 am