I hate using the word 'heritage' in relation to vegetables, because it sounds so bloody smug. "My cauliflower has historic significance, don't you know." But that's the term commonly used to describe what I grow, which is old and unusual varieties. Plant breeding had something of a heyday in the Victorian period and I'm a real nerd when it comes to researching this sort of stuff.

So why am I not satisfied with all the stuff I can get from the garden centre? Well, first there's the appeal of seeking out something that's different, and which has some history behind it. Secondly there's the issue of genetic erosion ... the loss of biodiversity as the available varieties have become increasingly standardised. Thirdly, believe it or not, many old varieties are genuinely superior to the modern equivalents in flavour and disease resistance. Some are also very beautiful. 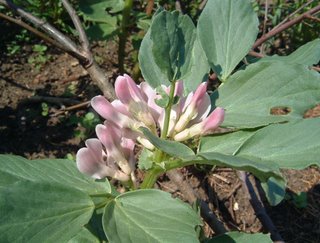 Heritage veg often shows a bit of diversity, like this Victorian crimson-flowered broad bean which has come out ... er ... pink. It's still gorgeous though.

Since the 1970s it has been illegal under EU law to sell vegetable seeds that are not on the National List. Getting vegetable varieties listed can cost thousands of pounds, so seed producers have concentrated on developing varieties for commercial production (i.e. which can be sold in large quantities) rather than for gardeners. The traits a commercial producer looks for are often the complete opposite of what you want in the garden. Size, appearance and homogeneity have been pursued at the expense of flavour. Getting a plant on the National List also requires a degree of standardisation and uniformity which is next to impossible with some heritage varieties. And is actually pretty daft anyway from an ecological point of view.

We've got so used to growing varieties designed for commercial use that we don't even realise what we're missing. Commercial growers often harvest destructively, i.e. the whole plant is ripped up and stripped of its assets by machine. The produce must mature all in one go, grow to a large size and uniform shape, and be tough enough to withstand transporting and handling. Gardeners on the other hand want plants that are space-efficient, tender, nice flavoured, and which mature gradually to give a continuous supply over a period of weeks. You don't want varieties which mature in a huge glut and have to be quickly eaten up or shoved in the freezer.

That's one reason heritage vegetables are sometimes better in the garden than modern ones. They were bred by and for gardeners. The produce is often smaller and the yields may be lower, but they more than make up for it in other ways.

Something else that's been lost as seed has become more homogenised is the concept of local vegetable varieties. It's worth seeking them out, as they usually do well because they're optimised for local growing conditions.

I don't actually like beetroot all that much but I grow a few plants of Cheltenham Green Top, which is native to the sandy soil in this area and really thrives in it. It's a 'heritage' variety which rose to prominence in 1905 but was widespread in the local area before 1889. Its top is actually two-tone green and pink, and a bit on the hairy side, but very decorative. Unlike modern rounded beetroots it grows into a long tapering root, like a carrot. 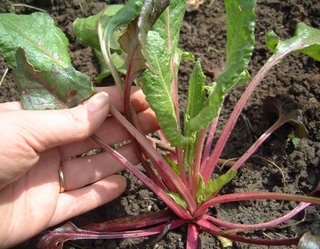 But ... I wouldn't want to give the impression that all heritage vegetables taste better than their modern counterparts ... some don't. Some vegetables which have been grown here for centuries have never really been bred and improved until modern times (asparagus and garlic, for example) in which case the modern varieties are generally superior. And it would be wrong to think of the Victorian period as an idyllic golden age of pre-chemical gardening when everything was grown in harmony with nature. On the contrary, the Victorians blithely dosed their veg with a giddy array of poisons including nicotine and cyanide.
Posted by Rebsie Fairholm at 5:57 pm