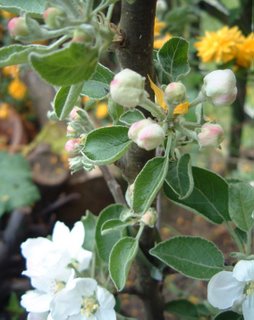 Gloucestershire is in the middle of a major apple-growing region and once had a good roster of unique varieties with names like Crackstalk, Bastard Underleaf, Kill-Boys (allegedly that's what one of its rock-hard fruits did) and Hen's Turds ... half of which are now extinct. This February I planted three baby apple trees in the garden, all local varieties. Ashmead's Kernal is over 300 years old, has sharp-tasting pale green russeted fruit and originated in Gloucester about 7 miles up the road. Also 300 years old is Taynton Codlin, an acidic cooking or cider apple from the village of Taynton a few miles north of here. It's very rare these days and not a lot is known about it. And a mere youngster at 140 years old, Tewkesbury Baron (that's pronounced "Chucksb'ry" of course, as you'll know if you read my music blog) produces dark red apples, reputedly not especially flavoursome, but we'll see, and is also extremely rare. I got them from Lodge Farm Trees, a specialist grower of Gloucestershire and/or heritage apples, and very helpful they were too. They're connected to the Gloucestershire Orchard Group, an amazing bunch of people who have rescued dozens of rare local varieties from extinction. And since the bloke clearly makes his living from supplying entire orchards, it was especially good that he was happy to sell a few single trees to individuals like me, and meticulously explained how to plant and prune them. He also made sure I chose the right ones. Apples need partners to pollinate them, and they all flower at different times, which doesn't help. Tewkesbury Baron is very early, and flowers before Ashmead's Kernal has even bothered to show any leaves. But Taynton Codlin bridges the gap between them. That's the idea, anyway.
Posted by Rebsie Fairholm at 4:36 pm