It's very trendy to have your own miniature wildflower meadow these days, and I've got my small patch set aside at the bottom of the garden for nature to do its stuff. It comprises a scruffy bit of lawn full of ribwort which was always a bugger to mow anyway because it's all lumpy-bumpy, a thick cluster of old damson, pear, elder and lilac trees, and a shady patch behind them which the previous owners used as a log store (now occupied by a luxurious crop of nettles). Which is perfect, because it's got three habitats in one: a sunny meadow, something resembling a hedgerow, and a shady woodland edge, all of which should support different species of wildflower.

This year I'm expanding the range of habitats even further, donating an adjacent chunk of garden for a 'soggy patch' (can't really give it the glamorous title of bog garden, it ain't exotic or squishy enough) and digging over a small strip of the meadow to make a tiny cornfield. Because the soil here is so dry it's difficult for me to grow any of the native wildflowers that thrive in British sogginess. I'm hoping that by digging out a bed and lining it at the bottom with a lightly perforated polythene sheet, I might just slow down the drainage enough for some of them to thrive. The bed is laid out with a border of large logs (the last relics of the previous owners' firewood stash) which are untreated, so they'll gradually dissolve into the garden and provide a nice habitat for interesting fungus. The cornfield bit will be sown with wheat or barley and should provide a home for those plants which prefer richer soil and don't thrive in grass, like poppies and cornflowers.

It's a bit ambitious to have five contrasting habitats in an area about 20ft square, but what the hell. 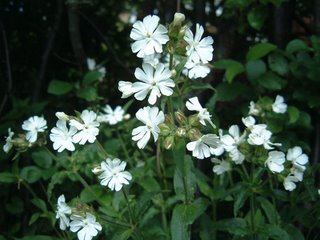 Most interesting of all, I have a mauve-flowered scarlet pimpernel. I found two of them growing in the lawn when we moved here, and avoided mowing them. I collected some seeds and let the rest self-sow. The following year there were quite a few of them ... so they may be coming true from seed. That'd be nice.

Having set aside my meadow, I have to go about sowing it with something more interesting than ribwort. I like the idea of making it a microcosm of the surrounding area by growing species native to Gloucestershire. So rather than buying a commercial seed mix I've been collecting seeds locally, which means I'm only growing plants that belong around here, and helping to preserve any local variants into the bargain. I hasten to add I'm meticulously careful about what I collect and where from, because plundering stuff from the wild to stock your own garden is not generally something to be encouraged. I only collect from good sized colonies and only take as many seeds (not plants) as I need to propagate a handful ... because I can build up my own stock over successive years. Anything that's rare or delicate I don't touch. They're collected from various places in the immediate vicinity of Cheltenham, the main sources being the disused Honeybourne railway line and the crescent of hills surrounding the town. Some of the seeds are sown in plugs of sterile compost, labelled, and cultivated like garden plants (most respond well to it, as long as the compost is low in nutrients). The rest are chucked straight into the meadow and given a good trampling.

Not bad, I reckon.
Posted by Rebsie Fairholm at 9:35 pm