Funnily enough, just as I was writing up the results of this year's successful sweetcorn endeavours I was leafing through the 1849 volume of the Illustrated London News (as you do) and came across some discourse about maize corn in England. The growing of any kind of maize (let alone sweetcorn) in the UK was still a pretty novel idea at the time, with only a handful of people having experimented with it, mostly with a view to using it as cattle fodder or as a cheaper alternative to other grains. The general opinion at the time was that the UK climate was too cold for maize and it would fail to ripen.

In September 1849 the ILN reported that an experimental hybrid maize crop was being grown in St James' Park in London, to establish whether this crop really was possible to cultivate in England. The trial site was an unfavourable spot surrounded by trees and shrubs "in the heart of the metropolis" and no manure had been used. Two other varieties were also trialled with it, an American maize and one from 'The Barbadoes'.

The immediate result of the trial was a disagreement among the ILN's readers: 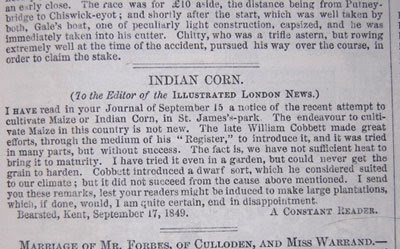 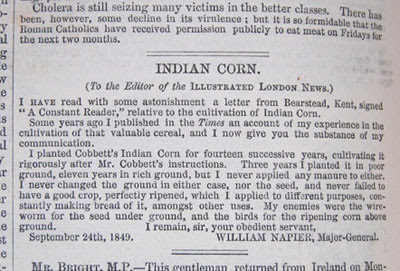 As it turned out, the experimental maize thrived. The 'Barbadoes' and American corns apparently failed to reach maturity, but the "hybrid maize" (pictured above) did well:

"On Wednesday, the Maize introduced into this country from the Pyrenees, and sown as an experiment in St. James's Park, by Mr Keene, was harvested. It has fully succeeded. The grain is perfectly formed, full and ripe: the cobs are much finer than those grown on the Continent; a result – peculiarly gratifying in a public point of view – of very high importance; because it sets at rest the doubts which, in the first instance, were entertained in some quarters, that the soil and climate of this country were not capable of the product."
Posted by Rebsie Fairholm at 10:48 pm

Very interesting post Rebsie, I often have questions from English Gardeners about my corn and weather or not it can be grown in England, many seem to think it won't ripen and the only thing I really know to say is that you will never know unless you try.

What does the ILN (or you) mean by "hybrid" in this context, I wonder?

Alan - it's a strange thing, sweetcorn in the UK. I had a friend who lived a quarter of a mile up the road, a competent gardener, who reckoned she could never get it to ripen. But it usually does well for me. Always worth a try, as you say!

Jeremy - that's a good question. It's called "hybrid maize" in the headline but there's no explanation. Likewise the "American corn" is a bit on the vague side. There are engravings of all three types, but they all look like weedy and straggly specimens compared to what we're used to today.

Enjoyed reading your review of Major Cooks Bean. I am growing this as a seed guardian for HSL so I am very pleased to get any info on it. Sound like a good bean. Growing strongly.

I like your comments on plant breeding. I have been breeding my own variety of runner bean. We have very dry conditions and I found only a few beans did well. So I started saving the seeds from the plants that produced well. What surprised me was how quickly I seemed to get beans that produced well in the dry conditions. I have called it intelligent genetics. Because I am convinced that the conditions in which the beans are grown affect the next generation.

I am really impressed by the vigour of the plants I have got from the HSL and the pest resistance.

Can plants grow without soil said...