Aaaargh, what a summer 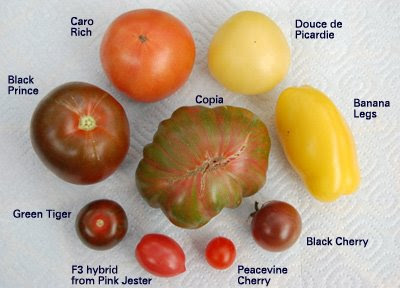 Tomato diversity ... these beauties were mostly grown in my newly-acquired greenhouse, which has given them some temporary respite from the blight

My apologies to regular readers for an unplanned two month hiatus from blogging. We've been having a horrible couple of months, and it's taken its toll on my health to the extent that I haven't been able to keep up with things. I have a huge stack of unanswered emails and comments and queries, for which I apologise. I seem to be exhausted all the time at the moment and having trouble just getting through the day, so everything else has had to go by the wayside.

The garden has also been neglected and is an overgrown muddle beyond redemption (I may as well leave it to its own devices now and dig it in over winter). I have been taking some notes and photographs where possible, so until I'm ready to resume normal service I'll be posting up a few photo galleries. I'll also try to get stuck into the Heritage Vegetable Reviews as soon as I can.

The main event, as you can see below, is that the ginger peril has broken his leg. 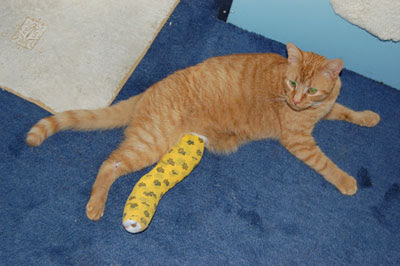 We don't know what happened. The vet thinks he probably got hit by a car and the wheel went over his leg. He was missing for a week and we thought we'd lost him. Then I found him at the bottom of the garden, in a pretty dire state. The X-rays showed his leg was too badly damaged for our local vet to deal with, so we had to take him to Bristol University's animal hospital in Somerset, where a specialist surgeon put it all back together with screws and wires. Since then he's been confined to a small cage, which he's not too pleased about. As you can imagine, all this specialist care has not been cheap ... two thousand pounds and counting. (And no, we're not insured.)

There's also no guarantee that the surgery will have fixed the problem. He's walking quite happily on the leg with a splinted bandage on it, but we're anxiously waiting for him to heal enough for the bandage to be taken off, so that we can find out if he can walk without it.

On top of that I found myself the focus of a hate campaign by an internet troll. Nothing to do with gardening, it was on one of the music sites I use. A woman from Manchester with a personality disorder and nothing better to do. I tried not to take it personally because she was clearly completely off her trolley, but it was still pretty stressful to deal with. Fortunately it seems to be resolved now, although she's since been making trouble for others on another site. *Sigh.*

So gardening has taken a back seat over the summer, but it wouldn't have been much fun anyway with the non-stop pelting rain. I feel most sorry for the farmers who face losing their crops for the second year running ... at least in a garden there's enough diversity that some things will always thrive whatever the weather. Tomato blight is the most depressing of the failures, and for the second year running I've lost 100% of my outdoor tomato crop ... not a single fruit managed to reach maturity. Last year the blight hit very early - in June - and nothing stood a chance. This year it came quite a few weeks later, and things might have been all right if it hadn't been for the soaking wet weather. Blight spreads so rapidly in warm moist conditions, and it very quickly took hold. A lack of sunlight slowed the ripening of the tomatoes, with devastating consequences.

All is not lost though, because I have a greenhouse for the first time this year. The greenhouse tomatoes have been struck by blight too, but it has spread more slowly, and as the fruits matured much quicker than the outdoor ones I've been able to salvage enough to make them worth growing. I also managed to get a couple of unblighted fruits off plants in pots on the patio.

Raspberries have done exceptionally well, using the extreme wet to swell their fruits to a larger size than I've ever seen them. But the most surprising success story for this year is the Red Miracle non-hybrid sweetcorn kindly sent to me by Graham in South Wales. It's an American variety bred by Dr Alan Kapuler, and I wasn't even sure it would cope with the climate here in a good year, let alone a miserable wet summer with no sunlight. But it's been fantastic. Two cobs on each plant, exquisitely sweet and tasty, and a beautiful, beautiful deep red colour with pink silks! 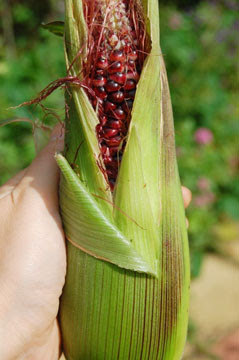 And one positive thing that's changed since I last blogged ... I've often complained that Blogger treats Mac users as second-rate citizens and many of its functions don't work properly in Safari. Well, I upgraded to a newer version of Safari and now some of them do work. So now, for the first time, I can put things in bold or italic by clicking a button instead of typing all the HTML codes in manually. Wowsa! Whatever miraculous innovation will they unleash next?
Posted by Rebsie Fairholm at 4:06 pm

Glad to see you back Rebsie, I've missed your posts! Sounds like you've had a tough time of late. Hopefully things can only get better from here on in!

Hi Rebsie - you've certainly had a tough time - and the garden and ginger companion too (I hope he makes a satisfactory recovery after all the TLC and vet bills!!!). My garden is a complete overgrown jungle too, and as I can only do 'gardening-lite' for a few more months (consultant's and OH's strict orders), it will have to stay that way until spring!

PS: the studio assistants send their cyber hugs to your ginger one.

Glad to have you back :) That sweetcorn looks gorgeous!

Nice to see you back!

Sorry you and your cat have both been having a hard time.

Hi Rebsie, I came to you via Mrs Flummery (Veg Heaven)and apologise that I have always been something of a voyeur in the past and not left a comment. So sorry to hear of the trials and tribulations of the last couple of months. I hope life can move forward for you now and that you too feel better soon. Give the Ginger Peril a hug from us, I'd love to have cats again but the Canine Management at Bag End will not permit such behaviour. all the best, Bilbo.

Hello and welcome back to blogland! What a summer indeed. Sounds like you are exhausted - look after yourself.

Welcome back! I've lost all my tomatoes to blight as well. I did manage a few early ones, but all my beautiful beefsteaks are gone. Hope you get back to normal soon! I find that turning the compost heap blows out the cobwebs! xx

Sorry to hear about the cat! Does look cute with the bandage though.

And there you go again, making me jealous with the red vegetables...

My sweetcorn hasn't done well. There are a few ears but very small - there just hasn't been enough sun I guess.

Most of my greenhouse tomatoes haven't ripened yet, again I'm blaming weeks and weeks of rain and no sun.

Strangely my outdoor tomatoes are okay at the moment. Not at all ripe though, and not many fruits. I'm expecting blight any time though.

Sooo glad you're back. Life wins over garden boggles anytime. Take care of yourself, we're rooting for you!

That sweetcorn looks great, is it available to buy anywhere?

So glad to have you back. I have missed reading about your beautiful vegetables. Sorry you have been having such a rotten time with one thing and the other. We all love you, even if mad trolls out there don't. But then, they're mad!
You add a little quirky interest to lots of peoples lives. Looking forward to more!

Hi,
I´m so happy to find your blog and to read about your experiments. Thanks to you I found the REal seed company, the have very interesting comments and also Forellenschluss, my favaourit lettuce. I´m a Swedish kitchen gardener and a writer of gardening books, mostly about kitchen gardening . I grow lots of heirlooms and read your Heritage Vegetable Reviews with great interest, have tried most of them myself. Do you know if there is a Carouby pea that´s small, about 50-70 cm. Weibulls, which is the biggest seed company in Sweden, introduce them 2009 and I wonder if they might know something that I didnt´know.

How is it going with your red peas? Hope your dear cat has recovered.
lena in Stockholm