More French beans than you can shake a stick at 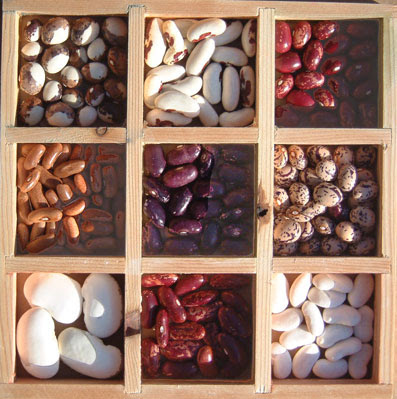 Beans are a joyous thing to grow. They make such a big fanfare when they emerge from the ground. Huge fat fleshy cotyledons which don't look like leaves at all. And then a slightly prehistoric appearance as the true leaves unfold from inside. You can't miss 'em. And neither can the slugs, unfortunately.

I'm having serious problems with the slugs at the moment, as a lot of other Brits probably are. We've had a lot of alternating heavy rain and bright sunshine, which has brought the plants (and weeds) on a treat. Lots of fresh new growth = gastropod party time. After a drawn-out and very dry spring season, a dousing of rain has suddenly brought them all out of hibernation and they are hungry. All my breeding projects are under assault. Ulluco, razed at ground level every time a shoot emerges. I've lost my entire crop of onions, which included some rare and hard-to-get varieties, and it's too late to start again. Nurtured since January, wiped out in a single night.

Young bean plants are very vulnerable when first planted out. Some snails like to work their way up the stem stripping off the outer layer, and then pointlessly chomp through a leaf stalk so the whole leaf falls off. Other times the slimy little sods don't bother with all that and just shin up the bamboo cane to mangle the leaves directly.

I've been planting out loads of beans this week and I'm doing my best to keep them alive. I have had to sow a few replacements, but hopefully if we have a few days of dry weather the survivors will get properly established and the slugs will cease to bother them. I've collected rather more beans than I've got room to grow but I'm managing to find space for most of them, and the rest can wait till next year. 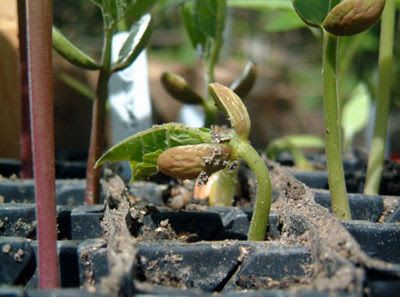 French beans in Rootrainers. The emerging seedling is Poletschka (thanks Celia) which grows from amazingly beautiful indigo-black glossy seeds ... and the pink stems beside it belong to Jo's Purple Podded, an ongoing breeding project distributed by the Irish Seed Savers Association.

Most of the varieties I'm growing are climbers. I don't grow very many dwarf beans because of the slug problem ... the low-slung pods are easy pickings for them. I also find the yields very poor for the amount of space they take up and they often give back barely a handful more beans than I sowed to start with. But there are some interesting varieties which don't have any equivalent among the climbing types, so I make an exception for those.

Two new dwarfs I'm trying this year are Black Valentine, a variety from the 1850s with small but pretty black kidney beans, and Comtesse de Chambord with even smaller shiny white beans. Indeed Comtesse de Chambord is something very different, as it's what's known as a rice bean ... the white beans are tiny enough and elongated enough to look a bit like rice grains (pudding rice, anyway). Actually they aren't quite that small but they're pretty tiny as beans go. They're reputed to have an excellent flavour but they're not grown commercially because their tiny size and delicate plants make them uneconomic. So if you want them you have to grow your own. I got my seeds from Association Kokopelli. 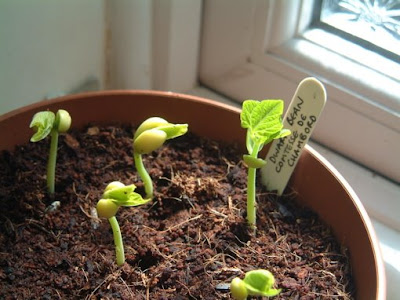 Newly emerged seedlings of Comtesse de Chambord, which look a bit like little bug-eyed monsters while they still have their yellow cotyledons. They grow into small, delicate plants of a very bright green and the pods can be used for green beans or left for shelling.

By way of contrast, these are the emerging seedlings of a supersize Australian climbing variety called Purple Giant. This one is mainly grown for its purple pods and the seeds are flat and fairly small. With the weather being so clement they've grown rapidly in the last few days but I can't plant them out yet because I don't have any tall enough poles. I can only buy bamboo canes of a maximum of 7ft because anything bigger than that won't fit in my car. I'm having to borrow some extra-long poles from my neighbour. He has a bigger car. 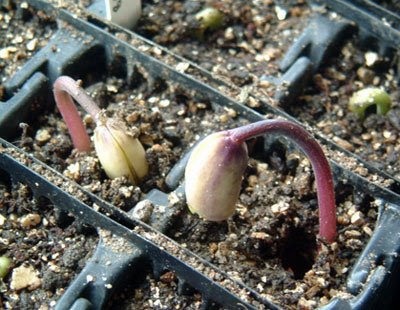 Purple Giant emerges. The one on the right is more strongly purple than all its siblings, though otherwise it looks true to type.

I'm always on the lookout for natural variations and mutations in beans, because breeding them the same way I do peas is not convenient ... the anatomy of the flowers makes them incredibly difficult to hand-pollinate. However, some of the most dramatic variations are no use for breeding because they're not genetic.

That includes the curious phenomenon of occasional bean colour reversal, or "day for night" to give it a more romantic name, where (for example) a batch of tan beans with purple markings has the occasional purple bean with tan markings. Many heirloom varieties seem to display this trait. Last year I picked out all the "day for night" beans from a batch of Mrs Fortune's and sowed them separately. The result was exactly the same as if I'd sown any normal Mrs Fortune's beans, i.e. the usual colour and a few with reversed colours. Afterwards I spoke to a couple of other bloggers who had had the same experience, picking out the reversed beans from other varieties only to find they grew into the same plants regardless. So something other than genes much be responsible for the colour reversal, but what? Moisture levels inside the pods and exposure to light and air during harvest might be factors, but in all honesty I've no idea. 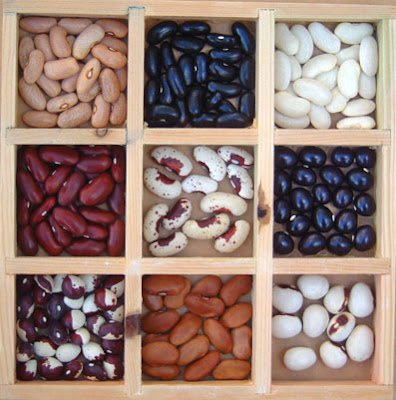 I too am growing San Antonio - they are really curious looking beans aren't they?

I'm also growing - Kew Blue (which we swapped), Kentucky Wonder Wax, Veitch's, Dragon's Tongue, Mrs Fortune's - in fact so many I can't remember them all!

Thanks Barkingdog ... yes the San Antonio are very unusual and I'm hoping they'll taste as good as they look. I've also got some of your Blue and White on the go, which is growing very vigorously.

Catofstripes ... thanks, but nope, that's definitely Jo's Purple Podded in the top left box. So you think Lazy Housewife should look more like this, tan rather than white? I'll have to look into it ...

All the Lazy Housewife I grew were tan... OTOH I got the seed via the Heritage Library, perhaps they were marked up wrongly. I will also investigate and in the meantime I've deleted my original comment so that others don't get confused.

I never considered growing beans before, but now...
Thank you for the beautiful pictures!

Beautiful, beautiful beans. I'm growing 5 varieties, which I thought was a lot for my little plot, but I'm jealous of your bean diversity. I can't wait to hear the perks of each variety. The Jo's Purple Pod seeds look similar to the my Blue Coco seeds, except my seeds may have been a little less long and slightly darker. Isn't it fun to look at the seeds and imagine how they'll grow?

It may be a little late for this year, but have you tried bran against the slugs? I used to buy a big bag -- it's pretty lightweight -- of the stuff they sell for horses and sprinkle a thick band around beans and other seedlings. Generally worked for me.

I love the way you have photographed the beans in boxes! almost good enough to eat!

The photos are great and beans love beautiful. Wish I could grow them here in Dubai with its desert clime.

luckily my runner and dwarf beans were fairly advanced before I planted them out and they're in containers and I'm hoping for the best! will be keeping a watchful eye.

thanks for the tip about the peas.. I had a look and there ARE very subtle red splodges just at the join between the leaf and stem on one or two of them (how cool!)

sorry about your onions, Rebsie

Great beans, Rebsie. I'm gutted because mine have done so badly this year: I got only 20% germination (Purple Queen), and of those about one in 5 emerged without leaves. Which is VERY irritating...

Found your blog through Hedgewitch - love it! Do you mind if I put a link to yours on my blog?

Smails and slugs - what do you do with them, eh? I've considered getting a duck or two, as they enjoy eating them. I often use rice hulls on my garden and that deters them a little - the rice hulls stick to their bellies and are a bit sharp - they don't like it. The other thing you could try is sawdust. Good luck!

lol ... I googled "Changes in protein patterns of french and runner beans during and after bean rust infection " ... and your site popped up "amongst many" ... must admit you are better looking than beans of any description ... not to mention rust

Canadian with about 60 heritage varieties in my bean collection. Love growing beans and have recently discovered the advantages of the pole varieties. Very interested in your rice bean, will watch to see how it does for you, would love a few seeds. Could not find it on Kokopelli. I grew Black Valentine last year, very impressive. The beans are like the climber, Cherokee Trail of Tears.

My Dwarf-Beans were repeatedly obliterated by slugs/snails, and I tried all the well-known methods (copper-bands, sharp-grit, spiky bramble cuttings &c) with no success, there were slug/snail-trails going straight across them to my plants.

Then I sprinkled some out of date coffee grounds all around the next sowing - SUCCESS! They don't like coffee! Tell everyone!