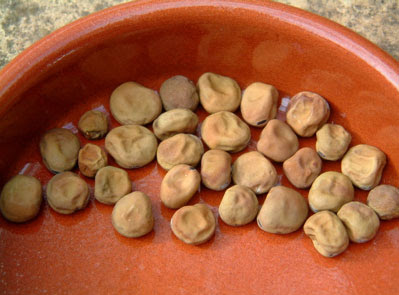 A really unusual pea ... Irish Preans, which is possibly a cross-species hybrid

This year I've volunteered as a Seed Guardian for the Heritage Seed Library. I've been meaning to do it for a while, but wanted to do some informal seed swapping for a couple of years first to make sure people were happy with the seeds I produced and I wasn't getting any unexpected cross-pollination problems. The Heritage Seed Library grow a lot of their own seed to distribute to members but they're also hugely reliant on volunteers to grow seed on their behalf.

It's a pretty straightforward process to become a Seed Guardian. You write to HSL and tell them you want to volunteer. They send you a set of instructions for saving seed for various types of plant. And then in March they send you their list of "orphans". You can choose up to three varieties to become a guardian for ... this year's orphan list has 12 beans, 8 peas and 10 tomatoes. And they do let you choose which ones you want to look after (on a first-come first served basis), which is nice, and send you descriptions for each variety so you can make an informed choice. Some of the varieties are things already available in the HSL catalogue, others are new acquisitions or things which haven't been listed for a few years.

There is a sense of responsibility in taking on a guardianship role ... and it is important to ensure the purity of the seed you send back to them. But it's not the end of the world if you have a crop failure, they keep spare stock of everything. Neither do you have to commit yourself to producing vast quantities ... and you are allowed to eat some of it. They welcome feedback on the flavour and cooking qualities.

Here are my three charges. Irish Preans in the top photo is thought to be a hybrid between a pea and a broad bean. I didn't know such a thing was possible, but I don't see why not. They're different species, but they are distantly related and wide crosses like this are sometimes possible. This one was developed at an unnamed crop research institute in Ireland. The seeds are larger than most peas and are dark olive green and slightly oval, so they do look a bit like tiny broad beans ... at least they resemble some of the older, smaller types of broad bean, and unlike most peas they have a black hilum. Very curious. 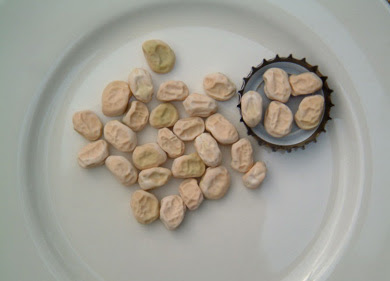 Very wrinkly and slightly elongated ... the seeds of Gravedigger

I've also taken on a pea called Gravedigger. That's probably not its real name, if indeed it ever had one, but it came to the Heritage Seed Library from someone who got it from a retired farmer who in turn had got it from a gravedigger. In the absence of any other provenance, HSL varieties often get named after either the person who donated them or the earliest known person they can be traced back to. So there you go.

Finally, I have a climbing French bean called Major Cook's Bean. This one has never been available commercially, it's an heirloom which was originally bred by a First World War officer. I've got a strong connection with WW1, having written a play and a novel about it, so I couldn't pass up the opportunity to grow this. Major Cook worked for the Commonwealth War Graves Commission after the war and gave the bean to a colleague, whose family have diligently kept it going since 1920. Amazing really.

So hopefully these three varieties will be listed in the HSL catalogue for 2009 ... 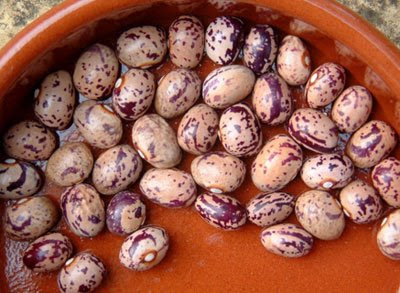 Thank you for sharing the stories of these Heritage beans and peas. I find them fascinating and give thanks for those who kept them going for us all or who, like you, continue to do so.
The Major Cook's beans are beautiful. Good luck with this project. It will be a joy to watch progress.
Deborah

How exciting! I've been tempted to volunteer - but like you decided to save my own seed and do some seed swaps first.

How cool :) It'll be interesting to watch their progress...

Well done on the music too, BBC 6 is cool!

We are also seed guardians of the gravedigger pea. We also chose red and white and madiera maroon beans.

That's fascinating! How far apart from other varieties do you have to grow plants so they don't get cross pollinated? Surely bees can fly for miles?

David, it'll be interesting to see how your Gravedigger gets on. I was tempted by Red and White and Madeira Maroon too, but felt I ought to prioritise the peas.

Matron, it all depends on what kind of plant you're growing, as pollination varies hugely. Some vegetables aren't pollinated by bees at all. Peas, beans and tomatoes are designed to self-pollinate ... they don't really attract bees and the flowers are enclosed anyway so the bees can't get in. Therefore you can grow them quite close together without any problems. With peas it's really just a case of giving them enough space that they don't get physically muddled up. Other veg like runner beans and broad beans do attract bees and will readily get cross-pollinated unless you separate them. Worse still are wind-pollinated veg like sweetcorn and beetroot, which can be cross-pollinated over distances of a mile or more.

This is one reason peas and beans are my main passion, because I can grow lots of varieties in the garden at the same time without worrying too much about crossing.

Having said that, I'm being careful with the Irish Preans. It's listed as a pea and so I assume it has pea-type flowers (i.e. sealed and bee-proof) but I'm going to err on the side of caution and keep it a little distance away from other legumes until I know more about how it pollinates.

We've been seed saving on and off for the past four years, but find the damp Scottish weather is not really conducive to drying most seeds. Brassicas are a notable exception, along with barley and oats. It's hardly surprising that kale and oats were once staples up here.

I'm a member of the HSL by the way, so it's interesting to finally come across one of the Seed Guardians.

Have you grown any of the raisin capucijners? Someone sent me seed of Kool's Langstro Rosyn, and it looks very much like Irish Prean seed except that it's a reddish brown colour.I'll grow both out this year and see if the resemblance goes any further.