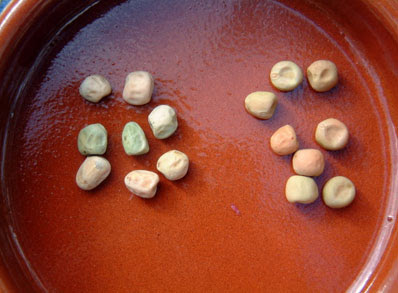 I'm sure sooner or later someone is going to refer me for psychiatric help for the amount of time I spend staring at peas, but I'm irresistably fascinated by the speed with which they germinate. Usually on or around the third day after sowing, the first pale noodle starts showing through the soil and within hours there are suddenly lots of them. I have to keep going back and counting them several times a day to see if any more have germinated. They start off almost yellow, and green themselves up very rapidly with exposure to light. If the variety has the gene for anthocyanin production (whether it's purple pods or just a leaf axil splodge) it will generally have a rosy blush on it by the time it's a day or two old. Some seedlings go quite a deep red, on others you can barely see it.

I've been spending an indecent amount of time gawping at two sets of Rootrainers. The first set contains the F2 seedlings of my original purple pea project Mr Bethell's Purple Podded x Alderman, which I won't discuss in any detail here because it really needs its own post. The second has the two varieties I'm growing for the Heritage Seed Library, plus a few very special seedlings which I'm very excited to have. In my post about my yellow sugarsnap project I mentioned that the only existing yellow sugar pea I know of is Opal Creek, bred by the legendary Alan Kapuler, a molecular biologist turned public domain plant breeder based in Oregon USA, who has devoted his life to breeding wonderful new varieties for the public good rather than commercial profit. (Needless to say he's a hero as far as I'm concerned.) But Opal Creek along with many of Alan's other creations is extremely hard to find, especially in Europe. I'd never even seen it, although I've avidly read about its creation in Carol Deppe's plant breeding book. Well, now I have it, along with an equally exciting purple-podded sugar pea called Sugar Magnolia also bred by Dr Kapuler, and I have to thank the kindness and generosity of Graham in South Wales for sending me these very hard to get varieties. 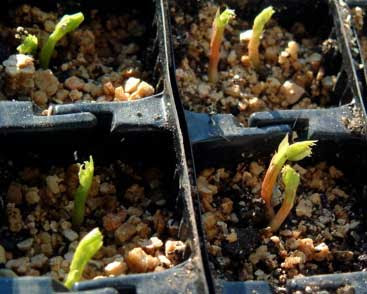 Opal Creek was bred from a cross between the yellow heirloom Golden Sweet and the patented commercial variety Sugar Snap, as part of Alan's mission to reclaim the genes from patented varieties. What I'm doing is very similar, crossing Golden Sweet with another commercial variety, Sugar Ann. Although Sugar Snap and Sugar Ann are both sugarpod varieties and share certain genes they're quite different in many other ways, so I don't expect to get the same results as Alan did. But now I shall be able to grow Opal Creek alongside my own yellow sugarsnap project and see the similarities and differences, which is brilliant.

Now, Sugar Magnolia is a treat. Only a few days after germination it already looks unique. The seedlings have rosy red stems all over (usually a rose-blushed stem will go more rosy on the parts which get the most light exposure, but this variety is a consistent colour all over). The leaves are bright emerald green, which makes a very attractive contrast. What also makes them distinctive is their very prominent tendrils. While most pea seedlings will have a single tiny tendril, often tucked against the leaves and barely visible, Sugar Magnolia has a quirky little tuft of six or eight feelers sticking out of its top like an alien head. 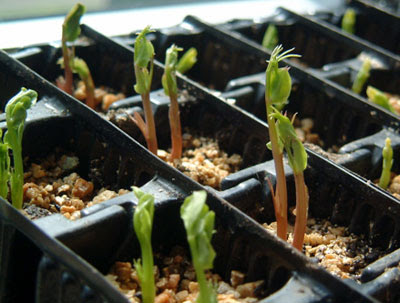 These are the same seedlings 24 hours later, at three days old

I don't know that much about what Sugar Magnolia will grow into, but it's a purple sugar-pod, which is something I've never actually seen. I will be very curious to see what the pods look like, although I won't get much chance to taste it this year because I need to grow this crop mainly for seed. It's also reputed to grow up to 10ft tall, which is taller than any other pea I've ever grown.
Posted by Rebsie Fairholm at 4:00 pm

"I'm sure sooner or later someone is going to refer me for psychiatric help for the amount of time I spend staring at peas" - on the contrary, staring at peas should be available on prescription! (I'm often to be found admiring the little hook-shaped shoots of tomatoes and wondering at how perfect and straight they are a day later).
The ease and speed of legumes is very satisfying though - having said that I've just noticed my last parsley pea (sown 9/10 March) has germinated, long after its cousins in the same roottrainers.

I look forward to seeing these in flower and "fruit" - do you plant out the two plants in each cell? It hadn't even occurred to me to put two seeds in each and yet I can't think why not!

It is all about instant gratification

They look really exciting Rebsie - I'll make sure I keep checking back in see see their progress!

Thanks for the comments!

Miss Fuggles - yes I do plant them out with two per cell. The instructions on the Rootrainer packaging suggests only one seed per cell but I've always done two and had good results from it. Peas are very sociable plants and enjoy clinging on to each other as they grow, so having two plants really close together is no problem. However when I plant them out I leave enough space between the pairs to allow them to spread out a bit.

It's funny how peas sometimes germinate really late - I have the same thing. Most of the seeds germinate all in a bunch within 48 hours and then the remaining ones suddenly show up three weeks later!

I wish my peas looked so healthy - the weather turned cold at the wrong moment & I think they may have rotted :o(
Glad I hadn't risked my HSL ones yet, just some boring Hurst Greenshaft!
I've read your blog a few times, I really enjoy it! (You also have a strange resemblance to my sister-in-law, though that's probably irrelevant to everyone but me :D)

Thanks very much for the reply about the two-seedlings-to-a-cell..kicking myself for not thinking to try it before but I shall certainly experiment now, I think you're right about the support.

Wow, this is a bit serendipitous. I spent the past summer in Corvallis, OR; part of which I worked with Alan (Mushroom) Kapuler and the Peace Seeds and Seedlings family. Wonderfully delightful people! I also took a liking to these two pea varieties and helped make crosses between them. I am doing the same thing this year in Arizona to test 'Opal Creek's purported heat tolerance. Can't wait to see what the season brings!

I have seedlings of some sort growing up out of my front bed. I have a sinking suspicion that they're magnolia seedlings. If I took a picture of them could you verify if I'm correct? I'm Corduroymagician@gmail.com

I'm afraid I don't think I can be of any help. I know nothing about what magnolia seedlings might look like, as my gardening experience is limited to vegetables (this post is about a variety of pea).