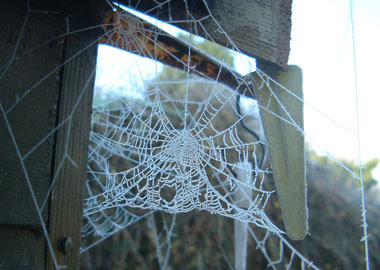 Clear skies in February have two useful effects for me. Bright intense much-needed sunlight for bringing on my pepper seedlings indoors, and frosty photo opportunities in the garden. 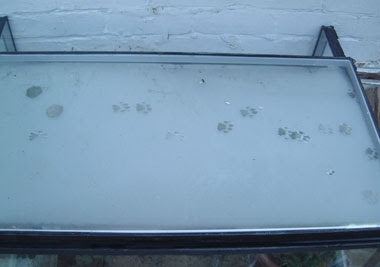 My home-made coldframe against the back wall of the house. Bloody cat! 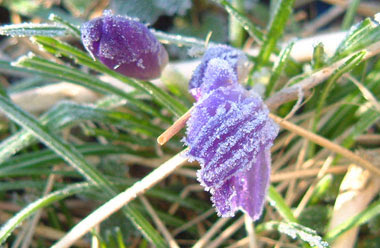 There go the crocuses. D'oh! 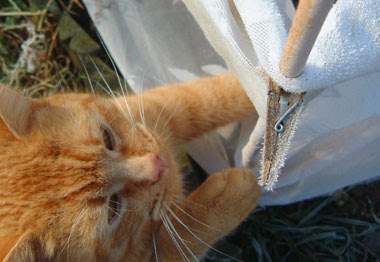 It's been about three weeks since I started sowing peppers, and most of them are up now. Some of them aren't, but those were old seeds of dubious viability. If you're wondering why I'm sowing old and dubious seeds, they're rare and hard-to-find varieties which were being given away by Association Kokopelli, so there's nothing to lose by trying them. Not much luck so far unfortunately, but they can be very slow to germinate so I'm not giving up on them just yet. Another "nothing-to-lose" experiment is the sowing of seeds from supermarket-bought peppers. I don't like just throwing away the seeds, especially from fruits that taste good. There is a risk of them being F1 hybrids or simply unsuitable for the UK climate, but I'm greatly encouraged by the success David at Evington Hilltop Adventures had last year from an experimental sowing of Tesco's Finest red pointy peppers.

Among the sweet pepper varieties already romping away are Corno Giallo from Franchi, Lipstick, Kaibi Round, Napia and Orange Bell from Real Seeds, and Pimento Perfection from Association Kokopelli. I'm also growing a few chilli peppers, Lemon Drop and Pretty in Purple from Real Seeds and Bulgarian Carrot from Nicky's Seeds. I love chillis (I like to cut up a fresh one and put it in a cheese sandwich then sit there going "aaaaaaargh!" as the endorphins explode around my brain) but I can't handle them too hot and my husband won't eat them at all, so there's no point growing too many however tempting they are. 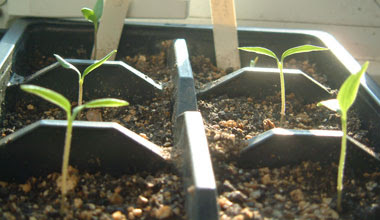 The recommended way to start off peppers is in a heated propagator, since they germinate most efficiently in warm soil. However, I haven't got one. But I do have two decent windowsills with radiators underneath them, so I sow the peppers in modules, stick a polythene bag over them and dangle them in a tray over the radiator, turning them periodically so that both sides of the tray get a fair spell of dangling. It's a bit of a fudge but it gives me good germination within 12-16 days or so. And the unusually clear and bright weather we've been having, with several consecutive days of strong sunlight, has brought them on a treat this year. One of the windowsills is east-facing and the other west-facing, so to get the best out of it I move the pepper trays from one to the other each day as the sun moves over the house.

The crucial thing about growing peppers in the UK is to start them off early. February to early March is ideal. You can also improve your chances of a decent crop by choosing early-maturing varieties. One advantage of buying seed from Real Seeds is that they have diligently tried out a huge range of peppers and only sell the ones which consistently do well in the UK climate.

Among my pepper seedlings this year I have one of nature's little oddities ... a seedling with three cotyledons instead of the usual two. It's a phenomenon I've often come across in tomatoes too. Does anybody know why this happens? I've just been reading up on it and there's a suggestion that it's a genetic variation, possibly caused by a recessive gene with incomplete penetrance (i.e. which doesn't always express itself). Usually (in my experience) when the next set of leaves appear they revert to the two-leaf arrangement and grow normally. 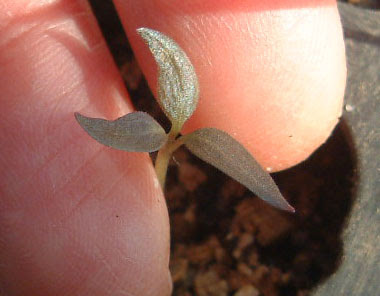 Tricotyledonous mutation: three seed leaves instead of two on one of my Pretty in Purple chilli seedlings. The dark colouring in the leaves is normal for this variety.

Another seedling issue which peppers and tomatoes both share, presumably because they both emerge from the soil in the same way (in the form of a loop which straightens itself out) is that the seedling sometimes emerges with the seed case still stuck on its head. Normally the seed case stays in the soil, but if the seedling doesn't free itself quickly enough the seed case dries out with exposure to the air and becomes very firmly stuck. Left to its own devices the seedling will either struggle its own way out or die. If you have lots of seed you can just discard any that do this, but if you're sentimental like me and want to help the seedling free itself, the solution is a used tea-bag. After making a nice cuppa, squeeze the tea-bag over the seedling to get a few drops of tea onto the seed case. Then leave it, and repeat as necessary to keep it moist until the plant frees itself. The tannin in the tea is thought to soften the seed case, and the water and warmth will do the rest. It needs to be done sooner rather than later though, or the rescued seedling will have lost too much vigour to be able to catch up.
Posted by Rebsie Fairholm at 5:38 pm

I hate to see a seedling with its case stuck on too. Although I'd not heard about the tea bag thing, I just use a pair of tweezers to gently pull it off... Perhaps I'm risking damaging the seedling like this though...

That tea idea is a top tip, Rosie. Not heard that before. Celeriac seeds also get hung up on their seed case from time to time, so I'll give this a go.

Tweezers is fine, as long as it pulls off easily.

Soilman, if nothing else it's a great excuse to drink more tea.

The tea bag thing is really interesting! I don't 'do' tea really but will be happy to make the odd brew if it helps my babies!

I shall watch out for the Tricotyledonous mutation. I sowed Pretty in Purple (amongst others) last weekend. I felt slightly out-on-a-limb from what I'd read re dire warnings about heat and light, so I'm very glad to know I'm not alone!

I've had a lot of luck getting the seed case to come off with just a drop of saliva (I know that sounds gross, but it really works) and sometimes even just warm water.

One of my tomato varieties, Persimmon, sprouded with the tricotyledonous mutation. It's a very healthy seedling otherwise. I'm anxious to see if it grows any differently.

Thats a great tip about the teabags, Rebsie!

We love the Tesco finest pointy peppers .. we bake them stuffed with feta, cherry tomatoes and pesto (yum!).. so I think I'll have a go at growing some :-)

I don't have a heated propagator, and I've been worrying about it.. I feel much better hearing that you manage without!

I do like to use recycled bits and bobs for my seedlings and make my own DIY cold frames, so its good to know that you can be successful like this.

Lots of great information, Thanks!

I've used saliva on stuck seed cases too. :) Anything warm and wet will do the trick, but tea just has the added advantage of having tannin in it, so it's useful for the ones that have got really stuck.

I assume tricotyledonous mutations have no disadvantage from their extra leaf. The main purpose of cotyledons is to start the process of photosynthesis and enable the plant to sustain itself, so three may be better than two! I'd be interested to hear how the Persimmon seedling gets on.

Hedgewitch, I sowed some Tesco's red pointy pepper seeds last week and have 100% germination within 7 days ... that's the fastest pepper germination I've ever had. Simply with a flowerpot on a windowsill, about 1ft above a radiator. It's always good to break the rules and see what you can get away with.

I love this blog so much I have to check it constantly. it is good to share the passions of a devoted gardener and adventuress.

I use chamomile tea bags (slightly warm) squeezed over my stuck seed heads. The chamomile is also an anti fungal (stops damping off etc) drink I administer to my young seedlings to keep them healthy.

Thanks Sharon, I appreciate that!

A good tip about the chamomile tea too.

Great blog, thanks for this post - I never heard of the tea bag thing, I know I'm a tad behind the times here - but it is a new one on me.